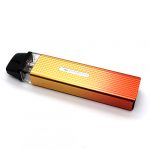 The XROS Mini is the follow up to the excellent VAPORESSO XROS that came out mid-2020. As the name suggests, the XROS Mini is smaller and lighter but still aims to deliver as good of a vaping experience as its full-sized sibling does. This is a MTL device designed to be used with nicotine salt ejuices.

Looking at the two devices side-by-side, a few changes stick out immediately. Firstly, the XROS Mini does not have a fire button and is purely draw-activated. Another change is that it does not feature an airflow control slider. Last on the list of obvious changes is the design. The XROS Mini is not only smaller, but it looks less plain too.

Despite being smaller than the XROS, the battery size on the XROS Mini has been increased from 800mAh to 1000mAh. It still features Type-C charging.

This device was sent to me by VAPORESSO for the purpose of this review.

The XROS Mini is, not surprisingly, a mini version of the VAPORESSO XROS. Standing the two devices up side by side reveals a lot of similarities, but also a few differences. The most obvious difference is the size.

The XROS Mini is quite a bit shorter at 98.9mm tall compared to the 112mm of the XROS. But they’re actually nearly identical in their other measurements with both coming in at around 23mm wide and 13.5mm deep. I like the shorter size of the XROS Mini. It’s nice and light, it has a nice hand feel, and it’s even easier to pocket.

The diamond pattern on the face of the XROS Mini looks great and it’s practical too. It gives the device a little extra grip and gives it a unique look. The Orange Red color that I’m using looks like a sunset; it’s pretty awesome. The paint seems to be of good quality too. It hasn’t scratched, chipped, or faded so it looks like it will stay looking good for a while.

Also on the front face of the XROS Mini is a small metal plate that says VAPORESSO, along with an LED indicator. This metal plate has a very, very fine mesh pattern that is subtle, but a nice fine detail. There is no fire or power button because the XROS Mini is draw-activated only.

On each side of the body, just underneath the pod, is a small pin-sized airflow hole. There’s no airflow adjustment. From the size of the airflow holes alone you can tell that this is going to deliver a tight MTL draw.

As usual, my unit is marked as a sample so some things could change for the retail version but as it is now, I don’t have any complaints about the design or build quality. There is a little bit of pod wiggle but that’s the only thing that I could find. 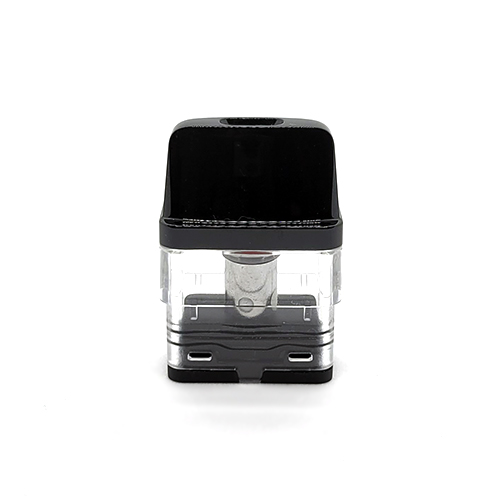 Something that I absolutely love about these pods is that they are completely clear. There’s no sort of tint to them at all. They also sit in the battery in a way that leaves nearly the whole pod contents completely visible. There’s no need to remove the pod or struggle holding it up to the light to check your ejuice level. A quick glance at the pod is all you need to know if you need more ejuice.

Filling the pod requires you to remove the mouthpiece. I found it easiest to remove by leaving the pod in the battery and pushing the cap backwards. When you do it like this the cap pops off much easier. The fill port is similar to a lot of VAPORESSO’s other pods. It’s a hole with a self-closing membrane that opens up when you insert your bottle tip, and closes itself when you remove it. It works better than you might think and it hasn’t leaked at all. It properly seals itself so it’s actually quite convenient and secure. 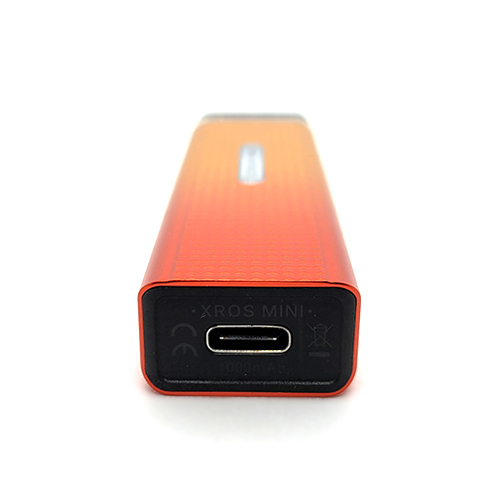 The XROS Mini may be smaller than the XROS, but VAPORESSO still managed to cram in an even larger battery. Built into the XROS Mini is a 1000mAh battery that recharges through a Type-C port on the bottom of the device.

Because of the low 11W or 16W output of the XROS Mini (depending on the pod that you use), the 1000mAh battery lasts through quite a bit of heavy vaping. While using the included 1.2Ω pod I vaped consistently for 2 full days before the battery died. Obviously the battery life will depend on how much you vape, but if I can get 2 days out of it you can expect the same or better.

The LED on the front face lights up each time you take a draw and the color indicates your battery level. There are three colors: 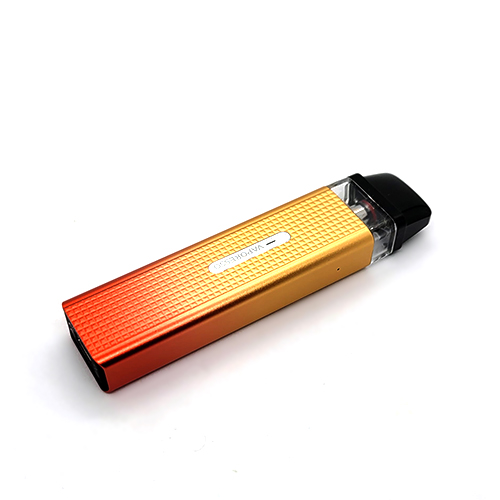 The XROS only comes with one pod, a 1.2Ω single wire pod, so that’s what this performance section is going to be based on. There is also a 0.8Ω pod available but I do not have it available to test out. As I mentioned previously, the XROS Mini is also compatible with the pods for the XROS.

This new updated 1.2Ω pod has a draw that is comparable to the original XROS and its 1.2Ω pod with the airflow fully closed. It’s a very tight mouth to lung draw, a little tighter than I prefer, but good nonetheless. This pod fires at 11W and the XROS Mini delivers warm, verging on hot vapor.

I used a few different nicotine salt ejuices that varied from 24mg to 36mg, and from 40VG to 50VG. You won’t win any cloud chucking competitions with the XROS Mini but it still produces decent clouds. The draw and throat hit are what I want from a nic salt device. Last but maybe most important, the flavor is excellent. I thought that the original XROS and its 1.2Ω pod delivered good flavor and this is even a notch better.

I had no leaking or performance issues while using the XROS Mini. No spitback, no popping, and no dry hits. The 1.2Ω pod wicked everything without an issue and managed to stay wet even with heavy vaping. The draw activated firing also worked without an issue.

The XROS Mini is an excellent little pod vape. It’s more compact than the original XROS but it delivers performance that far exceeds its size. The only major con is that it only comes with one pod, but this is easily fixed by purchasing an extra pack of pods when you buy it.

If you like your draw to be a super tight MTL, the XROS Mini provides one of the best tight MTL draws available on the market. The flavor is excellent and with no performance issues to speak of, there’s no trade off or compromise.

What do you think about the VAPORESSO XROS Mini? Leave a comment with your thoughts.