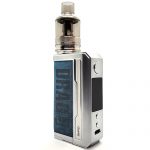 The Voopoo Drag 3 is the newest addition to the ever popular Drag family of vape mods. It all started with the original Drag which quickly gained a reputation as a solid and reliable dual battery mod. Since then, Voopoo has released the Drag 2 and Drag Mini mods, the Drag Nano pod vape, and the Drag X, Drag S, and Drag Max pod mods. No matter how you want to vape, there’s a “Drag” mod for you.

The Drag 3 marks Voopoo’s first return to a dual battery 510 mod since the Argus GT of last year. It takes two 18650 batteries and uses the Gene.Fan 2.0 chipset to fire at up to 177W. The kit comes with the TPP Tank and a 510 adapter that allows it to be used on the Drag 3 and any other mod with a 510 connection. This TPP Tank is also compatible with previous Voopoo pod mods like the Argus, Argus Pro, Argus X, Drag Max, Drag X & Drag S. Likewise, the 510 adapter allows the Drag 3 to be used with all PnP tanks.

This device was sent to me by Voopoo for the purpose of this review. 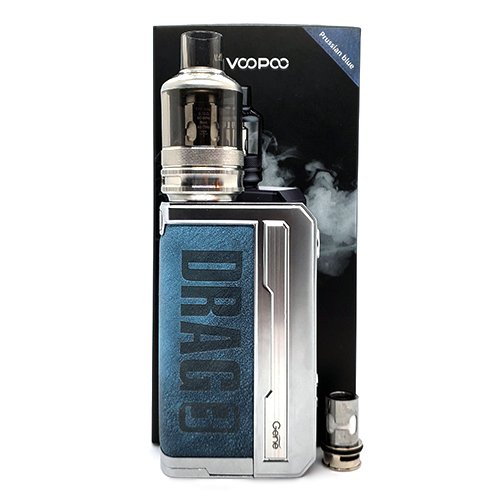 The Drag 3 has been given a complete redesign compared to its predecessors. The original Drag and Drag 2 looked very similar to one another but the Drag 3 looks nothing like them. Gone are the resin panels, large printed ‘DRAG’ logo, and rounded frame. Instead, the Drag 3 is wrapped in high-quality leather and features a more boxy and straight design. This leather is stamped with “DRAG 3” on one side and a small “VOOPOO” logo on the other. This isn’t a new design though; the Drag 3 is almost identical to the Drag Max that Voopoo released late last year. There are a few small changes but it’s virtually the same mod.

The zinc-alloy frame and brushed metal inlays wrap and surround the leather and give the Drag 3 a high-end, premium look and feel. This frame comes painted in silver or black, depending on the color option that you choose. On the back side of the mod, just below the 510 connector, is a small metal “DRAG” nameplate.

It’s still too early to say for sure but compared to the Drag and Drag 2, it seems like Voopoo have improved the paint quality. My paint is still perfectly intact, even on the bottom of the mod, but I’ll have to see how it holds up after a few months of use.

The Drag 3 is average sized but actually quite lightweight for a dual battery mod. This makes it ideal for trips out of the house (not that I’ve been able to do that in the midst of this pandemic) and it’s not too big or heavy to put in your pocket. One of the few complaints I have is that if you grip it too tightly the straight edges make the mod a little uncomfortable to hold.

The 510 connector plate is located off-center towards the back side of the mod. Atomizers up to 24mm won’t overhang but a 25mm tank overhangs just the slightest bit; it’s barely noticeable. The 510 connector plate is raised just the slightest bit and tanks don’t sit completely flush. This is not very noticeable but if you’re like me then it’s going to bug you. On the bright side, this should keep tanks from scratching up the top of the mod.

The screen is a large full-color display that is identical to the one on the Drag Max. It’s high-resolution, bright, and crisp. This screen displays individual battery life indicators, mode, wattage, a puff counter, voltage, coil resistance, and puff time.

The battery door on the Drag 3 slides out and then opens up. It’s spring-loaded and works well, but it feels fragile and floppy. There’s a lot of side-to-side wiggle when the battery door is open and that concerns me. I feel like there’s a good chance that this door will break in the long-term but this is just speculation based on how the door feels. Who knows? I hope that I’m wrong here but that’s my observation. 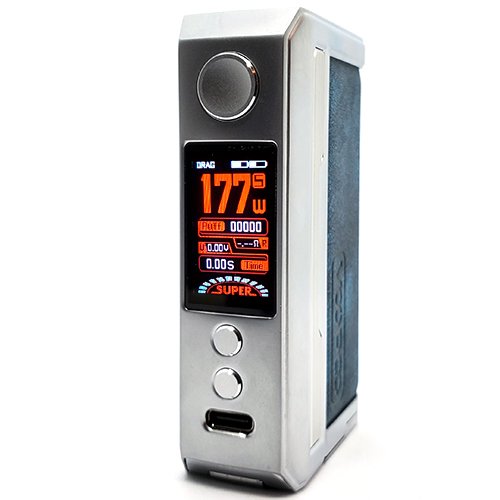 The Drag 3 uses the Gene.Fan 2.0 chipset which was first used in the Drag Max. This chip allows the Drag 3 to fire from 5-177W and brings Smart mode, RBA (standard Wattage) mode, and TC modes.

Smart mode is meant for use with the included TPP tank or Voopoo’s PnP tanks, and TPP or PnP coils. In Smart mode the wattage is restricted to the max wattage rating of the coil to prevent you from burning it. Smart mode also automatically sets the mod to the ideal wattage for your coil when you insert the pod. This is great for new vapers who aren’t sure how high they should set the wattage and also prevents the mod from accidentally being set too high.

RBA mode works like your standard wattage mode and is for use with other non-Voopoo subohm tanks and RBAs. In RBA mode you can set the wattage as high as you like with no restrictions. To switch modes press the fire button three times.

Out of the box the Drag 3 only comes with Smart mode and RBA mode enabled. If you want to use TC then you’ll have to download the Voopoo software program and Drag 3 firmware update from their support page.

After downloading both, plug your Drag 3 into your computer and run the Voopoo configuration program. Select ‘Upgrade’ from the panel on the upper left hand side and then hit ‘Choose’ on the upper right hand side of the screen. Select the Drag 3 firmware that you downloaded and then hit ‘Download(U)’. Your Drag 3 will turn off as the firmware update is installed. Once it’s complete you can unplug your Drag 3. You now have TC mode!

There are 3 TC modes: NI, TI, and SS. When you’re in TC mode you can scroll all the way down to change from F° to C° and vice versa. You can hold both adjustment buttons to enter the TC configuration menu where you can change the TCR value, adjust the wattage, and set the coil resistance.

You can select from two UI’s: Iron (portrait orientation) or Core (landscape orientation). They both look very similar but the ‘Core’ UI looks a bit more high-tech and futuristic. I don’t have a real preference as I think they both look neat but I found myself using the ‘Iron’ portrait UI most of the time.

The TPP (Tank Pod Push) Tank is Voopoo’s new tank and it’s an extremely versatile one. It’s a pod-style tank that is compatible with the Argus, Argus Pro, Argus X, Drag Max, Drag X & Drag S. It also comes with a 510 adapter that allows it to be used on the Drag 3 and any other mod with a 510 connector. Additionally, this 510 adapter is also compatible with Voopoo’s PnP tanks so you can use them on the Drag 3 as well. The Drag 3 and TPP Tank come with two new TPP coils: a DM1 0.15ohm coil and a DM2 0.20ohm coil.

The TPP Tank matches and compliments the look of the Drag 3. It looks like the PnP tanks, only it’s larger and has a metal plate that surrounds the drip tip. The 510 adapter that it sits in features a band of knurling and two bands of etched lines that run along the airflow control ring. The metal plate around the drip tip and 510 adapter match the color of the Drag 3: if you get one with a silver frame it will be silver, if your Drag 3 has a black frame then it will be black.

Depending on the coil that you use you can go from a direct lung draw with the airflow open, down to a restricted lung hit with the airflow nearly closed up. With the wide bore of the drip tip and the large size of this pod tank, the TPP Tank will work best with DL coils for DL vaping. If you want a MTL vape you’re better off with the MTL PnP tank.

Voopoo says that these coils have a larger surface area inside the coil and also heat up faster. The 0.15ohm coil is supposed to be used from 60-80W and Voopoo says that it’s best from 65-75W. At 65W I get warm vapor and a good amount of flavor but it feels like it can be better. Increasing the wattage to 70W makes the vapor a little warmer, more to my liking, and the flavor gets better too. Vaping at 75-80W the vapor is hot and the flavor is not that much better than it is at 70W. My preferred wattage for this coil is 70W because you get the best flavor from the coil and the vapor is nice and warm.

The 0.20ohm coil is supposed to be used from 40-60W and best from 50-55W. This coil has even better flavor and gives a really nice vape at 55W. 40W is much too cool and flavor is seriously lacking at this wattage. 50W is warmer but still on the cool side of things but the flavor is noticeably better. 55W is the sweet spot for warm vapor and nice flavor. 60W is warmer but still not hot. If you like a hotter vape I would suggest using the 0.15ohm coil. But if you like a warm vape then this coil is the one to use.

Although good performers, these coils leaked some ejuice even with 80VG. I didn’t have any messes or ejuice pouring out of the airflow holes but ejuice collected in the base of the airflow control ring. It was never a substantial amount of ejuice but enough to be noticeable and to warrant mentioning.

The Drag 3 has been a good, reliable mod to use. In Smart mode it accurately detects the resistance of the coil and sets the limits accordingly. I did have a few instances where it read the resistance wrong but this was infrequent and easily corrected by lifting the pod out and putting it back in.

Wattage mode works as it should. It fires instantly and delivers consistent power. Temperature Control mode is also pretty good. TCR for stainless steel only goes down to 1000 so this is the value I used for SS316L. While it can be inconsistent at times, it’s very usable and never once gave me a dry hit. It’s not the best TC out there by any means but I don’t mind using it at all.

Voopoo completely redesigned the Drag 3 and I love what they’ve done with it. It’s a great looking mod that feels high-end as well. Paired with the TPP tank & 510 adapter it’s a really great kit that affords a ton of possibilities for how you want to use it. You can use PnP tanks with the 510 adapter on the Drag 3, use the TPP tank, or you can use any tank that uses a 510 connection.

On its own the Drag 3 is still a really solid mod. The wattage mode performance is perfect and it even has a very usable TC mode with TCR. If you liked previous Drag mods then you’ll like the Drag 3 even more. This is definitely a mod and kit worth picking up.