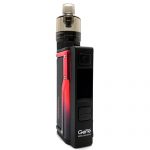 The Argus GT Kit is a new box mod and tank kit by Voopoo. Voopoo became a household name after their Drag series of box mods, but since then they’ve mainly been releasing pod vapes. Most recently we have reviewed the Voopoo Argus Air, Voopoo Drag X & Drag S, and Voopoo Vinci Air.

Voopoo haven’t forgotten what made them popular though. The Argus GT is a super slim and lightweight dual 18650 box mod that Voopoo says is made for outdoor enthusiasts. It has a maximum wattage output of 160W and it has power mode and TC modes.

Is the Argus GT kit worth picking up? Read on to find out!

The Argus GT Kit was sent to me by Voopoo for the purpose of this review. 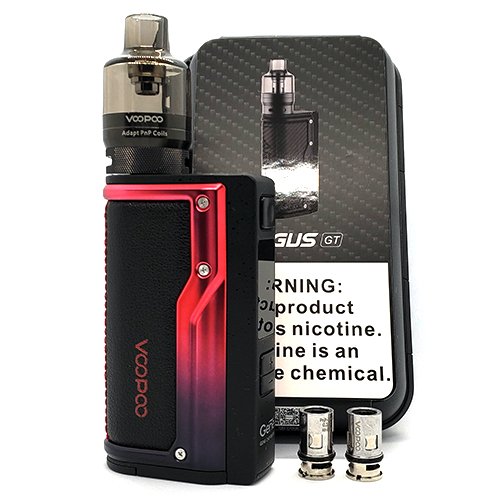 The Argus GT Kit comes in a sturdy and compact travel case. It has a latch that clicks closed and a soft foam interior. There is a large Voopoo logo on the outside of the case that looks pretty neat. I’m impressed by the quality of this travel case as it’s actually really good. I can’t see this case being used for daily errands, but if you’re going camping, travelling, or to the beach then it will be useful.

The first thing I noticed about the Argus GT is its size. This is a really small box mod. I knew that it was supposed to take dual 18650 batteries but I couldn’t see how they would fit. I had to open the battery door to make sure that there was actually space!

The Argus GT is a mere 82mm tall, 52mm wide, and 26mm thick which is just barely bigger than the 18650 batteries that it holds. This is definitely one of the smaller dual 18650 mods that I’ve ever seen. It’s ultra lightweight too because it’s made primarily out of zinc alloy. Without the batteries installed it barely weighs a thing. Even with batteries and a full tank of ejuice in the pod the Argus GT remains featherlight.

The design of this mod is very nice. The slim rectangular shape looks great and it’s nice to hold as well. The body of the mod is finished in a matte black paint with a speckled pattern that gives it a wet appearance. It looks like it was showered with tiny drops of water which is definitely a unique look.

The leather grip on the Argus GT is high-quality and it feels really nice. It’s cushiony and makes holding the mod a pleasure. The “ARGUS” that is printed on the leather is also high-quality and hasn’t faded or worn during my testing. The pinstripe stitching that runs down the back of the leather is good too. The color of the stitching matches the color of the metal bezel on the Argus GT so depending on the color you get, the stitching will be colored to match.

The metal bezel is a one weak point in the build quality. Everything else on the Argus GT has been durable and wear/scratch resistant but the metal bezel hasn’t held up so well. It looks good when it’s brand new; my Black&Red color has a shiny red paint that fades into black towards the bottom of the bezel.

But after a few days of use the paint started to scratch and chip, even though I’ve been taking good care of it. I never dropped the Argus GT or otherwise mistreated it. It’s really unfortunate too because the paint on the bezel looks so good.

The 510 plate is standard stuff. It’s spring loaded and the pin has good travel to it. The Argus GT can take up to 26mm atomizers without overhang which isn’t too bad considering how slim it is. The included PNP Pod Tank looks right at home on this mod.

The fire and adjustment buttons look and feel great. They’re all rectangle shaped and work with a satisfying click. The fire button rattles a bit if you shake the mod but it’s nothing too extreme. All in all the buttons are very good.

The screen on the Argus GT is bright and full color. It’s well organized and the UI is perfect. It displays individual battery life indicators, wattage, coil resistance, voltage, puff time, and a puff counter.

The battery compartment is small but it’s not tight. Batteries slide in and out with ease and it’s not too crammed that it will damage your battery wraps. The battery door is on a hinge but it also slides in and locks into place. The hinge feels a little flimsy, but on the bright side: if it breaks it shouldn’t render the mod unusable as you can still slide the door in place and into a locked position. 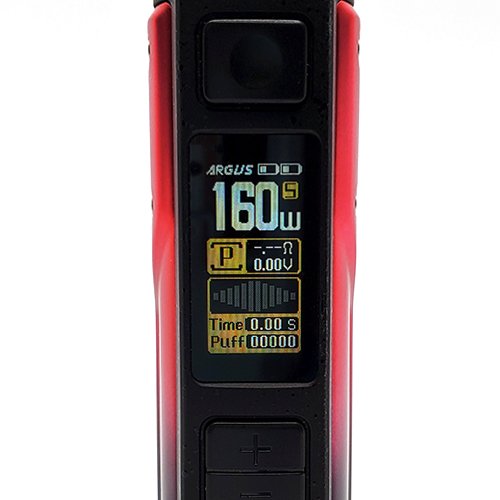 The Argus GT is a relatively simple box mod. It doesn’t have a mountain of modes and features or an in-depth menu like some other mods, but it’s easy to use and has the necessary modes needed to enjoy vaping with it. The Argus GT uses the GENE.TT chipset and can go up to 160W. It comes with power mode, an RBA mode, and three TC modes.

Three presses on the fire button will change to the next mode. The RBA mode can be used with the PNP tank and RBA coil and with other tanks that aren’t the PNP tank. The difference between the regular wattage mode and RBA mode is that the standard wattage mode limits the maximum power that you can set for your coil. This is to prevent burning the PNP tank coils.

There are three TC modes: Nickel, Titanium, and Stainless Steel. Press the fire button three times to cycle through the modes until you get to a menu with “NI, TI, SS”. Use the adjustment buttons to select the mode appropriate for the wire you’re using and hold the fire button to select it.

When you’re in a TC mode you can hold the + and – adjustment buttons to bring up a menu. In this menu you can change the TCR value, set the wattage, and set your coil resistance.

Device On or Off: Click the fire button five times.

Change TC settings: In a TC mode hold the + and – adjustment buttons to bring up the TC settings menu. Here you can adjust the TCR value, set your wattage, and set your coil resistance.

The PNP Pod Tank is the same pod that comes with the Voopoo Drag X & Drag S pod mods, but with a 510 adapter. I can’t say that I’m surprised to see this tank with the 510 adapter though. Voopoo had released a 510 adapter to use this PNP pod on any tank, so it was only natural that they would include it with a future box mod release.

Still, while not surprising, it’s still awesome that this tank and the 510 adapter come with the Argus GT. The flavor from this tank and coils are absolutely amazing on the Drag X & S so being able to use it on a box mod is like an early christmas gift.

The PNP Pod Tank is round and has a dome shape that ends at a large round mouthpiece. The pod is lightly tinted which makes seeing your ejuice level a non-issue. Magnets hold the pod into the 510 adapter and they are super strong. There’s no wiggle whatsoever with the pod inserted into the adapter.

One of these coils comes with the Drag X and the other with the Drag S. Both of these coils are suited for regular nicotine ejuices that are less than 10mg in strength. These coils install just like Voopoo’s other PNP coils and simply push into the bottom of the pod. You can use any of Voopoo’s other PNP coils with this tank so if you have spare Vinci coils laying around then you can use them in this tank.

The PNP Pod Tank works great with all sorts of PG/VG ratio ejuices from 60-80VG. I used a 6mg nicotine strength ejuice with both coils.

The 0.15ohm coil is the winner out of these two coils though. The flavor is impressive and noticeably better than the other coil. Although this coil is rated for 60-80W, I found that it performed best in the 50-60W range and I usually vaped it from 50-55W. I kept the airflow either fully open or only slightly closed and the vapor is still very, very warm. It’s a hot vape that really delivers on flavor and clouds.

Although these coils perform great, what impressed me the most is not the flavor. I had the faintest bits of condensation on the bottom of the pod and the contacts, but otherwise there was no eliquid to be found. The bottom of the adapter stayed nearly completely dry and I didn’t have any instances of leakage.

Speaking specifically on the performance of the Argus GT mod, it’s been nothing but reliable. The GENE.TT chipset allows it to fire instantly when pressing the fire button and the power is consistent. While it doesn’t have a lot of modes or features, it works perfectly for simple vaping and if that’s all you’re looking for in a mod then the Argus GT is great.

I’ve already used the PNP Pod tank with the Drag X & S so it’s no surprise that this kit delivers great flavor and performance. The 510 adapter is really neat because if you already own the Drag X or Drag S, you can swap around pods and use them interchangeably with the Argus GT.

The Argus GT itself is a great mod. It’s one of the smallest and most lightweight dual battery box mods available and it’s got good looks too. The only real issue is that the paint from the metal bezel isn’t great but this is purely cosmetic. Otherwise, the performance aspect of the Argus GT is on point, just basic in what it can do.

If you’re a simple vaper that only uses power mode or TC mode and don’t care about variable voltage, bypass, or fancy modes, then the Argus GT will make you happy.

I highly recommend picking up the kit for the awesome PNP Pod Tank & 510 Adapter.