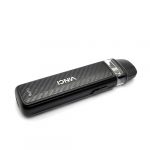 It’s been a while since Voopoo released a new pod vape. Their V series devices never gained a lot of traction and their Argus Air, while it was a decent pod vape, never gained the type of following that their Drag series of devices garnered.

At the moment, the pod vape market is huge. I’m strictly talking about the market for small devices with built-in batteries; if you also include pod mods then this market is even larger. With the amount of vapers using these types of devices, it’s no wonder that every vaping manufacturer is trying to get a piece of the pie.

It’s a very small, very light device and it’s made to be as easy to use as possible. It’s purely draw activated and uses 2ml pods with non-removable, built-in coils. The Vinci Pod has a 800mAh battery and charges via a Type-C charging port. Last but not least, it features an airflow control switch that allows you to switch between 2 airflow settings.

Could this be Voopoo’s big break into the pod vape market?

The Vinci Pod Kit was sent to me by Voopoo for this review.

After taking the Vinci Pod out of the box, I instantly loved the look and feel. The size, hand feel, and design all made me think “Damn, this is a nice device”. The size and shape give me Smok Novo or Novo 2 vibes, but this Vinci Pod looks and feels much more refined and premium.

There are 7 colors available: Carbon Fiber, Pine Grey, Dazzling Line, Aurora Red, Aurora Neon, Aurora Pastel, and Aurora Silver. I haven’t seen the Aurora color on the Vinci Pod, only on the Vinci Air, but I would guess that the finish would be similar. If you like designs that ‘pop’, the Aurora colors are the way to go.

If however, you’re like me and prefer that your vapes don’t stand out too much, the Carbon Fiber is the way to go. It’s all black with a matte carbon fiber panel that looks cool but isn’t too overstated.

As I mentioned before, the Vinci Pod is tiny. It’s 93.5mm tall, 24mm wide, and 14mm thick — really a minute device. The zinc-alloy body feels excellent in my hand and it only weighs 58 grams.

The whole body of the Vinci Pod features slight curves that give it a clean and modern look that I really dig. One con I found is that the bottom is also curved so it’s not very stable if you stand it upright, but this is me being nitpicky.

On the front face there’s a small Gene logo near the bottom of the panel. This Gene logo lights up when you take a puff to tell you your battery charge level. You would never think that it’s an LED so it’s cool how they integrated it into the logo. 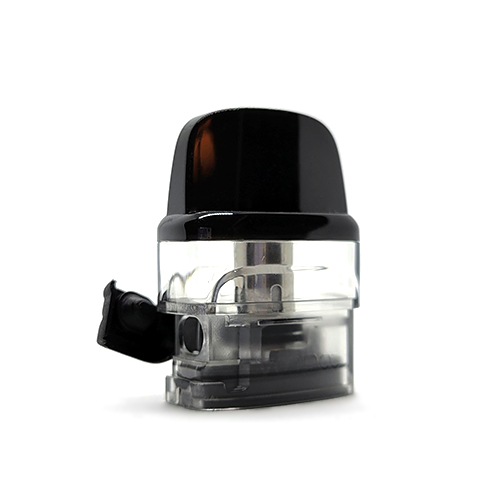 The Vinci Pod uses pods with non-removable, built-in coils which makes it a ‘true’ pod vape. Disappointingly, the kit only comes with 1 pod. Come on Voopoo, you couldn’t have thrown in an extra? This is a big con for me — all devices should come with at least 2 coils/pods.

The pod holds 2ml of ejuice and houses a 0.8Ω coil inside. You fill the pod by unplugging the rubber stopper on the side of the pod which then reveals a large round fill port. The stopper is sturdy and deep which prevents any ejuice from leaking out from the fill hole.

There are no magnets here to secure the pod. Rather, it pressure fits and clicks into place with no movement or wiggling once inserted. Something I really like is that the majority of the pod is still visible when it’s inserted. The pod is clear too so a quick glance lets you easily see how much ejuice you have left. The drip tip on the pod is black plastic and forms a nice shape that is comfortable to vape on.

On one hand, this is just another pod. But on the other hand, I like the small things that Voopoo has done with it. The clear pod seems simple, but the ease of checking my ejuice level is very convenient. I only wish that they would have included an extra pod!

How to Use the Vinci Pod 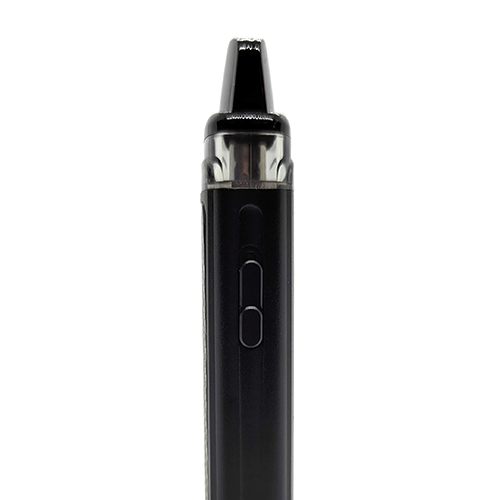 You’ll want to start by removing the device from the box (you can’t use it if it’s still in the packaging, now can you). The pod comes already inserted but you’ll want to remove it from the battery and pull off the plastic at the bottom of the pod. With this done, take your ejuice of choice (nicotine salt ejuices will work best with the Vinci Pod), unplug the fill port, and fill the pod up.

Wait a few minutes for the pod and wick to become fully saturated with ejuice. Once the wait is over you can insert the pod and set the airflow switch to the down position. Draw on the mouthpiece to vape and see how you like it. If you find the draw is too loose then you can set the airflow switch to the up position for a tighter draw. That’s all there is to using the Vinci Pod.

Because of how simple it is to set up and use, this makes a really good device for new vapers. Heck, even I like it a lot and I’m nowhere close to a beginner. If you or someone you know wants to stop smoking and get into vaping, this is a good device to do it with. A 35mg nicotine salt vapes just perfectly and provides a solid throat hit too. 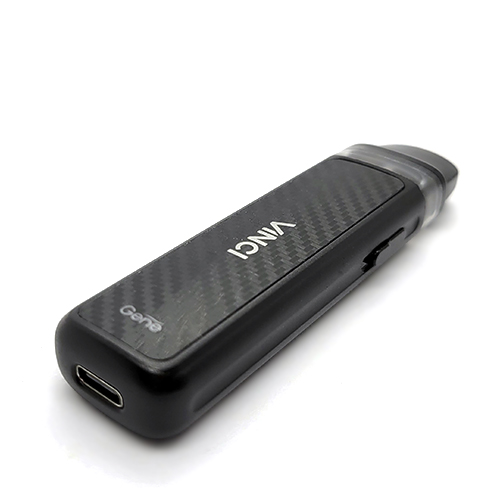 The Vinci Pod is a tiny little device so it’s no surprise that it doesn’t pack the largest battery. The 800mAh battery does manage to last for quite a long time though, mainly due to the fact that it uses a 0.8Ω coil and has a maximum wattage output of 15W.

I consistently vaped a pod and a half of ejuice before having to charge back up. This is just about a day of heavy use so make sure that you’re within range of a charger if you’re going to be using it a lot. It charges back quite quickly using a Type-C cable though; plugged into my computer it takes 40 minutes to fully recharge.

Unfortunately, the Vinci Pod does not feature pass-thru charging so you have to unplug it to take a draw, or wait for it to finish charging. 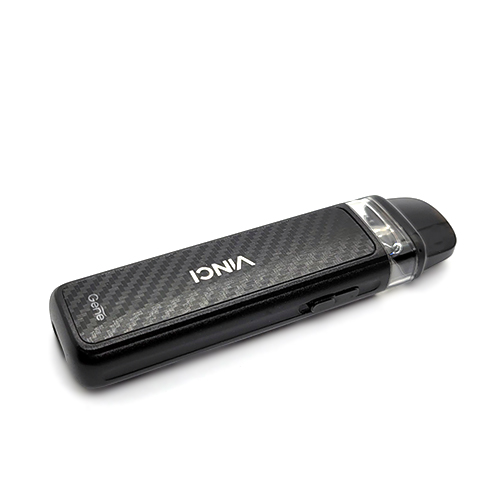 Before I started using it, I really wasn’t sure what to expect from the Vinci Pod. Voopoo’s previous pod vapes have been decent but they’ve never been devices that I would use as my first pick. Because of this, I honestly went into this review expecting the Vinci Pod to be more of the same story.

But I was wrong. For the first time, I can say that this is a device that I would pick up first, even if given other great options. Why? Well there are a few good reasons.

One is the draw. The airflow switch lets you go from a tight mouth to lung draw to an even tighter mouth to lung draw just by flicking the switch one way or the other. The draw is great both ways, however I prefer the looser mouth to lung setting. It’s easy to flick the switch and vape it the other way for a few draws then go back. Quite often, this is what I ended up doing. When I felt I wanted a denser draw I would switch to the tighter MTL and then switch it back when I was satisfied.

Another reason why I like the Vinci Pod is the flavor. It’s a small device but it packs a flavor punch. My ejuices taste concentrated and full — just how they should taste in a good device. The 15W output also produces a nice, warm vapor that is just a pleasure to vape.

The throat hit is also solid and just overall on point. I used a 35mg and a 50mg nicotine salt ejuice (both 50/50) and they vaped wonderfully. The 50mg obviously provided a much stronger draw and throat hit but it wasn’t overwhelming. For me, it was just right without being too strong. The 35mg salt was more mellow, but still satisfying enough for me to vape on it all day long without craving more nicotine.

I had no performance issues at all while using the Vinci Pod. The battery under the pod stayed completely dry, even after multiple refills. I would say that pod life is above average and bordering above average, although I’ll have to see if it lasts for a few more refills to make that call.

The draw activation also worked without a hitch. You don’t have to pull too hard to get it to activate and it doesn’t activate too easily either. It’s a good middle ground and seems to be fine-tuned to the perfect sensitivity.

While they didn’t have a signature pod device before, I think that the Vinci Pod is Voopoo’s new champion. It’s an excellent device for nicotine salts that just works, while still providing a simple way to alter the airflow to better suit your vaping style. The flavor is outstanding for a pod device and the draw and throat hit are just as good. Add these pros to the fact that I had no performance issues and you’ve got a device that easily gets my recommendation.

That being said, I would highly recommend buying yourself an extra pack of pods to go with the Vinci Pod because you only get one pod in the box. If you accidentally burn that one (for example, by not properly priming it) you’re going to be upset. Pick up a pack of pods and you’ll be set to vape without worry of burning out your only pod.

Have you used the Vinci Pod yet? Let me know what you think of it.