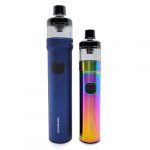 Vape pens are a segment of the vaping market that seem to have been left in the past and forgotten. Every week there are new box mods, sub ohm tanks, and pod vapes (but let’s be honest, it’s mostly new pod vapes). Vape pens, on the other hand, are very seldom released. For people who like the form factor, this leaves very limited options when purchasing a new device.

Other companies may have forgotten the vape pen, but not Vaporesso. Recently they’ve released not one, not two… Wait, it is just two new vape pens. But still, two is better than one right!

The GTX GO 80 and GTX GO 40 are vape pen pod kits that will fire up to 80W and 40W respectively. One is big (GTX GO 80) and the other is more compact (GTX GO 40). There’s no wattage adjustment on these babies because they adjust the power output automatically according to the coil that you’re using. They’re very straightforward devices. 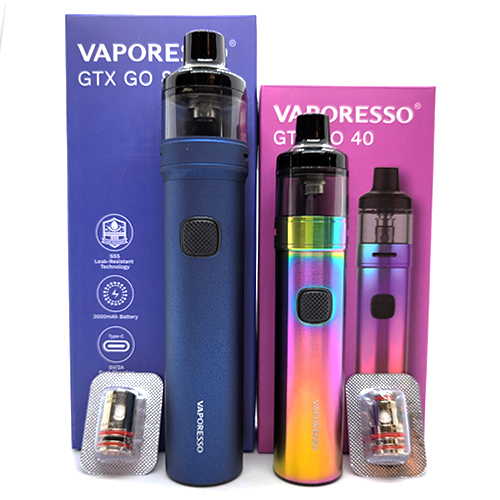 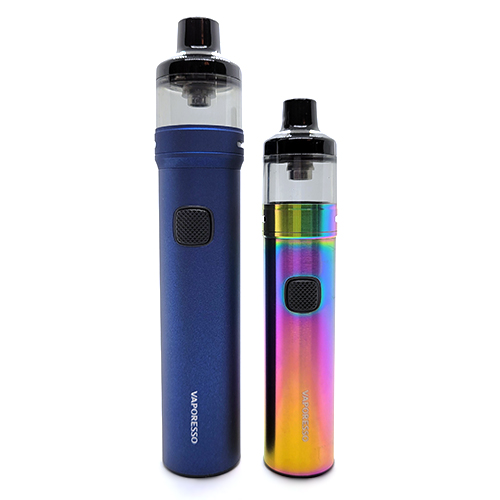 Both the GTX GO 80 and GTX GO 40 look how you would expect a vape pen to look. They’re each taller than they are wide and have a tube shaped body. While I still consider these to be vape pens due to their shape, they could more accurately be called vape pen pod kits because these don’t have a 510 connector. Instead, they use pod style tanks.

The GTX GO 80 is the larger of the two devices. It stands 133.2mm tall with the tank inserted and has a 26mm diameter. This is about the size of your average vape pen and I find the diameter fits comfortably in my hand. My blue review unit has a soft touch rubber coating that looks sleek and feels good to the touch. The GTX GO 80 will fire at up to 80W with the power output depending on the GTX coil that you use.

The GTX GO 40 is the GTX GO 80’s little brother. It’s significantly more compact with its 110.3mm height and 22mm diameter which makes it the more portable device of the two. The 22mm diameter isn’t as comfortable to hold but it doesn’t feel bad in the hand. The color of the one that I received is a rainbow finish which doesn’t come with the soft touch rubber. It looks good but it definitely doesn’t feel as nice as the rubber coating. 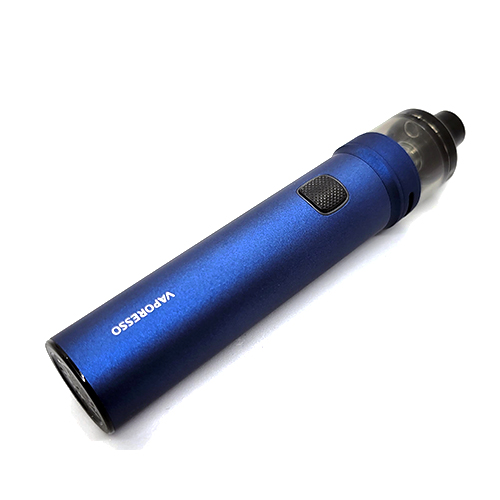 Both devices have a simple VAPORESSO logo towards the bottom of the device and no other branding. There’s a single square fire button with rounded edges and cross-hatching for grip. The fire buttons are surrounded by an LED ring that lights up when activated and the color indicates the battery charge level.

What I found interesting is that my GTX GO 40 looks like it has adjustable power output, but there’s nothing in the user manual or on the Vaporesso website to indicate that it does. What I mean is that if I press the fire button 3 times, the LED ring on the GTX GO 40 will flash red, blue, or green, as if the power output is being changed. However, there doesn’t seem to be any noticeable difference in the draw; the three “power outputs” all feel the same. The GTX GO 80 does not behave in the same way and does not do anything when I press the fire button 3 times.

According to the user manual, both devices will automatically adjust the power output depending on the coil that you use. Hm.

Right from the get-go I had an issue with both of these because they only come with 1 coil each. That’s disappointing to see because as a consumer, I like having another coil to try out. An extra coil also serves as a buffer for if you burn the fire one or get a dud coil. Thumbs down here!

Both of the GTX GO devices use a similar pod tank but there are a few key differences between the two.

The GTX GO 80 comes with the GTX POD 26 which has a 5ml ejuice capacity. This pod tank is compatible with all GTX coils, including the RBA coil. Vaporesso’s GTX line of coils is one of the most vast coil lines currently available. That gives you plenty of options for resistances and vaping style, but keep in mind that the 26mm tank diameter and airflow setup is best suited to direct lung or restricted direct lung vaping.

With the GTX GO 40 you get the GTX POD 22 which is essentially a smaller version on the POD 26. This pod tank has a slightly smaller 3.5ml capacity but the main difference is the drastically limited coil options. This pod tank is not compatible with all GTX coils — it will take the GTX 0.3Ω coil, 0.6Ω mesh coil, 0.8Ω mesh coil, or 1.2Ω mesh coil. These are mostly MTL oriented coils but you have the option of using the 0.3Ω if you want a DL vape.

The pods have four strong magnets that pull and attach strongly to the battery. They sit very snugly when inserted but can still be easily turned to adjust the airflow. I’ve dropped each of the GTX GO devices a few times and the pod stayed attached so you don’t need to worry about it popping out in your pocket.

The tanks are top filled through a port under the top cap. A quarter turn counter-clockwise will release the top cap. The underside of the top cap has a silicone gasket that helps to prevent leaking.

The fill port itself is like some other Vaporesso fill ports that I’ve seen in the past. It has a silicone membrane with an X cut into it. You push your ejuice nozzle into the membrane, fill up your ejuice, and the membrane seals itself when you remove the nozzle. It seems to work well because I haven’t had ejuice leak from the top cap, but I have found some ejuice under there when I’ve gone to refill. 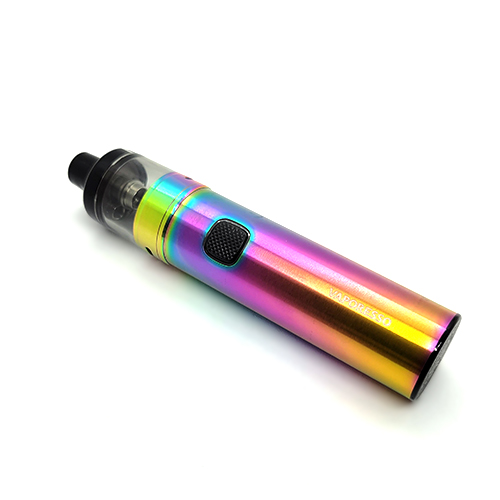 One major difference between the two GTX GO devices is the battery capacity. The GTX GO 80 has a 3000mAh battery while the GTX GO 40 packs just half that with its 1500mAh size. Another noticeable difference is charging speed — the GO 80 features 2A charging while the GO 40 is a standard 1A. They both charge through a Type-C charging port on the ‘back’ side of the devices.

Interestingly, both devices take about an hour and a half to charge. This makes sense though; the GO 40 has half the capacity and half the charging speed and charges in the same amount of time as the larger, faster charging battery.

The LEDs surrounding the fire button light up each time that you take a draw. The color that it lights up indicates your battery charge level: 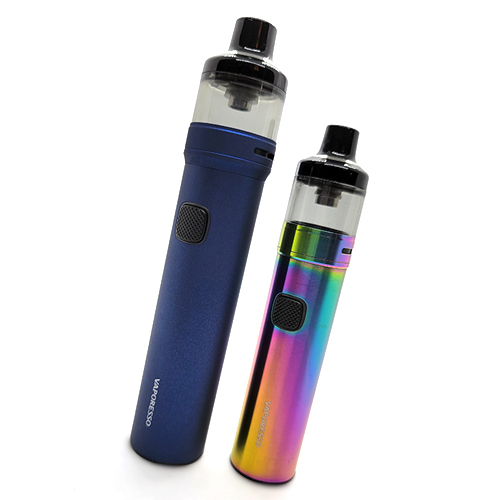 The GTX GO 80 comes with a single GTX 0.2Ω mesh coil. The coil is rated for 45-60W but, as there’s no adjustable wattage on this device, you don’t have the option to set the wattage. Since the GO 80 has a max voltage output of 4V, it will fire at 80W when fully charged and using the 0.2Ω coil. Even though this is quite a bit out of the recommended wattage range, it vapes just fine.

The vapor volume is huge and the vapor is hot but still tolerable. Flavor is good, but not nearly as good as it is in a proper tank like the GTX Tank 22 that comes with the Vaporesso Gen Nano Kit. This coil is best vaped with the airflow wide open for an unrestricted direct lung draw.

The GTX GO 40 comes with a single GTX 0.6Ω mesh coil that is rated for 20-30W. Using Ohm’s Law for a quick calculation, the GTX 40 will output 26.67W with this coil when used at a full charge. Out of the box this setup delivers a MTL draw with the airflow wide open. This can be slightly restricted to a tighter MTL draw by closing the airflow, but it’s still not a tight MTL draw.

Again, flavor is okay but nowhere near as good as it is in a dedicated sub ohm tank. In addition, the flavor is very muted with the airflow near fully closed so I tended to leave the airflow open. Not good news for tight MTL vapers.

Although the flavor from these kits is a bit disappointing, one thing they have going for them is that they stay dry and leak free. The pods are built with what Vaporesso calls “SSS Leak-Resistance Technology”, a fancy way of saying that they don’t leak. They’re right too because I haven’t had an ejuice leak out of the pods, even after letting them sit on their side overnight.

Other performance issues have been non-existent. The simplicity of these kits leaves very little that can go wrong. As long as I press the fire button and it works then these are working as they should.

Vaporesso didn’t forget the vape pen, but perhaps they should have just left it alone.

There’s honestly nothing wrong with the battery portion of the devices; they look and feel good, the buttons are solid, and the battery performance is decent. However, I feel that the flavor from the tanks is a bit of a let down.

While not bad, there’s a noticeable difference from using these coils in their dedicated sub ohm tanks. That tells me that the tanks here are the thing hindering the performance. And because the GTX GO’s don’t have a 510 connection, you’re stuck with using the GTX Pod tanks.

There is a flip side to this coin, though. These vape pens are much, much easier to use than a box mod and sub ohm tank. Remove the pod, pop in the coil, fill it up, and you’re ready to vape. No wattage to adjust and no disassembling a tank for maintenance are positives to these kits. If I was someone who wanted to make the switch to vaping, I think that these kits would be an attractive option.

My verdict? Unless this is your first, or one of your first devices, I would pass on these kits. If you do decide to pick one up, make sure to purchase an extra pack of coils too.