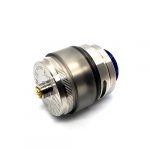 Mesh RTA’s… when I think of rebuildable devices that brought a good mesh system into the market, I automatically think of the partnership between Wotofo and the YouTube reviewer Mr Just Right1.

Don’t get me wrong, they were not the first to build a mesh deck by any means, but they were the first to do it with a level of success and in a way where people were not terrified of the dreaded mesh dry hit anymore. Their idea was simple and executed flawlessly, and so the incredibly popular Profile RDA was born.

Since then there have been a few incarnations; there was the Profile Unity RTA, the Profile RDTA and follow up RDA’s. Today we are taking a look at the new Profile M RTA. How does it fair in a market now saturated with mesh? Let’s see… 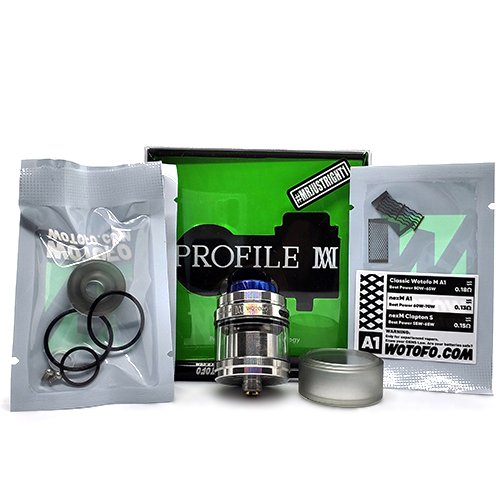 No beating around the bush here, I love the look of this RTA. It’s small which is great! So many RTA’s are really tall so it’s actually nice to review one that’s short and aesthetically pleasing. My review unit is stainless steel which I was over the moon with. Wotofo’s website shows Black; Stainless; Gunmetal; Gold; Rainbow; Blue as available colours.

Going from the top to the bottom we have a shorty, resin 810 drip tip but all of your regular 810’s will also fit. I like the shorty style tips so this was perfect for me.

The top cap is a slide to fill mechanism. Those of you that have seen my previous review of the Dead Rabbit V2 RTA will know that I’m just not a fan of this. Yes, it’s convenient to a degree, but I always end up with seeping juice and they nearly always end up loose over time.

The tolerances are actually really nice on the M. There is a grommet in the fill port that you push your bottle through and this combats leaking and is nice. But only time will tell if the slide holds up. The whole system unscrews for cleaning which is definitely a pro.

The airflow ring is next. The Profile M is a top airflow RTA which I have no problem with and it certainly helps when newer people are getting into rebuildables as wicking is much more forgiving in a top airflow configuration. There are stoppers on the airflow adjustment. It’s smooth to operate and there’s a rather nice Profile M engraved logo which is nicely placed and not offensive at all. There is tons of airflow on the M, don’t be mistaken by it’s size, but we will talk more about this later.

You get a straight glass and a plastic or PCTG bubble variant which holds 3.1ml and 4ml respectively. I personally would have liked to have the bubble be actual glass but you can’t win them all I guess.

The deck section has some nice knurling around it: not only does this look good but it makes removing the deck a breeze. The deck is the same familiar layout as the RDA. Underneath where your mesh and wicks sit, there is a sprung loaded insulator that keeps your wick pressed up against the cotton. Many other mesh devices have since copied this design but this alone was the main reason for the Profile’s huge success — finally there was a method for installing mesh coils in a rebuildable that worked.

Lastly, the 510 pin is protruding more than enough for the M to sit on a hybrid mod if you so wish but please, just make sure you know your Ohm’s law before doing this — safety first at all times.

The build quality overall feels very nice indeed. I’ve had no issues with crunchy threads or dodgy O rings and the M sits very nicely even on taller mods due to the shortness.

How to Build on the Profile M RTA

If you are familiar with building on a previous Profile atty then you are going to be really comfortable building on this because it’s pretty much the same as the RDA deck. In the box you get a tool in order to roll your mesh strips to the correct shape. Be sure not to crease or bend them with angles as this will create hotspots. The Clapton Mesh in particular is fairly fragile when rolling and wicking so go easy on it.

Slotting your mesh into the deck couldn’t be easier. Just sit either side inside the clamps and tighten down… it’s that simple! If you are using a build tab or you are building on a regulated device (please do not build on a mechanical device) set the wattage low and give a couple of quick pulses. You don’t have to ‘bed’ the coils in as such, but pulsing quickly can get rid of any residual oil on the coils from production.

If this is your first time building mesh I highly recommend watching a tutorial video just to make certain you are doing it right. Now don’t get me wrong, it’s an easy build but getting it wrong with mesh is much less forgiving than ordinary coils. One thing to bear in mind when tightening the clamps is to ensure that your mesh is level; you don’t want one side to be higher than the other because this will cause all sorts of issues when it comes to wicking.

Wicking on the M is also fairly easy for experienced mesh builders and for newcomers but again I would suggest a tutorial video just for some extra confidence.

Mesh requires a much thicker wick than a standard coil. Use the wick provided and slowly press down on the center spring section as you feed the wick through. You want to have the wick tight to the coil but not overly stuffed either. When it comes to trimming the wick, go with the outer edge of the RTA for reference and then trim diagonally across the tops to lose some of the thickness. Ideally, you want it to resemble a pyramid shape of sorts.

Once it’s all trimmed, place the cotton into the wicking ports but don’t stuff it in. The M is more forgiving than other mesh RTA’s due to the fact that it’s top airflow, but you don’t want to flood the deck so take your time. It’s now just a case of grabbing your juice and getting that coil and wick nice and saturated. This will take a fair bit of juice but that’s to be expected given the thickness of your wick.

I used all three mesh wires that the M has bundled with it. I found that the Clapton Mesh was the best in terms of bedding and in flavour. It took no time at all and I was happily running it at around 66watts; no dry hits, lovely warmth, and saturation with good cloud production too.

The other bundled mesh coils worked just fine too. The classic Wotofo mesh at 0.18 was just too cool for me and the nexMESH at 0.13 was warmer but I just found more flavour and better ramp up from the Clapton mesh. It’s nice that three are provided though so well done Wotofo, this is getting a pro from me!

I also installed a regular coil just for comparison which also works really well! Not the intended use of course but as a standard single coil RTA, it also punches well above average. 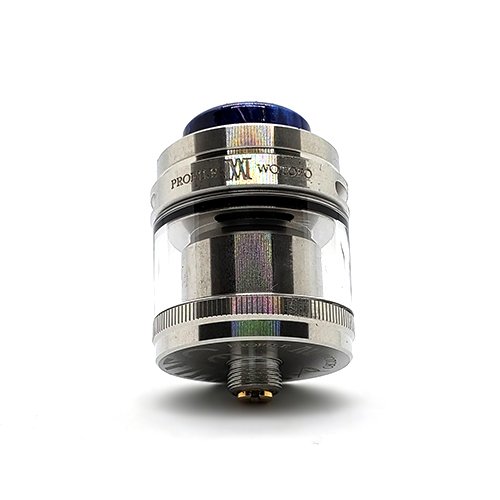 Here is my favourite part about the Profile M; the performance for a mesh RTA is outstanding! Now, if you managed to catch my review of the Zeus X Mesh RTA you will already know that actually, mesh is not my favourite way to vape. I always find that a mesh vape is much cooler than a regular coil deck and I just don’t get that warm saturated feel. Well… I have to admit that the Profile M has blown me away!

The flavour is easily the best I’ve had from a top airflow mesh RTA and it’s so smooth! No turbulence, no sharpness, and my vape always felt saturated enough that I wasn’t terrified of a dry hit. One caveat to this is that I still feel the vape is cool but rather cleverly Wotofo has provided a lot of airflow and when I say a lot, I mean A LOT!

The benefit to this is that by cutting the airflow down (mine was around 3/4 closed) you can achieve a nice warmth from the vape. Of course, if a restricted DTL vape is not your thing then this may not be a solution, and of course if you like a cooler vape as some people do then it’s going to shine wide open. I like a restricted vape so this was perfect for me. No real surprise that the M is a little on the louder side. Again, you are always going to get this with a top airflow system but this is by no means a con for me.

When it comes to the slide to fill mechanism, I did find that I was getting some seeping from it. The rubber flange filling is good but it was still a little messier than I’d have liked. Needless to say, overall I was thoroughly impressed with the Profile M before but after the performance I’m kind of loving it!

If mesh is your thing then the Profile M will definitely not disappoint! It’s a good solid RTA with flavour by the bucketload, lovely aesthetics, and solid performance. That’s not to say it’s without the odd flaw but this is very much a case of the pro’s being way better than the con’s. I have thoroughly enjoyed testing the Profile M and if I were in the market for a mesh RTA I would without a doubt choose this over anything else available.

Really good job from Wotofo and Mr Just Right1 — you nailed it!