Wotofo Recurve V2 RDA Review: Two Excellent RDAs for the Price of One 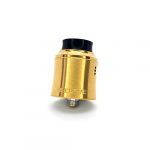 When you pair Mike Vapes knowledge of what vapers are looking for, with the build quality and manufacturing capabilities of a company like Wotofo, what do you get? You get the Recurve V2 RDA.

The Wotofo Recurve V2 is the successor to both the Recurve RDA and Recurve Dual RDA. How? Well the Recurve V2 features a four terminal, postless build deck that can accommodate either single or dual coils. It also comes with two airflow inserts; one for single coil builds and one for dual coil builds. It’s essentially two RDAs in one!

The Recurve V2 is once again a collaboration with Mike Vapes, a guy who knows his stuff when it comes to vaping. He has had a great track record with his collaborations, and the Recurve series of RDAs are particularly popular for their excellent flavor and ease of use.

Is the Wotofo Recurve V2 another great tank from Mike Vapes? Find out in this review.

This product was sent to me by Wotofo for the purpose of this review.

The Recurve V2 takes its design after the original Recurve. It has a curvy body design, although the curve is not as extreme as it was on the original. I like this subtle curve better and I think that it makes for a great looking tank.

The Recurve V2 has a 24.6mm diameter which is good for a dual coil RDA. There may be a touch of overhang if used on a smaller single battery mod like the Aegis M100 but it should sit flush on most dual battery mods.

I’m using the gold color for my test unit but it’s also available in black, stainless steel, gunmetal, blue, and rainbow. All of the color options look good and I wouldn’t mind getting my hands on the blue one.

The top cap and drip tip are curved just like the body to really put the “curve” in Recurve. The drip tip is an 810 size and removable but I had no issue using it. The curve makes it a pleasure to use and it’s all around a nice drip tip.

RECURVE is engraved on the body near the bottom of the tank and there is no other branding or styling present. The curves are the main design aspect and while they are subtle, they succeed in taking the Recurve V2 from plain to a good looking tank. 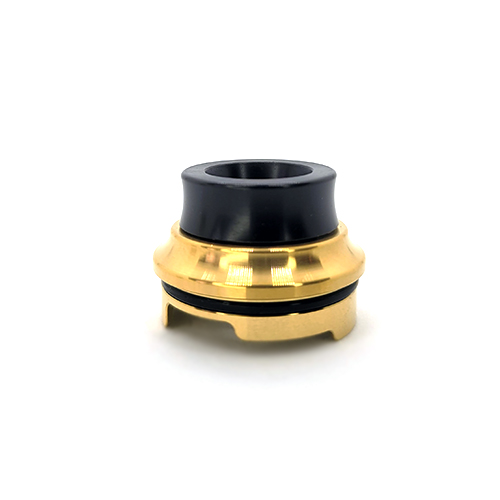 The top cap and body cap are both removable from the build deck. The body cap locks onto the deck through two small grooves so it does not freely rotate. However, there is some play to the body cap and it wiggles back and forth a bit which can be annoying.

Another minor con is the o-rings. Once they are lubed up with a little bit of ejuice the top cap and body cap both come off extremely easily. Just a small tug is all it takes to get them off. It’s much easier than I would like. Of course, this makes adjusting the airflow very smooth and easy, but more resistance would still be acceptable and welcomed for sure.

There are three rows of wide airflow slots on each side of the tank and you get two airflow inserts in the box. These airflow inserts each have three rows of 5 airflow holes but they differ in the amount of space that they leave on the build deck. One insert is for single coil builds and leaves less space on the deck, while the other insert is wider and meant for dual coil builds.

The insert fits right onto the build deck and sits over and around the coil(s).

This airflow setup is certainly innovative of Wotofo and Mike Vapes. While most dual coil tanks will only perform their best with dual coil builds due to the large deck size, these inserts instantly restrict the deck space for single coil builds and that’s very cool.

My issue is that the insert makes it difficult to see your cotton. Yes, you can remove the insert to see if your cotton is saturated, but the inserts pick up and hold a lot of ejuice so this can get messy. When squonking this isn’t as much of an issue because the deep juice well allows you to squonk without worry, but when dripping I found it frustrating.

The deck has a brushed finish and is concave to allows ejuice to more easily saturate your wicks. It has quite a deep juice that will hold 2ml of eliquid which is a big plus. You can really drip or squonk this thing like crazy and you won’t have any issues with flooding or leaking.

Because this is a postless deck you have to precut your coil legs before installing them. I cut my leads to 7mm for both the dual and single coil builds and the coils sit a little high, but I would rather it this way than them being too close to the deck. If you cut the leads too short then the coil will be sitting in a puddle of ejuice due to the concave deck and you’ll get spitback. Cutting them to 7mm means that the coils get close to the airflow inserts, but as long as they aren’t touching it is perfectly fine. 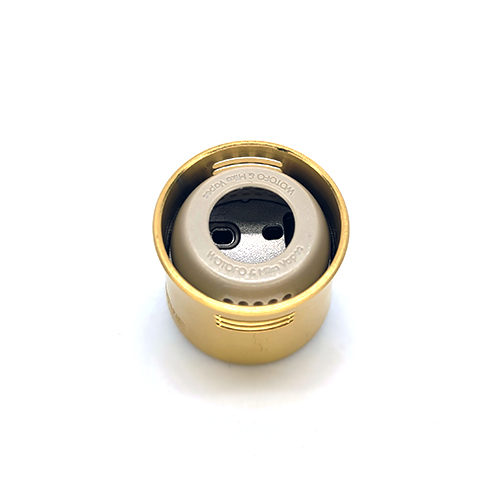 The size mounted screws secure the coils nicely in place. You will want to center your coil/coils as much as possible without them touching for maximum performance and flavor. Once they are installed, you should dry fire your coil(s) to eliminate any hot spots. Fire the coils at a low wattage (~20W) and strum them with a set of ceramic tweezers until they are burning evenly. Let the coils cool down and you’re ready to wick.

I pulled my wicks over the edge of the deck and cut them just above the lower most o-ring. I then combed them out a bit and stuffed them neatly into the wicking ports on the sides of the deck.

You can use the Recurve V2 with a squonk mod by simply switching out the 510 pin. It’s an easy process that takes only minutes to swap. 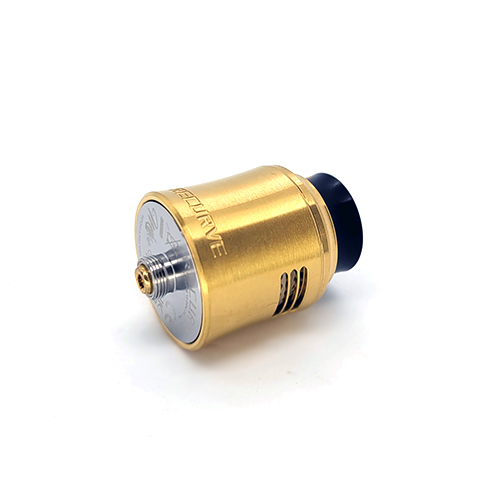 The airflow is slightly more restricted with single coil builds due to the smaller airflow insert, but only slightly. I liked closing off the tip row of airflow holes for both single and dual coil builds because it gives a tighter draw without being too restrictive. Of course, you can play around and find what you like the most.

Compared to the original Recurve and Recurve Dual, I think that the Recurve V2 is more flavorful than the original and just as flavorful as the Dual. It’s a top flavor RDA for sure.

Thanks to the deep juice well I did not have any issues with leaking. The Recurve V2 works well as a dripper, but it really shines as a squonk RDA. The juice well gives you liberty to squonk a lot before you’ll have any issues. As long as you’re vaping a lot as you’re squonking, you won’t have flooding, gurgling, or leaking.

I like what Wotofo and Mike Vapes have done with the Recurve V2. It’s an innovative tank that delivers equally impressive flavor no matter if you use single or dual coil builds. There are a lot of pros to this tank: the concave build deck, the deep juice wells, the airflow inserts to concentrate flavor, the nice design, and the nice range of airflow adjustment.

There are some cons too, but none that would make me pass on this tank. If you have the original Recurve, the Recurve V2 is definitely an upgrade. However, if you have the Recurve Dual then the decision to upgrade becomes a little less clear cut. The flavor is just as good, so if that’s the only reason you’re looking at this tank it may not be worth the upgrade.

If you like the idea of having a single, very flavorful tank that can do both single and dual coil builds, I can highly recommend picking up the Recurve V2.