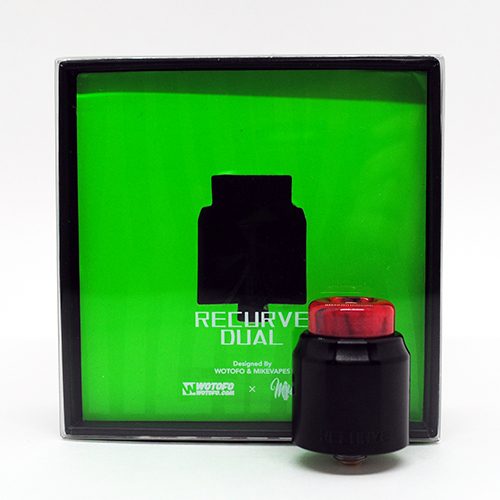 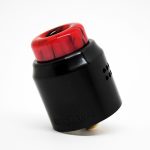 Like the Wotofo Recurve, the Recurve dual is another project with Mike Vapes. And if you were a fan of the Recurve RDA then you’re in for a treat.

I’ve been using this tank for a few weeks and it’s quickly grown to become one of my favorite RDAs. Put simply, Wotofo took everything that was good about the Recurve and made it even better. In addition, they also improved the features that weren’t so great like the small build deck and terrible screws.

The Recurve Dual has got ample building space for two coils and good quality screws to secure them in. Plus, the build deck is deep enough to allow ample squonking or dripping without having to worry about leaking. This item was sent to us for review, directly from Wotofo. 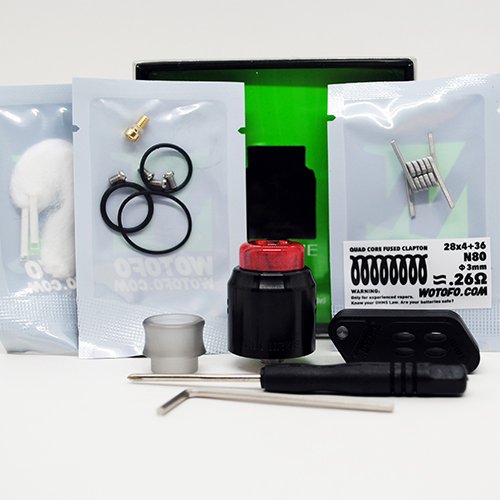 Wotofo have included a bunch of extras with the Recurve Dual (other companies, take note!). You get everything you need to build and start vaping, right out of the box. The two included coils are 0.26ohm each so the deck should come out to around 0.13ohm with both of these coils installed. You also get two pieces of agleted cotton.

Most interestingly though, you get a coil measuring tool that separates like a fan of cards. One portion is 4mm while the other six are 1mm each. The manual says to trim your coils down to a 7mm leg length for optimal performance so this is going to come in handy for sure.

From the outside the Recurve Dual looks pretty different from the original Recurve. It doesn’t have a curved mid-cap and instead sports a straight body with a slight curve just below the drip tip. The only outward similarity to the original Recurve is that there’s no top cap; the Recurve Dual consists of just a drip tip, a mid cap and the build deck.

The Recurve Dual is 24mm wide and just 34mm tall from pin to drip tip. This makes it quite the short RDA which makes it look really good on top of nearly any mod. This short stature also helps to concentrate the flavor. The inside of the mid-cap is domed to help better concentrate the flavor as well. Recurve is etched in a small, neat looking font on one side of the mid cap.

This RDA comes with two drip tips. One is a short, thick and wide bore 810. It’s made of resin and is completely rounded making for one of the nicest drip tips that I’ve ever seen or used. I don’t think I’ve ever liked a drip tip as much as I like this one. While most drip tips are super thin and have sharp edges, this one is smooth and chunky. Once you see it and use it you’ll know exactly what I’m talking about.

The second drip tip is almost identical to the one from the original Recurve. It’s got a curve in the middle and sits just a bit taller than the first. This drip tip is nice but I definitely prefer the resin.

You can restrict the airflow holes down two at a time but I found that the draw was just right with all holes open and fully aligned. There’s still a bit of resistance when you draw and it’s not too airy at all. With the airflow holes closed I found it to be a little too restricted and it also made the vapor much too hot.

You also have the option of twisting the mid-cap fully counterclockwise to hit your cotton and coils from the side. This gives the most airy draw possible off the Recurve Dual but I didn’t find this configuration to be that great. Because the airflow is no longer funneling straight to the coil the flavor gets taken down a couple of notches.

Honestly, if the airflow was non-adjustable and only lined up with the holes on the build deck it would have been perfectly fine by me. To me, that’s the only way to use this RDA.

My only complaint with the design is replacing the cap back onto the Recurve when you take it off. It just seems like it never fits on properly and you have to wiggle it and twist it until it finally seats back down around the outer o-rings. I don’t think I’ve ever gotten it back on without at least a little bit of a struggle.

This build deck will look very familiar if you’ve used the single coil Recurve before. It’s basically the same, half-pipe shaped build deck. Only this time around it’s not as crammed and there’s more than enough space to comfortably fit two coils.

The deck is a postless build deck that is flanked on either side by two large, curved walls. As I mentioned earlier, these walls have six holes cut into them that align perfectly with the airflow. If you install your coils right they’ll get hit directly by the airflow. Just by looking at this build deck you can tell that this is a great flavor RDA.

There are four terminals, two on each side of the build deck. Your coils are secured by small but good quality Phillips head screws that I had no issues with. Thankfully, these screws are much better than the single coil Recurve and they’re easy to remove and secure.

The build deck on the Recurve dual is raised with channels that drop down on either side for you to feed your cotton. These channels lead down to the base of the build deck while your coils remain raised. This makes for a massive juice well at 8mm deep and results in leak-free, flood-free squonking. When you squonk, the ejuice gets distributed through a central channel and straight to your cotton while any excess ejuice gets drained back into your bottle.

Building on the Recurve Dual is really easy. First, you’ll want to measure out your coils using the included coil measuring block. The manual says to cut your legs to 7mm for the best positioning and performance and this is exactly what I did. I trimmed the included coils down and then loosened the four screws. The terminals hold your coils upright once you push them in and this made it easy to secure them down.

Once the coils were in I performed a couple of dry burns to get the coils heating evenly. Once they cooled down, I wicked them with the included cotton. I trimmed the cotton down to just touch the base of the build deck and then stuffed my wicks into the side channels. Next, I juiced it up and I was ready to get dripping.

I say ready to get dripping because the Recurve Dual doesn’t come with the squonk pin installed. So if you want to start squonking you’ll just have to replace the solid 510 with the bottom feeding 510 in the spare parts bag. 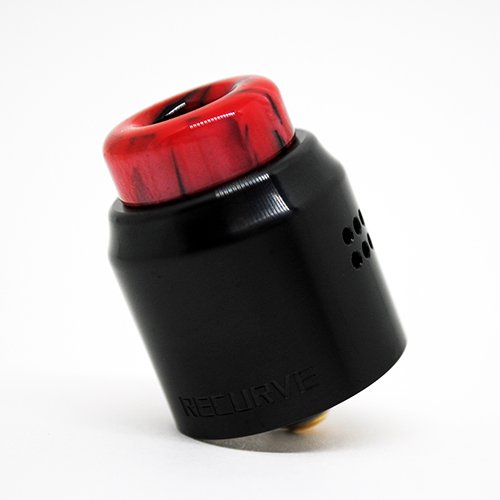 I always vaped this RDA with all six airflow holes lined up with the holes in the build-deck walls. This made for the best airflow as it’s still somewhat restricted and not too airy. This also allowed the airflow to directly hit the bottom and sides of the coil which resulted in the best experience. Any other configuration seriously muted the flavor and made it a much less enjoyable vape.

Flavor-wise, this RDA is pretty good. Speaking specifically about the included coils, I was vaping this setup anywhere from 70-90W and getting warm and dense vapor. There was no spitback or popping with these coils and it vaped very smoothly. The taste was good but it was definitely less flavorful than the Drop Dead RDA (currently the best flavor RDA).

The alien coils and staple claptons both performed similarly and I got much better flavor than when using the included coils. I vaped these coils anywhere from 55-70W and the flavor was great. There isn’t really anywhere for the airflow to move that isn’t around the coils and this definitely plays a part in enhancing the flavor.

The Recurve Dual does make a little bit of noise when vaping but there’s no whistling; it’s just the sound of the air being pulled through the six small holes and being directed to the coils.

I dripped without a problem and never had any leaking from the airflow holes. However, squonking is where it’s really at with this RDA. Because of the channels in the build deck that lead right to your wicks, it’s a nearly flawless design. You can give your squonk bottles a good squeeze and there are no negative repercussions. The wicks saturate and any excess ejuice gets drained back into the bottle. The Recurve Dual is for sure one of the best squonking RDAs I’ve used to date. 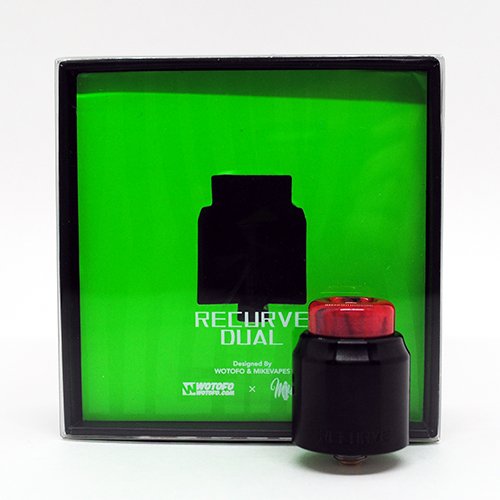 Wotofo have been making some great rebuildables lately and the Recurve Dual is no exception. While it isn’t the absolute best flavor RDA out there right now it certainly ranks up there as one of the better ones. The build deck is extremely easy to use and it’s absolutely leak-free. Dripping is great with this RDA but squonking is where it really shines.

You get everything you need in the box to build and start vaping right away and this makes it a great choice if you’re looking for your first RDA. If you liked the original Recurve, you’re going to like using this one.

What do you think about the Recurve Dual? Let me know down below!