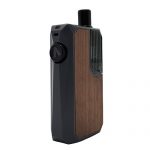 The Narada Pro is a small and portable pod vape just released by Augvape. It’s made in collaboration with Vaperizzo, a U.K based vape shop that I had never heard of before now, but apparently they’re quite big overseas.

The Narada Pro is the upgrade to the Narada pod vape that was released earlier this year, with the biggest changes being the addition of a small screen and adjustable wattage up to 30W. It also has adjustable airflow control, Type-C charging, and a 3.7ml e-liquid capacity.

It comes with two coils inside the box but I was also sent the RBA coil to test out. Is the Narada Pro worth picking up? Or if you have the original Narada, is it worth upgrading for? Read on to find out! 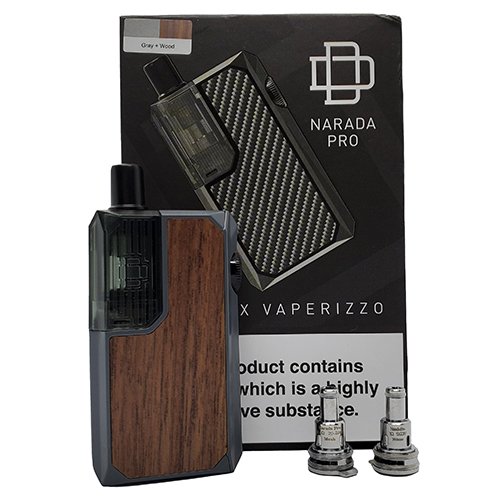 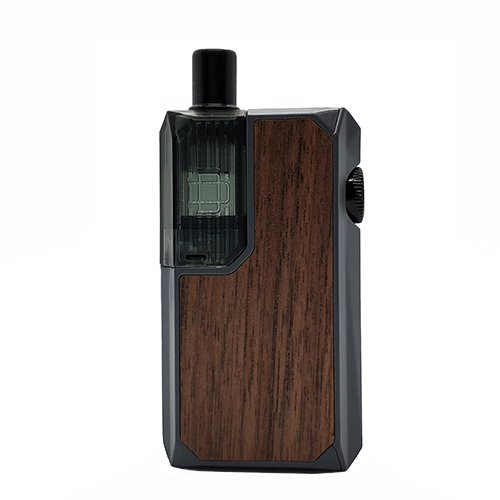 Compared to the original Narada, the Narada Pro looks radically different. This looks and feels like an entirely new device rather than just an upgrade.

You can get the Narada Pro in one of three color options. The “Wood” test unit that I received is, in my opinion, the least attractive of the bunch. The zinc alloy frame is finished in a light grey paint that doesn’t go too well with the wood; a black or dark grey frame would have looked much better. The panel also isn’t real wood but the sticker looks convincing enough.

The other two color options look much nicer. If you’re into carbon fiber then the carbon fiber panel with black frame is right up your alley. For something classy with more color, the Black Leather Narada Pro with its red frame is really nice. It might even be the nicest of the three.

The size of the Narada Pro is more or less the same as the original so it’s still a small and pocket-friendly device. The flat shape also makes it easier to slip into a pocket without sticking out. It weighs 129g so it’s not feather light but it’s not going to weigh you down either. While it doesn’t come with a lanyard, there is an anchor spot for one just above the fire button. 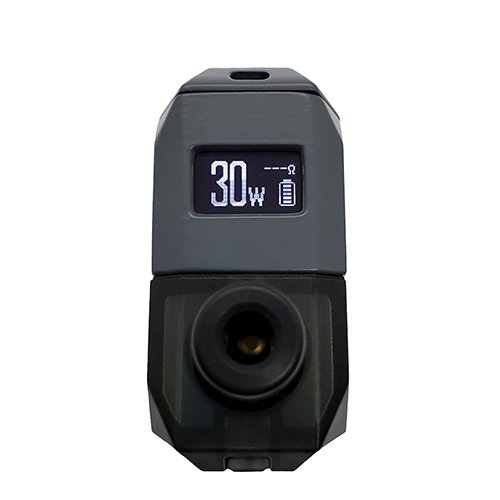 The Narada Pro has a tiny but bright OLED screen on the top of the device. For being so small it’s still extremely crisp and clear. It displays wattage that changes to puf time when you take a draw, coil resistance, and a battery life indicator. That’s all you really need on a screen so I have no complaints.

The pod is made out of PCTG. It  slides into the Narada Pro from the side and clips into place. There are no magnets but the clip holds the pod securely in place with no wiggle whatsoever. The pod is side filled and holds up to 3.7ml of ejuice; almost a full ml more than the original Narada. This can definitely get you through a day of vaping on one fill, especially if you vape nicotine salts.

On the outer side of the pod is an airflow adjustment knob. This knob slides up or down to change the airflow but I’ll get into this more later on. The dark tint on the pod makes it hard to see into but holding it up to a light source solves this problem. A nice touch is the Druga logo on the front of the pod. It’s subtle but looks great.

A nice feature of the Narada Pro is that it uses a 510 drip tip. It only comes with one in the package, but if you have other vapes then you likely have a couple you can swap in.

How to Use the Narada Pro 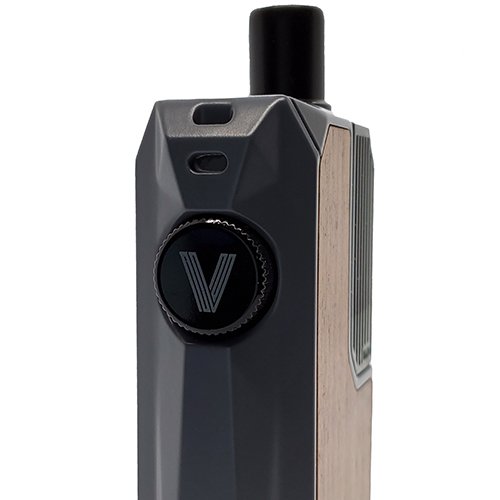 The Narada Pro ships with only wattage mode but the firmware can be upgraded to add Temperature Control and Variable Voltage modes, too. The downside to this upgrade is that this removes the option of locking the fire button. If you’re a temperature control vaper and you’re planning on picking up the RBA, then this is probably something you’ll want to do. But with how easily the fire button spins, I’m not sure that locking the fire button is an option that I want to give up.

For ease of reference, here are all the Narada Pro button combinations:

Just like the original Narada, there’s an RBA coil available for the Narada Pro (sold separately). This RBA coil is slightly bigger than the original, and as a result, the two aren’t backwards compatible. It’s a small two-post build deck, with one post on each side of the deck, so your coil legs will have to be facing opposite directions to fit.

This deck is tiny so it can be a bit difficult to build on, but I found it to be easier to build on than other similarly sized decks. A 2.5mm ID coil or under will fit on this deck and there’s only enough space for simple round wire builds with a few wraps. The post screws are tiny Philips head screws and they grip and secure the wire well.

Building on this deck takes some precision but it’s pretty straightforward. After securing your coil you’ll want to ensure that you cut your leads so that they’re flush with the deck.

Dry firing to check for hotspots is important and Augvape includes a plastic RBA base in the RBA package for just this purpose. You can insert the RBA coil into the base and then the base slides into the Narada Pro just like a pod would. 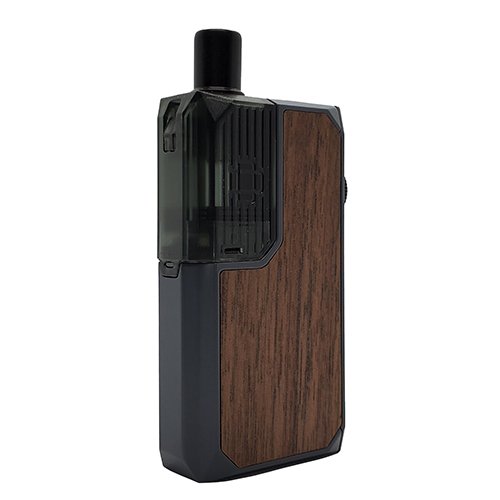 The airflow control on the Narada Pro does change the draw, but the switch doesn’t have a lot of room to travel. As it is, there isn’t a huge change between open and closed. Making the switch travel farther would allow more air to make its way into the pod for a more open DL draw. As for MTL, I’m not sure how the draw could be made tighter but it’s something I would have liked for the 1.0ohm coil.

The 1.0ohm coil is meant for MTL vaping and it is certainly a MTL coil, but it’s a loose MTL draw that is not nearly as tight as I would prefer it to be, even with the airflow closed. Tight MTL vapers will likely be unhappy with the draw, but it’s a pleasant vape if you like a loose MTL vape. 17W is where I prefer using this coil for warm vapor and good flavor. 50/50 and even 60VG ejuices wicked well, but 70VG and higher felt like the coil was struggling. With the airflow closed and a 35mg nicotine salt at 17W, this coil gives a nice throat hit.

The 0.4ohm coil is a mesh coil made for DTL vaping. It’s a restricted DL vape with the airflow open and more of a very loose MTL draw with the airflow closed. It’s a warm-nearing-cool vape at 25W and the flavor is good with smooth vapor. Unlike the 1.0ohm coil, this coil handles even 70VG really well and without any issues. Lower strength regular nicotine ejuices and nicotine salts vape well with this coil. Even though I usually prefer a tight MTL vape, this coil is definitely the winner out of the two.

As for general issues and leaking, I don’t have anything to complain about. The Narada Pro has been completely leak free and I haven’t even had any condensation build up. It’s been smooth vaping the entire time I’ve used this device with not even so much as a hiccup. 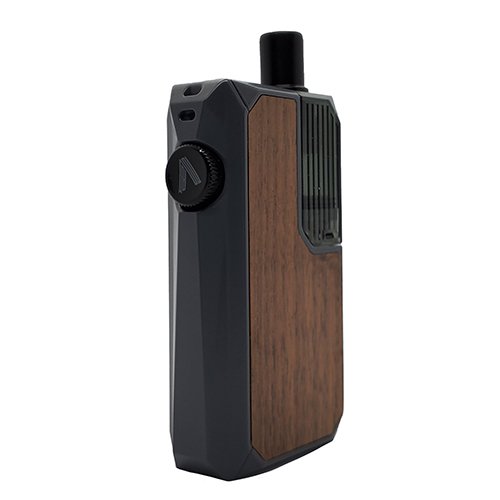 The Narada Pro packs a 950mAh battery which is good for its small size, but a downgrade from the 1100mAh battery on the original. Even with the reduced capacity, the low wattage requirements of the included coils made for a decent amount of vaping on a single charge. Both coils allowed me to vape at least a full pod on a single charge, although the 0.4ohm coil had to be refilled shortly after charging. Still, that’s a decent amount of vaping and, depending on how much you vape, enough battery life to last most vapers through the day without having to refill.

A nice addition to the Narada Pro is Type-C charging. It charges through a port located on the bottom of the device. It takes approximately 25 minutes to charge the Narada Pro up to 80% which is blazingly fast. However, a full charge takes just about an hour. I can’t complain though; if you’re crunched for time, charging up to 80% in 25 minutes is a life saver.

Overall, the Narada Pro is a solid DL device. It has its uses for loose MTL vaping but DL vapers will get the most out of it. The design and build quality are solid, the flavor and performance are on point, and the battery life is great. The RBA is also a solid option for hobbyists who want to build their own coils. If you’re a vaper looking for a compact DL device, the Narada Pro is a great choice.