If you’re into cannabinoids then you’ve no doubt heard of Delta 8. Delta 8 THC is similar to Delta 9 THC (the component in marijuana that gets you high) and it will make you feel euphoric, clear headed and relaxed.

Unlike CBD, Delta 8 will get you high but the effects are smoother and less intense than those of Delta 9 THC.

In addition to providing a more mellow and relaxing experience, delta 8 products are also more attractive than their delta 9 counterparts for one main reason; lab testing. All of the products on our list have certified lab tests which will allow you to verify exactly what is in each one.

We’ve tested dozens of products to put together this list of the best delta 8 disposable vape pens 2022. These products have been selected based on their potency, quality, lab test results, and consumer feedback. If you’re unsure about which one to pick, we’ve included some helpful information at the end of this list.

How we chose these Delta-8 vape pens

We chose these products based on a number of factors, but prioritized our selection process according to safety, quality, transparency, and potency. Each product in this buying guide:

When selecting the products for this buying guide, we also considered the following factors:

10X offers excellent Delta 8 vape pens that come ready to go out of the box. Each one comes prefilled with 900mg of delta 8 pure, all-natural delta-8 THC and delicious tasting terpenes.They carry a large selection of flavors, with a total of 11 strains to choose from, including sativa, indica, and hybrid options. 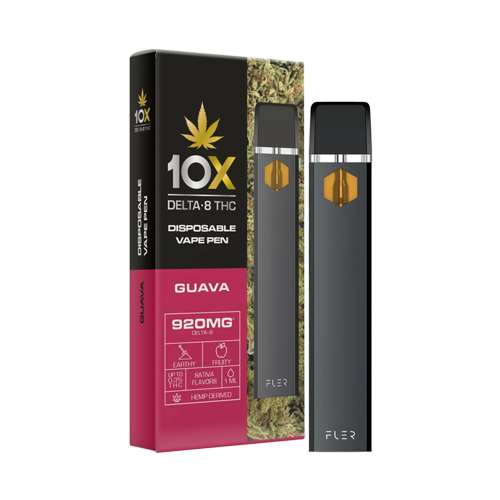 10X’ Delta 8 disposables are sleek, super portable, and potent. Each one contains 900mg of pure, all-natural, hemp-derived Delta-8 THC and natural terpenes. You’ll intake approximately 3.75mg of delta 8 per puff, and get approximately 240 puffs from these D8 vapes before they’re finished.

Lab results show ~90% Delta 8, and negligible levels of other cannabinoids, so the quality and potency are there. These delta 8 vapes are lab tested and approved for safety and guaranteed to be pure, unadulterated, and contain no synthetics. 10X’ vapes contain no Vitamin E Acetate whatsoever.

They offer a pretty large selection of flavors with a total of 11 strains available, and there are sativa, indica, and hybrid options to choose from. You’ll find popular strains like Skywalker OG, Mango Kush, Pineapple Express, Sour Diesel, and more.

Lab test results are available on the product page. 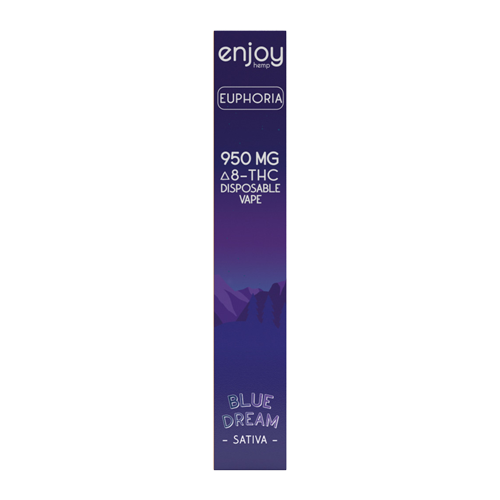 Enjoy Hemp offers extremely potent, high-quality delta 8 disposables. Their D8 vape pens come prefilled with 950mg of pure delta 8 THC and contain more than 96% pure delta 8. The remaining 4% is made up of small quantities of other cannabinoids. Their D8 disposables are free of pesticides and solvents, as per their lab reports, and also contain no fillers — no VG, PG, or Vitamin E Acetate.

Enjoy Hemp carries 6 different strains; 1 hybrid strain, 2 indica strains, and 3 sativa strains. This is much more variety than a lot of other D8 disposable brands, so you have more options to get exactly what you want. Each one will deliver a smooth and consistent draw with effects that you will really feel. Lemon Kush was our favorite though; it’s a true Lemon Kush flavor that tastes authentic and natural.

Due to the high D8 content, these vape pens are highly potent, so proceed with caution! However, if that’s what you’re after, then you’ll be more than satisfied with these disposables.

Get 15% off your entire order
USE CODE “VERSED” 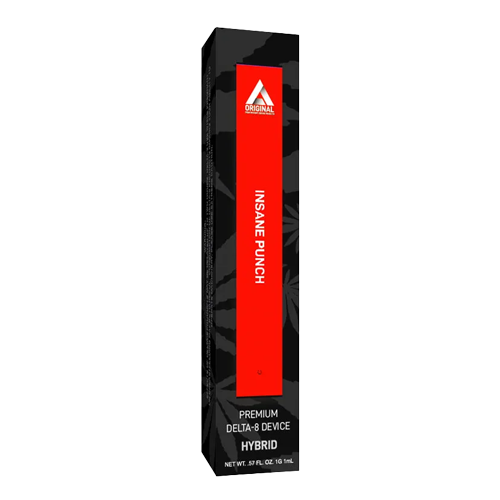 PROS
Rechargeable
100% hemp-derived
Lab tested for purity and potency; lab test results are available on the product page.
All of their strains are very tasty
Naturally flavored by terpenes

Delta Extrax make D8 disposable vapes that are just as good as their cartridges — only more convenient. Each one comes prefilled with 1ml of delta 8 distillate and numerous delicious terpenes. What’s great about these disposables is that they pack a 280mAh rechargeable battery so you can vape every last bit of D8 out of them without having to worry about the battery dying on you. 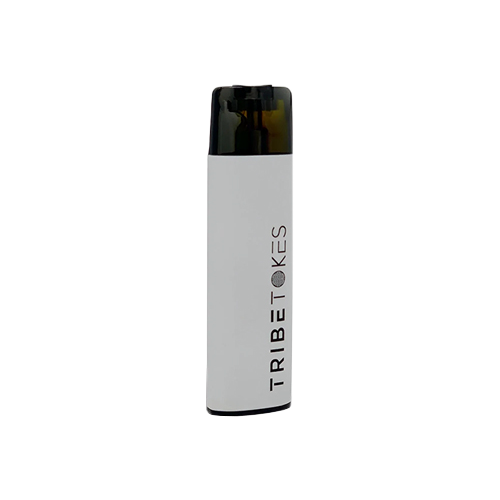 Tribe Tokes delta 8 disposable vape pens are just like their carts except they don’t require a battery. They come with a built-in 370mAh battery and come ready to go straight out of the box — just draw on the mouthpiece to vape.

They offer pure, full spectrum Delta 8 vape pens that are naturally flavored by terpenes. Their vape pens come prefilled with a half gram of hemp derived delta 8 distillate, as well as small amounts of CBD, CBG, CBN, and CBG so you get the full “entourage effect” of other cannabinoids too.

Their vape pens contain no MCT, PG, PEG, VG, or Vitamin E Acetate and all of their disposables are manufactured right in the U.S.A in California.

Tribe Tokes products contain no mycotoxins, no pesticides, and no foreign materials. Their lab test results let you see for yourself the exact quantity of CBD, Delta 8, CBG, and other cannabinoids, as well as the exact quantities of the various terpenes that characterize each strain. 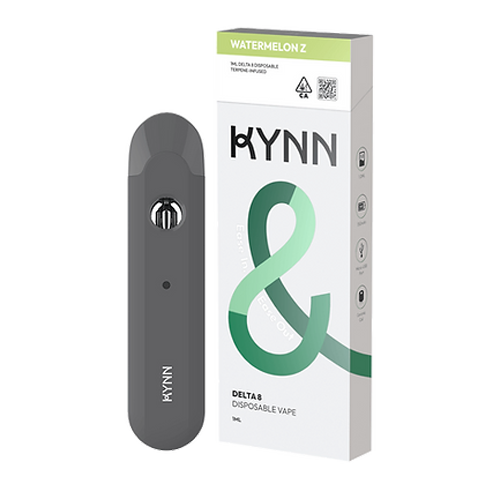 CONS
Flavors not printed on device; makes it hard to tell them apart
Uses micro-USB charging

KYNN is a newer brand on the market, with their focus being on delta 8 disposables. KYNN hits the ground running with a quality D8 product that, with just a few puffs, will decompress the stress of a busy day and provide the full effects of delta 8.

Each KYNN disposable comes with 1 ml of pure delta 8 and contains no other cannabinoids, allowing you to experience the pure and relaxing effects of delta 8. They contain around 85% delta 8 and the strains vary between sativa, indica, or hybrid. They are rechargeable by micro-USB and each one lasts for approximately 400 puffs.

What is Delta 8 THC?

Delta 8 is very similar to Delta 9 and binds to the same cannabinoid receptors in the brain. It produces many of the same effects like appetite-stimulation, reduction of nausea, reduction of anxiety, and pain relief.

However, while it provides a lot of the same benefits, Delta 8 is said to produce less intense psychotropic effects. In simple terms, this means that Delta 8 will produce a less intense high that is reported as being more subtle, smooth, and calming than Delta 9. Delta 8 is something like a “THC lite”.

While Delta 8 is only now seeing mainstream use, it’s not new by any means. We’ve known about Delta 8 for a while, but due to changing hemp regulations it’s only now begun to be more heavily researched and used.

The Difference Between Delta 8 THC and Delta 9 THC

While Delta 8 and Delta 9 THC are close cousins and can be very similar, there are some key differences between them. Generally, Delta 8 is a more subtle version of Delta 9.

This means that Delta 8, as long as it’s derived from hemp and complies with the Delta-9 THC limit, is federally legal everywhere that CBD is. It’s a little bit of a “legal loophole” that could be closed at any time. Lawmakers are very aware of Delta 8 so it’s uncertain how long it will remain legal.

What is a Delta 8 Vape Pen?

Delta 8 disposables are a lot like traditional nicotine disposable vapes only instead of containing ejuice, they contain delta 8 distillate.

You’ll find that most delta 8 vape pens are small, slim, portable, and discreet. Despite being called a “pen”, they usually have a thin rectangular shape. You might still see some that have a slim cylindrical shape that does indeed look like a pen, but this is less common to see.

Each pen is made up of a battery and a pre-filled reservoir containing delta-8 distillate. Most are rechargeable and can easily be plugged in and recharged when the battery dies.

As for the reservoir, these are typically not refillable. When the distillate in the pen is done you will have to throw it away and start using another one.

A typical delta 8 pen will last for several hundred puffs before running out completely. This can mean anywhere from a few days of use to a few weeks of use, depending on how heavily you use it.

Terpenes are compounds that occur naturally in hemp and cannabis plants. Each strain contains different types and amounts of terpenes. These terpenes are what gives each strain its distinctive smell and taste and it’s these same terpenes that are used to flavor most delta 8 vape pens.

How to Use a Delta 8 Vape Pen

Delta 8 vape pens are the simplest way to use Delta 8. They come prefilled and pack a built-in battery. They’re also draw activated so all you have to do is draw on the mouthpiece to vape. D8 disposables don’t require a battery or a charger; all you need is the pen itself.

Delta 8 disposables will last for a few hundred puffs, after which they will stop working. Good vape pens, like the one on our list, will last until they’re out of Delta 8 distillate so no need to worry. Once they die, you can just dispose of them in an electronic recycling bin.

What to Look For When Buying Delta 8 Products

Not all Delta 8 products are created equal. There are some key things you should be on the lookout for when purchasing Delta 8 vape pens.

Lab reports: Because there are no regulations on Delta 8 products, third-party independent lab test results are crucial. This allows you to verify that you’re getting what you’re paying for, like D8 content. It also allows you to verify that there are no harmful additives, fillers, pesticides, solvents, or heavy metals. If you can’t find lab test results, pass on that company.

Purchase from well-known brands: This comes down to the lack of regulation and oversight in the industry. It’s better to purchase from a well-known brand that has good reviews and ratings from people in the community. A well-known, reputable company is one that is more likely to perform stringent testing on their products and have their third party lab test results readily available.

Can I Pass A Drug Test After Using Delta 8?

Quite simply put, no. Because they’re so molecularly similar, many drug tests don’t differentiate between Delta 9 THC and Delta 8 THC. This can cause you to fail a drug test. Keep this in mind if you’re subject to drug testing or if there’s a chance that you may be drug tested in the future.

Let us help you

Have a question or a comment? Need help? Even if you just want to share your love for vaping. Send us an email! We would love to hear from you. 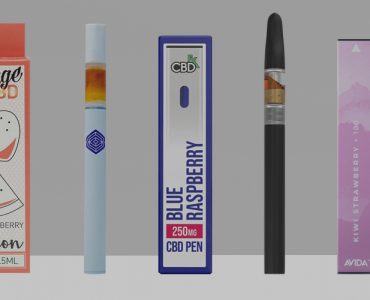 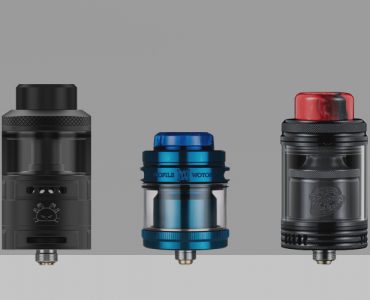 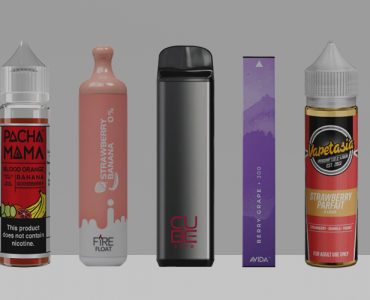