Dead Rabbit V2 RDA Review: An Upgrade Worth Getting? 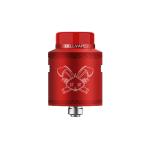 For a long time, the Dead Rabbit RDA was the best RDA you could get. But the vaping world moves fast and since its release in 2017 there have been multiple RDAs that have taken its place.

Now, just shy of three years since the release of the original, Hellvape have released one of the most anticipated follow-up RDAs ever — the Dead Rabbit V2. The Dead Rabbit V2 stays true to the design that made the original so popular in the first place but brings with it some upgrades and fine-tuning as well.

The Dead Rabbit V2 is a 24mm RDA with dual airflow slots. The airflow can be set to either open, downward angled slots or honeycomb-style airflow holes. The quad post build deck keeps the familiar bunny-ear design of the original but the posts are now angled for easier building. It also comes with an Ag+ anti-bacterial 810 drip tip. 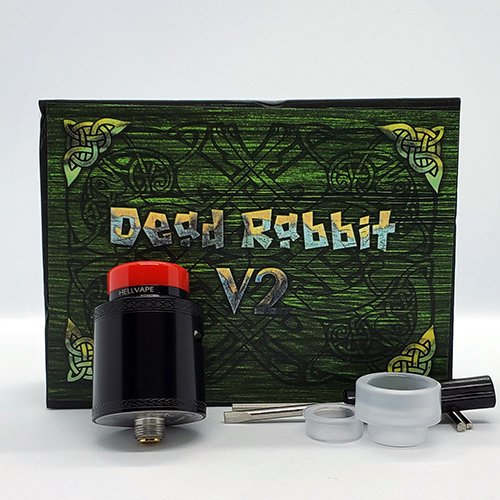 One thing you’ll notice about my Dead Rabbit V2 is that there are no logos. I checked the authentication code on Hellvape’s website and it is indeed authentic. However, new laws in Canada prohibit having characters on vaping products and the dead rabbit logo is considered a character. Everything else about the RDA remains the same as it is in the U.S.

Besides the lack of logo, the body of the Dead Rabbit V2 looks nearly identical to the original. It’s still 24mm in diameter and the height remains the same. The only big change to the body is that there is a chain pattern, almost like a celtic-knot, that runs along the top cap and base of the mid cap.

The body is made entirely out of 304 stainless steel and it comes in a bunch of different colors. I’m using the black version which is shiny, but there’s also a matte black version that you can get. The other color options are just as vibrant as the original. The shiny blue, matte red, and matte purple look particularly good.

Out of the box the Dead Rabbit V2 comes with an Ag+ anti-bacterial 810 drip tip attached. The base of the drip tip has a band that says HELLVAPE. This drip tip is supposedly 99.9% effective at preventing bacteria from staying on the mouthpiece.

From my experience, it still accumulates lip gunk but maybe not as readily as other drip tips. I have no way of testing the bacteria on the drip tip so I guess I’ll just take Hellvape’s word on it. In the box you also get an extra 810 drip tip as well as a 510 drip tip adapter.

When you first take it out of the box, it’s nearly impossible to turn the top cap to adjust the airflow. It’s difficult to remove the mid cap as well. But once you lube everything up with a drop or two of eliquid it becomes much easier to adjust.

The build quality is fantastic on this RDA. I can’t speak to the machining of the logo but the airflow holes are precisely cut, the chain-like patterns are perfect, and everything fits together smoothly and properly. I’ll get into the build deck a little later but even its design is well thought out and nicely implemented.

For airflow there are two large slots. You have two options for your type of airflow: downward angled slots or honeycomb style airflow.

The open slots provide a lot of airflow and the slots are angled downwards to hit the coils. Vaping with the airflow wide open makes a rather loud whistling sound that I’m not a big fan of. The airflow feels smooth but you can definitely hear it. Compared to the original Dead Rabbit, there’s a lot more airflow here.

The honeycomb style airflow is made up of two rows of holes, 6 holes per row. This is two less holes than the Drop Dead RDA. If I were to compare the two, the Dead Rabbit V2 has a slightly more restricted draw. The Drop Dead is already quite restricted but I don’t think that this is too restricted at all. It’s a nice, constricted draw. 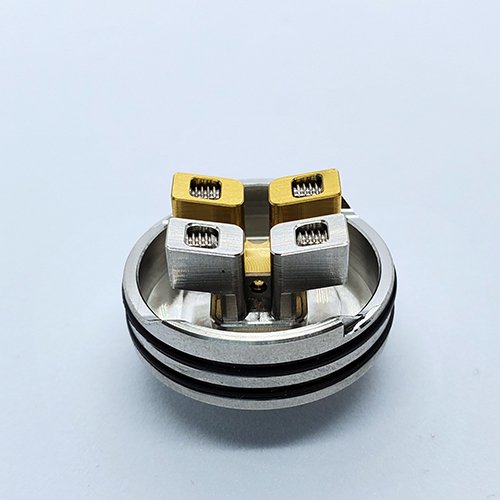 The Dead Rabbit V2 has a similar build deck to the original but there are some minor improvements that make it easier to build on. There are four rabbit-ear style posts and they’re secured by flat head screws. Spare allen head screws also come in the packaging.

Instead of the posts being at a 90° angle like the original, these posts are angled upwards. The base of the build deck also has a cut out for your coil snipping tool. Together, this makes it easier to snip the bottom of your coil legs.

The squonk holes is located in the center of the posts and it’s raised up a bit from the bottom of the juice well. The hole is in a good position to feed ejuice directly to your wicks but it won’t be able to suck back all the juice if you over squonk. The juice well is quite deep though and I haven’t had any issues with leaking so this shouldn’t be a problem.

There aren’t many changes to the build deck, rather little tweaks instead of a complete overhaul. But the original was liked a lot by the vaping community and easy enough to build on. “If it ain’t broke, don’t fix it” I suppose.

Building on the Dead Rabbit V2

The rabbit ear posts are designed to let you snip your coils from the bottom so that you don’t have to do any pre-measuring. But I found that trimming your coils to a 5mm leg length works perfectly for this deck. If you have a coil leg measuring tool, use that and cut your legs to 5mm and you can save yourself having to trim them after.

With your coils secured, it’s good practice to fire them at a low wattage to get out any hot spots. If you do get hot spots then you can strum your coils with ceramic tweezers to work them out.

With your coils secured, wicking is easy. I cut my wicks slightly shorter than the base of the build deck and it works out perfectly. Giving your wicks a good comb out is something that I like to do but it’s not absolutely necessary. I find it helps though. Tuck your wicks into the build deck, juice them up, and you’re all set. 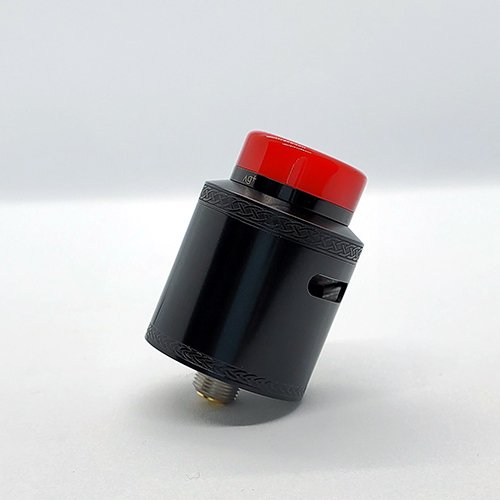 A lot of you are probably wondering if the Dead Rabbit V2 gives better flavor than the original or the Drop Dead RDA. To that question, my answer is yes. It’s not a drastic improvement but it’s certainly better.

The big difference between the Dead Rabbit V2 and previous Hellvape RDAs is going to be the ease of building and draw. It’s very easy to build on and the deck has been made even easier than the original. When it comes to the airflow, it’s a lot of airflow with the slots open. There’s a fair bit of whistling though and this might put off some people who like an airy draw.

Whether dripping or squonking, performance is on point. The deep juice well, combined with the top airflow slots prevent any chance of leaking. The positioning of the squonk holes on the build deck feed ejuice straight to my wicks so I had no downtime while vaping, even chain vaping is a non-issue.

The tweaks to this RDA are all relatively minor, but Hellvape have improved the ease of building and airflow from the original Dead Rabbit in a big way.

The angled bunny ear posts and cut outs on the build deck make building a breeze. The honeycomb airflow is also phenomenal for a restricted draw. My one complaint with this deck is the whistling from the wide slot airflow. The draw is still smooth, but the whistling can get annoying.

What do you think about the Dead Rabbit V2 RDA? Let me know with a comment!