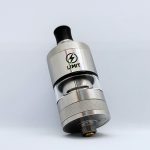 If you’re on the lookout for a new mouth-to-lung RTA then you might want to check out the Kizoku Limit. The Limit has a 3ml tank capacity and both slot and hole airflow. It’s a 22mm diameter MTL tank and it features a secure top-fill system that I really like.

The Limit has a single coil build deck but it’s also compatible with Aspire Nautilus coils. This means that you can either build your own coils or simply unscrew the deck and screw in replaceable Nautilus coils!

If you’re a mouth-to-lung vaper, should you pick up the Kizoku Limit?

This tank was sent to me from HeavenGifts for the purpose of this review. 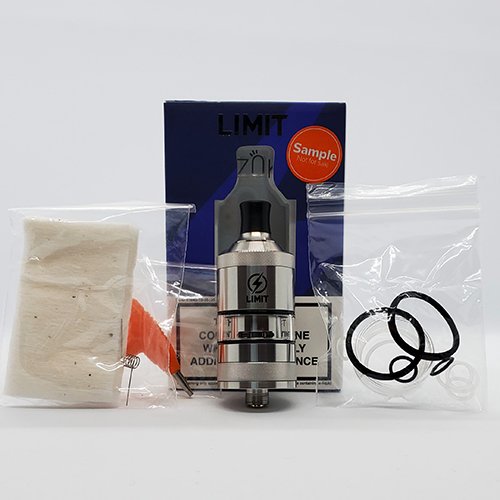 The Limit is made entirely out of SS304 stainless steel. The silver color that I’m using has a shiny finish that pairs well with other stainless steel and silver mods. The design is simple and straight cut but there is some knurling along the top cap as well as on the airflow control ring. LIMIT is cleanly printed on the body below the top cap.

The drip tip is 510 sized and narrow bore. The o-rings are on the drip tip itself so it’s compatible with other 510 drip tips that also have o-rings. I found the stock drip tip to be fine though and comfortable enough to use.

One of my favorite features is the way that they implemented the top fill system. A lot of people dislike push-to-fill top caps because they can open in your pocket and make a huge mess. But while the Limit does have a push-to-fill top cap, it’s also threaded. You have to first unscrew the top cap and then push backwards to reveal the fill port. It’s a genius fill system. This keeps the top cap secure from accidentally opening and you don’t have to put it down anywhere like traditional threaded top caps.

The Limit has a 3ml tank capacity and it also comes with a spare straight glass; there’s no bubble glass for this tank. I personally like the look of the straight glass as it keeps a streamlined appearance and I think a bubble glass would just look weird. Plus, because this is a MTL tank meant to be used at low wattages, ejuice isn’t going to go as fast as it would in a higher wattage RTA or sub ohm tank. 3ml is more than enough for a tank like this.

The Limit has an adjustable airflow control ring that gives the option of a single wide slot or six small holes. While this is marketed as a pure MTL tank, the single slot allows you to get a restricted DL draw which is nice when using replaceable coils. The series of holes gives a range from MTL to restricted MTL.

The six small airflow holes are all the same size. Vaping with all six holes open is a nice MTL draw that isn’t too restricted but it whistles a bit. Closing the holes doesn’t stop the whistling. It’s not very loud so I can live with it but it’s worth mentioning. Closing the airflow holes makes the draw progressively tighter. Three holes open seemed to be the sweet spot for a nice, tight MTL draw.

This build deck is small and simple. There are two posts along with an airflow hole in the middle of the deck. Your wire is secured by two small flat head screws which do a good job of holding the coil in place. If you do lose them, there are spares in the packaging.

The Limit comes with cotton and a regular round wire build and these are what I used for my testing. Keep in mind that if you do want to use other coils, they will have to be of a small ID. Larger ID coils aren’t going to fit on this deck.

In addition to the rebuildable deck, you can also use replaceable coils like you would with a sub ohm tank. The Limit is compatible with Aspire Nautilus coils and I was sent a pack to try out. All you have to do is unscrew the build deck and then screw in the Nautilus coil and it’s ready to be used as a normal vape tank. Really cool idea as it’s kind of the opposite of what a lot of vape tanks are doing with their rebuildable options.

I used the Limit RTA with both the regular round wire coil on the build deck as well as with the Aspire Nautilus coils.

Starting off with the rebuildable deck, the coil came out to around 1Ω. I vaped with three airflow holes open and the flavor is just alright. Compared to other tanks in which I’ve used this ejuice, the flavor doesn’t pop as much and doesn’t taste quite as good. I can’t say that it’s bad, but the flavor is definitely duller than with other MTL tanks.

As far as wicking goes, this deck works well. The cut outs for your cotton are perfect and I did not have a dry hit even when chain vaping. No flooding or leaking with the rebuildable deck either.

As for the Nautilus coils, the flavor is very close to the same. It’s alright but nothing amazing which is a bit disappointing considering that these are known as really great flavor coils. The lack of flavor definitely is due to the tank itself though and not the coils.

The idea and execution of this tank are good but unfortunately the flavor is lacking. It’s great that you can use either the rebuildable deck or replaceable coils. But the lack of dedication to one or the other ends up taking away from the flavor.

The Kizoku Limit MTL RTA isn’t a bad tank but it’s just not up to the standards that other modern RTAs have set. There are better options out there for a dedicated MTL RTA. Although if you really want a tank that can use stock coils or rebuildable coils, this is probably the best option.