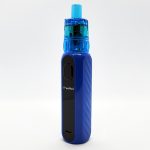 A few months ago I reviewed the Freemax GEMM kit, a vape pen that used disposable tanks. I was generally impressed by the mod and the disposable tanks had surprisingly good flavor.

Today I’ve got a similar kit for review and it’s the Freemax GEMM Pod kit. The GEMM Pod kit is a shrunken down version of the GEMM that also uses disposable tanks. It’s much smaller and lighter than the GEMM kit which makes it more portable. It comes with a 1.0ohm tank for use with nicotine salt ejuices and a 0.5ohm tank for regular nicotine ejuices.

The 1.0ohm tank is for MTL vaping while the 0.5ohm tank is for DTL vaping. The GEMM Pod kit has a maximum wattage of 25W, three power output levels and a 1300mAh battery.

If you have the GEMM should you pick up the GEMM Pod kit?

This kit was sent to me by FreeMax for this review. But as always, my thoughts remain unbiased. 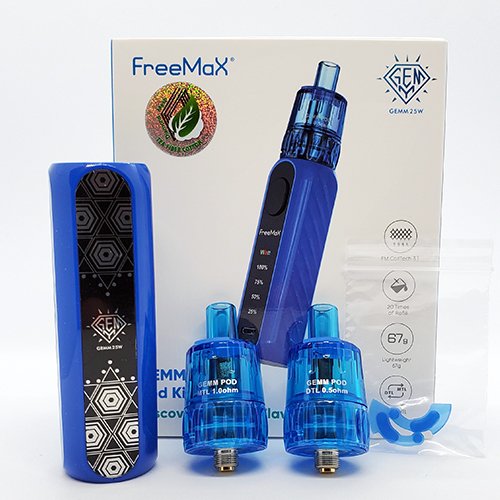 What initially stood out to me when I picked up the GEMM Pod kit is how light it is. It only weighs 67g because the body is made primarily out of plastic. It’s rather slim and trim too, although it’s not the smallest pod device by any means.

The size and weight of the GEMM Pod kit make it an easily pocketable device. It doesn’t take up a lot of room and it’s so light that you’ll barely notice it’s there. The downside is that the plastic body doesn’t feel great in my hand; it feels a little cheap.

This is advertised as a pod device but it’s more like a vape pen and tank than a pod vape. The GEMM “pods” are really just smaller GEMM disposable tanks and the GEMM Pod device has a 510 connector. I would expect a pod device to take pods that click into place or connect magnetically.

There’s also no draw activation but that’s something that a lot of pod vapes don’t have anyway. The single fire button on the GEMM Pod is firm though and doesn’t rattle around.

The sides of the GEMM Pod device has some light ribbing for grip. The back has a tribal-esque sticker under a clear panel. This sticker is different depending on the color that you pick up but they all have a tribal look to them.

These GEMM “Pods” are a lot like the GEMM disposable tanks that came with the Freemax GEMM kit, only smaller. They’re made out of PCTG plastic and have a 2ml capacity with a top fill port that is plugged by a silicone stopper. They’re solid little tanks. The coil is built into the tank and non-replaceable. These tanks go into the garbage when you’re done with them.

I tested two different GEMM Pods. These tanks use SS904L mesh coils and tea fiber cotton as the wicking material. Both come included in the kit:

The two pods look exactly alike but each pod is labeled to easily tell them apart. Each pod has a coil with about the same bore, so it’s really the airflow adjustment that allows you to MTL or DTL vape each one. In my experience, you can get a MTL or DTL vape from either one. However, these tanks perform best when they’re used as labelled.

How to use the GEMM Pod Kit

The GEMM Pod is simple and straightforward to use. Five clicks on the power button turns the device on or off.

The wattage outputs are different depending on which GEMM Pod is being used. This is a chart I got off the Freemax website: 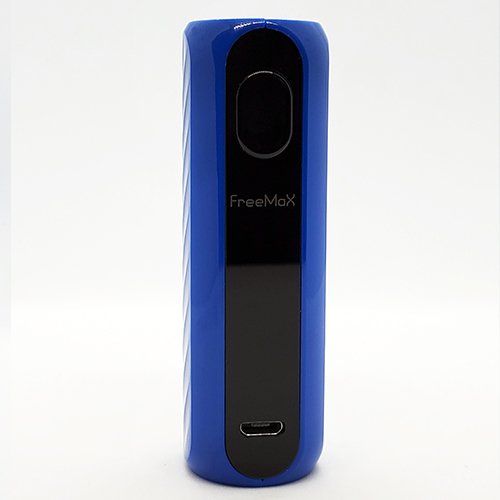 Battery life is a highlight of the GEMM Pod kit. It’s much better than I expected and beats out a lot of other pod vapes. But again, this is more like a vape pen than a pod vape. In any case, I was able to vape 2-3 full tanks before having to recharge the battery, depending on which tank and what wattage level I used.

Instead of colored LEDs to indicate battery life, there’s a series of percentages that light up on the front of the device: 100%, 75%, 50% and 25%. Self explanatory. The indicators serve the same purpose as colored LEDs and they’re accurate as well. 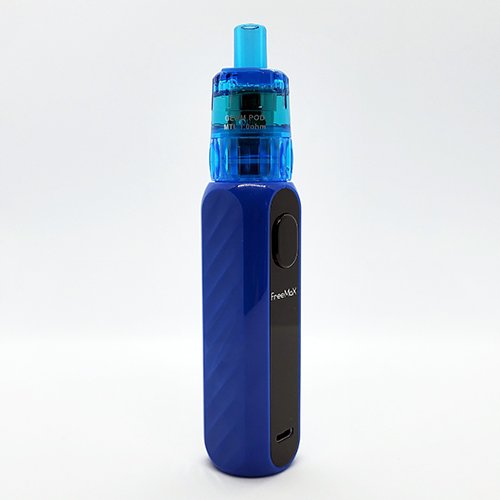 The GEMM Pod kit comes with both a MTL and a DTL tank. The airflow adjustment allows the option of vaping either one for a mouth to lung or direct lung draw but they really perform best when they’re used as they should be.

The 0.5ohm DL tank provides a smooth direct lung draw with a smidge of restriction. Even with the airflow wide open it’s not an airy direct lung draw which is nice. Clouds are good but the flavor could be better.

The 1.0ohm MTL tank is meant to be used with nicotine salts so I loaded up a 30mg nic salt ejuice. Vaping at the highest power level gives a good throat hit with great flavor. I had to close the airflow down almost completely to get a good MTL draw because otherwise it’s more of a DTL vape. Depending how much I close the airflow I can get a tight MTL or a really restricted MTL.

Coil life has been good. I’ve gone through 4-5 refills with each tank and they’re still vaping like new. Freemax state that these should be good for 20 refills and, with the way they’re going now, I don’t doubt it.

These tanks use the same tea fiber cotton that Freemax use in their other coils and both tanks wicked anything from 50/50 to 80VG without dry hits or leaking. My 510 connector has remained dry the entire time I’ve been testing this kit. 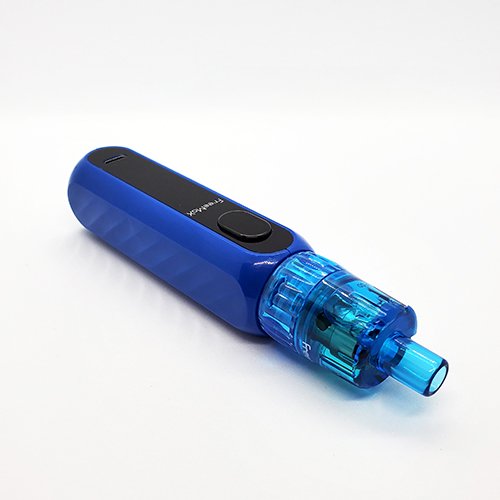 This is an odd “pod vape” but as a whole, Freemax have done a good job with the Freemax Pod kit. If you’re going to be using regular nicotine ejuices or want a direct lung device, there are better options. The 25W max wattage really limits the flavor for DTL and regular nicotine eliquids so a higher powered kit would do better.

But for nicotine salts, the GEMM Pod is a light and portable device that delivers good flavor and long pod life. The MTL draw can be adjusted with the airflow control ring to find a level of restriction that you’re comfortable with and the power levels can be changed for a comfortable throat hit.

What are your thoughts on the GEMM Pod Kit? Leave a comment down below.