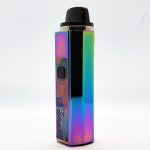 The Mace55 is a pod device from OneVape, the same company behind the OneVape Lambo. It looks similar to the SMOK RPM40 and even a bit like the Voopoo Vinci.

The Mace55 has a 1500maH built-in battery, three adjustable power levels and a 3.5ml pod capacity. It comes with a 0.3ohm coil and a 0.6ohm coil. The Mace55 is a DL pod vape and interestingly enough, the 0.6ohm coil has an airflow control ring built into it.

The Mace55 is more affordable than the RPM40 or the Vinci but is it worth picking up?

From a quick glance the Mace55 looks a lot like the SMOK RPM40 or Voopoo Vinci devices. It’s tall and thick with an octagonal body shape. The Mace55 is built well and everything about its construction seems solid but to me it just feels cheap. Part of the reason for this might be that it’s pretty light, despite having a bulky appearance.

The Mace55 comes in seven different colors and each one has a different design on the front panel. I got the rainbow colored device (which Danielle would have loved). It looks good but it’s not for me. It’s a mirror finish paint and it holds fingerprints like nobody’s business.

Along the top portion of the Mace55 are two large square window cut outs that let you see how much ejuice is left in the pod. Right below each window there are five airflow slots.

The pod for the Mace55 is circular and honestly massive. It’s a huge pod that holds 3.5ml of eliquid. The pod attaches to the battery magnetically and the magnets are acceptably strong. There’s a bit of wiggle to the pod though.

The mouthpiece on the pod also acts as the fill cap. It’s actually quite difficult to remove because it’s hard to get a grip on the mouthpiece but on the bright side, at least it’s secure. The mouthpiece has two plugs that seal the two fill ports on the pod. The fill ports are lined with rubber and are a bit small but I had no trouble filling the pod with pointy tip bottles.

The Mace55 comes with two coils:

The 0.6ohm coil is interesting because it has an airflow control ring built into its base. Although both coils are direct to lung coils, the 0.6ohm coil can be adjusted for a restricted DL draw.

How to Use the Mace55 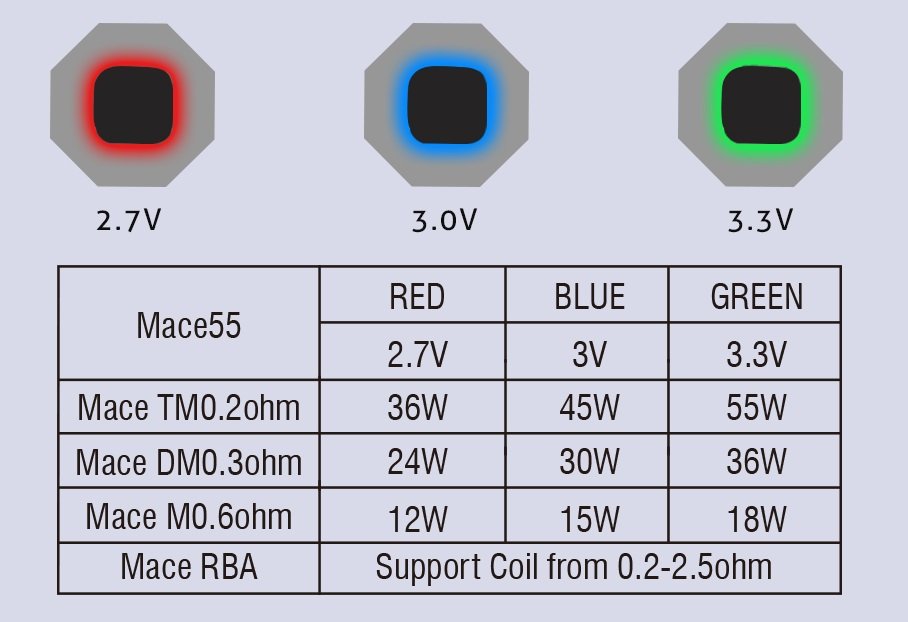 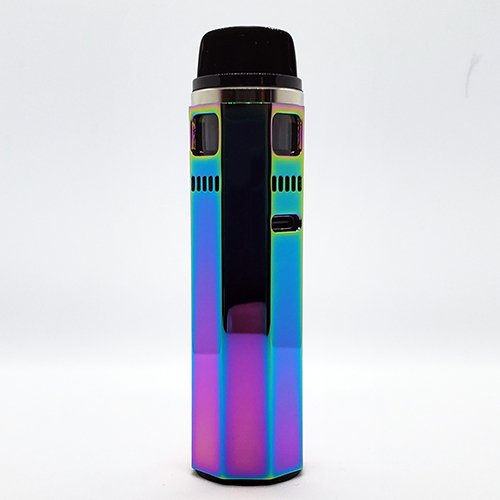 Battery life is good. I used the Mace55 on the highest power level, green, for an entire day of heavy vaping and it only died at the start of the next morning. It’s not stellar by any means but the battery will last through a full day. That’s good enough in my books. 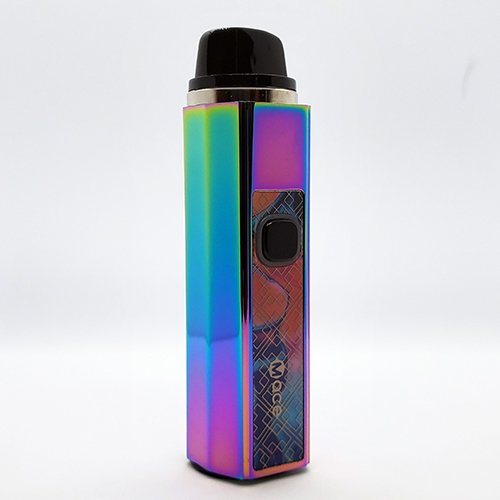 The 0.3ohm coil feels underpowered at the red power level of 24W. It vapes much better at the blue (30W) or green (36W) outputs. The vapor isn’t quite warm enough and feels more on the cooler side; I’m going to have to put this down as a con. Flavor is good but like the battery life, it’s nothing stellar or game changing. As for the draw, it’s an open DL vape but I wouldn’t call it airy.

The 0.6ohm coil, like the 0.3ohm coil, is best at the blue or green outputs. I tended to leave it on blue which is 15W. The vapor is suitably warm with the airflow restricted down. The draw is also more to my liking with this coil; a restricted DL draw. The flavor from this coil is maybe slightly worse than the 0.3ohm coil but they’re very close.

The OneVape Mace55 is a good pod device but it’s nothing too special. If you want something in the same style as the Smok RPM40 and Vinci but don’t want to shell out the cash, it could be a good purchase. The clear pod and ejuice viewing windows are nice, the flavor is good and the DL draw is nice. For regular nicotine ejuices It’s more portable than a mod and tank and it gets the job done. Overall, I think that OneVape did a good job with the Mace55.