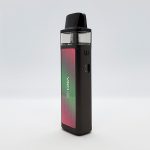 The Vinci Air is the newest pod device from Voopoo. Unlike the Vinci and Vinci X, the Vinci Air is small and light and has a shape that I’m more used to seeing from a pod vape. It doesn’t have as much power as the other Vinci devices but that’s not the point of the Air. Like the Voopoo Navi, this is a pod mod made for low to mid wattage vaping.

The Vinci Air uses Voopoo’s GENE.AI chip from the Vinci, Vinci X and Navi. It has a 4ml pod capacity and draw or button activated vaping. The Air has a maximum wattage output of 30W, a 900mAh built-in battery, and two airflow modes.

The Voopoo Navi was great but is the Vinci Air even better? Keep reading to find out.

This device was sent to me by Voopoo for this review. 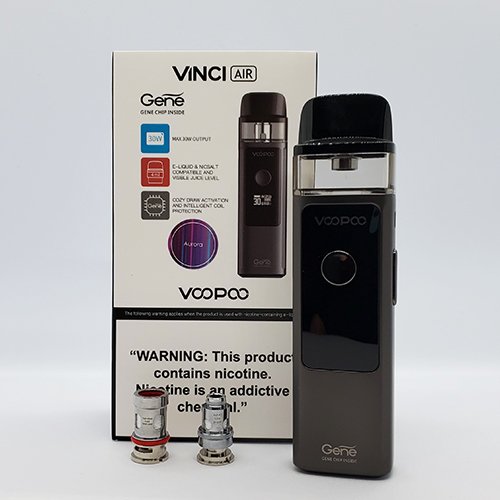 The Vinci Air looks a lot like the Vinci and Vinci X pod mods but it’s nowhere near as bulky or thick. It’s just shorter than the Vinci at 100.9mm tall but only 18mm deep which is a lot thinner. It’s a pretty slim and trim device. It feels really nice in my hand and it’s pretty light too at 80g.

The body is made out of zinc alloy and finished with a matte paint.  It looks really good and it doesn’t hold fingerprints. The corners are all rounded and build quality is high. Despite being so small and light, the Vinci Air feels solid and sturdy.

The back panel comes in seven different designs. I got the nicest of them all, the ‘Aurora Rainbow’ panel. The colors dance and change when light hits the panel so it’s pretty sweet looking.

The display on the Air is different from the Navi or Vinci devices. It’s also a lot smaller. It’s a simple black and white display that shows a battery indicator, puff counter, wattage and coil resistance.

On the front of the Vinci Air is a round fire button and there are wattage adjustment buttons on the side. The throw on the buttons are just right and they make a satisfying click when pressed.

How to Use the Vinci Air 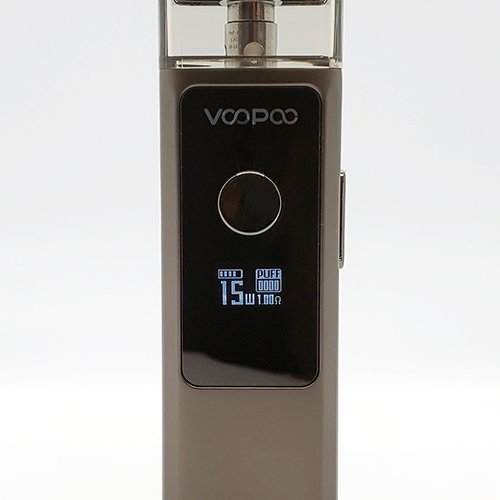 The draw activated firing works like it should. It’s not too sensitive but it doesn’t take a tremendous amount of force to activate either. The sensor is calibrated just right.

The Vinci Air also has two airflow modes. The airflow can be changed by spinning the pod 180°. The restricted airflow position is better for the 1.0ohm MTL coil. The open airflow position is more suited to the 0.6ohm restricted DL coil. Both coils have different bores so when they’re used with the right airflow mode there’s a big difference in the draw. This is something that I really like about the Air.

The pod for the Air has the same mouthpiece as the Vinci and Vinci X but it’s not the same type of pod; the Air isn’t compatible with Vinci pods. Reason being: the pod for the Air is much thinner and rectangular rather than square. The pod is completely clear so good on Voopoo here.

The pod is held in place by two very strong magnets. I can lift the Air by the pod and shake it around without the pod coming out. The fill port is on the side of the pod, near the bottom so you have to remove the pod to fill. The fill plug is thin and I found it difficult to remove, even with long nails. The fill port is large and filling with any type of bottle is easy.

The Air comes with two coils:

The 1.0ohm coil has a much smaller bore and is meant for nicotine salts and MTL vaping. With the pod in the restricted airflow position it’s a tight MTL vape. A 30mg nicotine salt is just right at 12W but this coil can probably be used with higher strength salts, too.

These coils are plug n play and pressure fit into the bottom of the pod. The coils don’t come pre-installed so you can use whichever one you want to use first. Just remember to prime the coil before you use it! 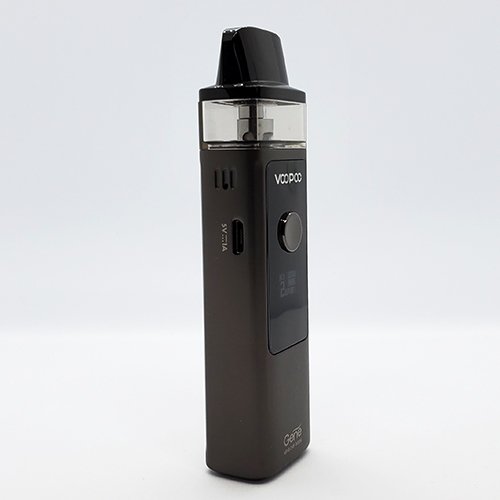 The Air has a 900mAh battery which isn’t too bad, but it is on the smaller side. Using the 1.0ohm coil at 12W I managed to go through around ¾ of a pod. This might not seem like much but this translated to about two days of vaping. Vaping at 12W really doesn’t use that much eliquid so my ejuice went a long way.

Using the 0.6ohm coil netted me (understandably) shorter battery life. I got through about half a pod and it took a half day to do so. When using this coil, the Air probably won’t last you a full day of heavy usage on a single charge.

Charging times aren’t bad though. It took me almost exactly an hour to recharge the Air which isn’t too bad. But it doesn’t have pass-thru charging so you can’t vape while you wait. 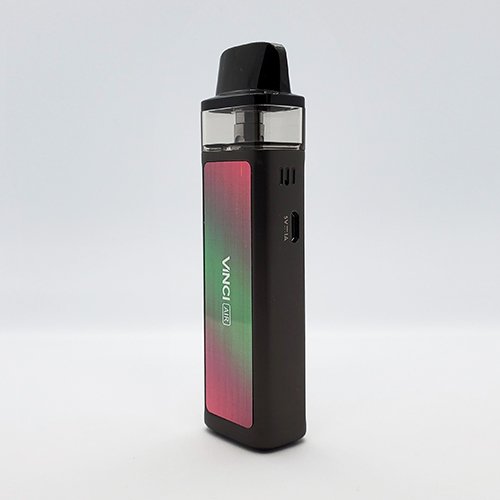 The Vinci Air is the first Vinci device that delivers a true MTL vape and it’s a very nice draw. The 1.0ohm coil with the pod set to the restricted position delivers a tight MTL vape that is warm and pleasant at 12W. I’m using a 30mg nicotine salt and the throat hit is beautiful. If you like tight MTL draws then you’ll like this draw for sure. Flavor is fantastic.

The 0.6ohm coil is the same as for the Navi and other Vinci devices. Maxed out at 28W it still feels like it could go higher but it’s a nice draw. A 6mg regular nicotine ejuice is just fine and the flavor is good. I get a restricted DL draw with this coil that I really like.

I’ve had no dry hits with either coil and no leaking either. Coil life is noticeably good as well. I’ve used both coils for at least 5 refills each and there’s been no change in flavor or performance. These are some of the longest lasting coils out there, hands-down.

The Vinci Air is my favorite of the Vinci devices. The 0.6ohm coil is good for a restricted direct lung vape but the 1.0ohm coil is where the Air shines. As someone who likes a tight MTL draw, the 1.0ohm coil for the Air is on point and delivers just the right draw with incredible flavor to back it up.