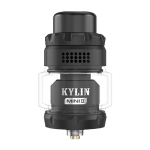 The Kylin Mini V2 RTA from Vandy Vape is the follow up to the original Kylin Mini RTA. It is a single coil RTA, but Vandy Vape has changed to a top airflow this time around. Where the original had a half-pipe style deck that provided airflow to the coil from 180 degrees, the V2 has an extended half-pipe deck which claims to hit the coil with air from 270 degrees.

The looks have also been changed, with bevels added to the top cap, airflow control ring and base, giving the V2 a more chunky look compared with the original.

Let’s have a look at the Kylin Mini V2 RTA.

The Kylin Mini V2 RTA has a 24.5mm diameter at the base and stands at 46mm tall from the base to the top of the included 810 delrin drip tip.

I received the stainless steel version. It is also available in matte black, frosted grey, gun metal, rainbow and gold.

On the base it has a protruding, fixed, gold plated 510 pin.

The top cap also has a knurling design for grip and it is unscrewed to reveal the fill ports.

The two fill ports are very large and sit in a deep recessed trough. I had no problem filling the tank even with a very chunky nozzle.

The Kylin Mini V2 RTA has a choice of two glass tanks. The bubble tank will give a 5ml liquid capacity and the straight glass gives a 3ml capacity.

The inner chamber is domed and on the outside of the chamber it has the branding ‘Kylin Mini II’.

Overall, there is nothing to complain about with the build quality of the Kylin Mini V2 RTA. All the threads are smooth and it’s a solid feeling tank. Looks wise, it’s a pretty standard looking tank, with knurling for grip doubling as cosmetic design. It does look better with the straight glass in my opinion, but you get the option of either a bubble or straight glass, so it’s all down to what you prefer. 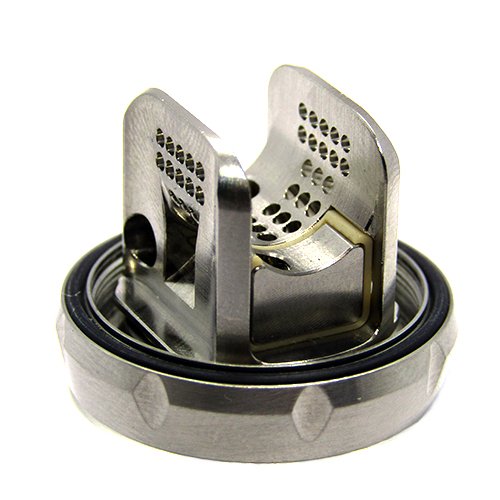 The stand out feature of the build deck is the ‘extended half-pipe’, which is U shaped and has honeycomb airflow holes at the sides and all the way underneath. Your coil will sit in the middle of the U shaped deck and air will hit the coil from both sides and underneath; Vandy Vape says air is hitting the coil from 270 degrees.

It is a postless deck, so your coil leads need to be trimmed before inserting the coil. The positioning of the coil lead holes also means your coil needs to be wrapped counter-clockwise for the coil legs to be dropping down straight. You can wrap clockwise, but it means you’ll have to twist your coil to straighten it, resulting in the coil leads bending at a diagonal. It’s no problem; I wrap all my coils clockwise, so I just straightened the coil and had the coil legs at a diagonal angle instead of rewrapping counter-clockwise. Just thought I’d mention this, though.

The grub screws for tightening down your coil legs are Allen headed screws and are located on the outside of the half-pipe deck, one on each side. The spare grub screws provided are flat head if you prefer to use those.

How to build on the Kylin Mini V2 RTA 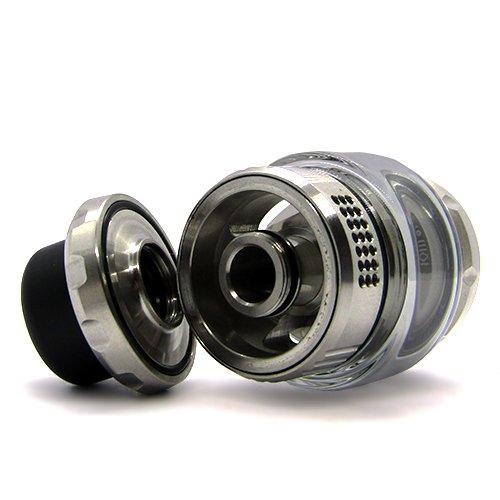 Building on the Kylin Mini V2 RTA is very straight forward. Vandy Vape provides a coil leg cutting tool which suggests cutting your leads at 7mm. The reason for this is that the coil needs to sit high on the deck so the air that hits the coil from the side does actually hit the coil. If your coil is sitting too low, the air will just pass straight over the coil and give you muted flavor.

You can then straighten your coil so it is sitting in the middle of the deck and dry fire your coil to remove any hot spots. 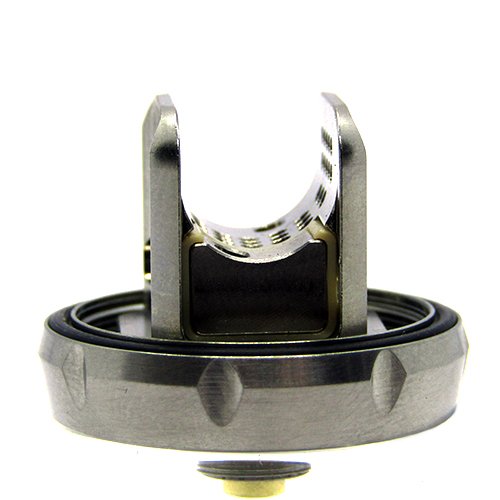 After threading your cotton through the coil, you can cut the tails to length and thin them out to your liking. Personally, I don’t have them running to the bottom of the deck, where there is a little ledge. I cut them about one millimeter above the ledge so that juice can get through the wicking holes without the cotton choking it off.

You will notice there are no slots for your wick tails to be tucked into. Your wick tails will need to be dampened with a little bit of juice first, then you can gently place the wick against the wall of the deck. You don’t want to squish the wick into place; just gently place it where you want it.

Finally, you want to place the deck into the bell chamber. If you line up the wick with the wicking holes the deck will lock into place and you can then screw the base on. 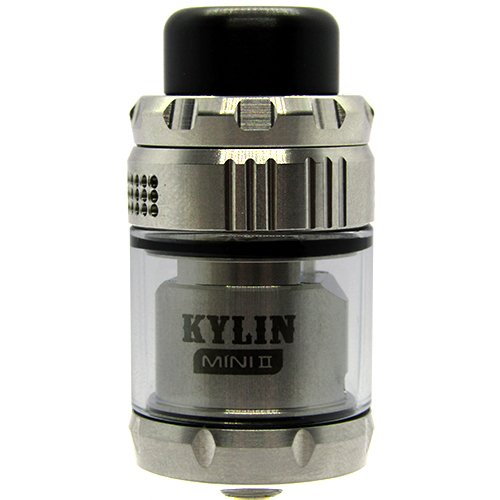 The first thing I noticed with the Kylin Mini V2 RTA is how smooth the airflow is. The honeycomb airflow intake on the airflow control ring really smooths the airflow, no turbulence at all.

It is quite airy when the airflow is fully open, I found closing it down halfway was more where I enjoy to vape. If you close it down to one column of air holes, it does give a semi-restricted vape.

I installed a fused clapton coil and the flavor is really nice from the Kylin Mini V2 RTA. Personally I don’t think much air is hitting the coil from the bottom. Due to it being top airflow, when you inhale the air is going to be taking the shortest route to your mouth, which is the side holes on the deck.

Regardless of how unimportant I think the bottom air holes on the deck are, it doesn’t take away from the Kylin Mini V2 RTA having a really nice flavor. It does, however, mean that it is important to have your coil up high, so stick to the 7mm coil leg length that Vandy Vape recommends.

To test this out, I did put a coil down lower on the deck and the flavor was very muted, which is why I don’t think the bottom airflow holes contribute much in the overall flavor.

Overall, the Kylin Mini V2 is a very good single coil RTA. I’ve enjoyed using it on a single 21700 mod, where a build of 0.32ohms has been lasting me all day on a single battery, with great flavor.

The airflow is really smooth, the deck is easy to build on (make sure you stick to the 7mm coil leg length for optimal flavor) and the build quality is good too.

Also filling the tank is really easy, even with chunky nozzles, due to the deep trough that the filling ports sit in.

At first I thought the positioning of the holes for your coil legs was going to be an issue, being positioned for a counter-clockwise coil, but due to the long length that you are cutting the coil legs, it doesn’t make any difference. You can just straighten the coil into place after tightening the screws, which adjusts the legs just fine.

I can’t really find anything to complain about with the Kylin Mini V2. If you’re looking for a single coil RTA that’s easy to build on and gives great flavor, then it fits the role perfectly.