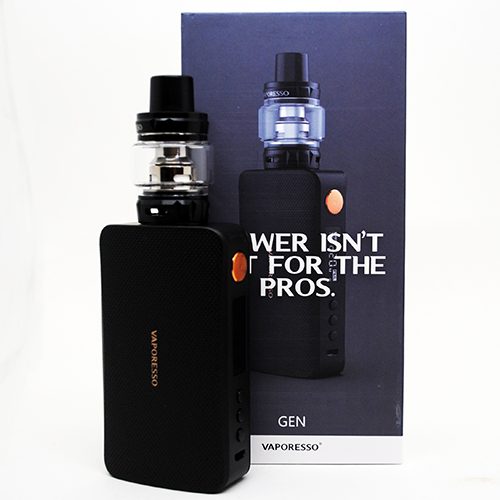 Vaporesso GEN Kit Review: The Mod That Has Everything 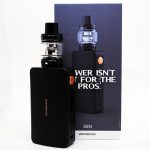 The Vaporesso GEN is the latest dual battery box mod from Vaporesso. It’s got a nice design and comes in multiple colors. It’s got almost every mode you could want on a box mod and that’s something that interested me from the start. The GEN will fire at up to 220W and comes with the new AXON chipset. The kit also comes with the SKRR-S sub-ohm tank.

Vaporesso have been making noteworthy mods for quite a while now so I’m going into this review with some high expectations. I’ve also been seeing a lot of hype surrounding this mod online. Let’s see if it’s really all that it’s cracked up to be.

This item was sent to us for review directly from Vaporesso.

Vaporesso GEN Kit Review: The Mod That Has Everything 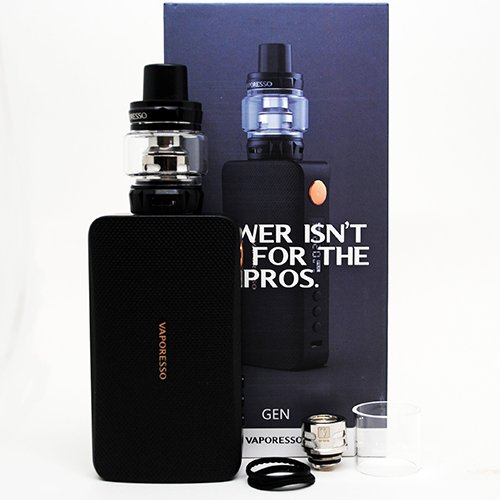 Right off the bat, one of my favorite things about this mod is the paint. It has a soft touch, rubberized coating that feels really good. Vaporesso say that it’s a four layer coating and I believe them. The coating makes it a pleasure to hold the mod and makes it less likely to slip out of your hand. I mainly just like to run my fingers over the paint because it feels so nice!

The shape and size of the GEN mod is perfect. It’s an average height and width for a box mod and it’s barely thicker than the 18650 batteries. It’s got a centered 510 plate (something I love to see) that will hold up to 26mm atomizers without overhang.

The styling of the GEN is very minimal but it’s nice nonetheless. There are small dimples, almost a mesh-like pattern, on both the battery door and the front plate. I received the black color for this review and it’s got a bronze colored firing button, 510 plate, and logos. There’s a small “V” on the battery door and “Vaporesso” on the other plate. The GEN also comes in silver, blue and red. The blue and red colors fade to black towards the bottom of the mod and look really cool.

Vaporesso’s build quality has never disappointed me and I’m happy to say that the GEN is no different. Everything feels solid and well-manufactured. There’s very little movement to the buttons and they don’t rattle at all. The battery door is especially secure. It doesn’t move at all and stays fixed in the same spot. There’s a small notch on the bottom of the door to remove it and access the battery compartment.

The battery compartment of the GEN is also well made. The spring loaded contacts easily load in your batteries and there’s enough space that it isn’t too snug. There’s also a ribbon for easy battery removal.

The screen on the GEN is 0.91” and in black and white. It’s nothing fancy but it gets the job done. The readouts are large and clear. It’s got all the important information on there like your battery level (in percentage), coil resistance, puff time and mode. As I said, nothing fancy but more than good enough.

Purchasing the GEN kit gets you the SKRR-S tank. It’s got a 25mm base diameter and looks good with the GEN mod. There are triangular notches on both the top cap and the airflow control ring for styling and grip. “Vaporesso” is also on the top cap.

The SKRR-S uses a threaded top cap that you unscrew to fill the tank. The fill port is nice and wide so there’s no issues with filling, no matter the type of ejuice bottle. There’s also no leaking from the fill port because of the silicone on the underside of the top cap. It makes a tight seal when closed and keeps any ejuice from escaping.

The SKRR-S comes pre-installed with a massive 8ml bubble glass. Holy cow! It’s awesome to vape with because you rarely have to worry about refilling. Going out? Just fill the tank up and you won’t even have to bring a bottle of ejuice! Just in case this glass breaks, they also include a 5ml straight glass but it would have been nice if it was another 8ml.

The two airflow slots aren’t as large as your average sub-ohm tank. Instead, they’re about half the size. Less airflow might concentrate the flavor a bit better but we’ll see. The airflow control ring is smooth and adjusts easily and also stays in place wherever you set it.

The kit comes with two coils for the SKRR-S:

Both coils are rather large in size and have multiple wicking ports on them. There are four sets of two ports on each coil which is interesting. This should presumably help the coils wick better.

The 0.15ohm coil is similarly rated at 50-80W and also best at 65-75W, according to the coil. This coil is a plexus mesh or a more spaced out mesh. The holes for the mesh are much larger than a traditional fine mesh. 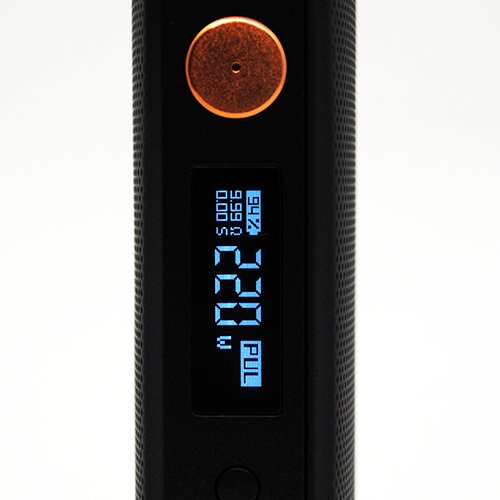 When I say that a mod has everything, I really mean it. The GEN is one such mod. The amount of modes it comes with is insane to the point of being almost overwhelming. I mean, it’s great to have a lot of choices but this might be taking it too far!

Clearly, there’s a lot of modes. Some of these are straight forward but others like Pulse mode, Power Eco, and Super Player mode are not.

Vaporesso say Pulse mode is supposed to pulse the wattage to give more flavorful and dense hits. This makes the wattage go down and then up a bit every time you’re taking a draw. To be honest though, I didn’t notice a real difference. It’s certainly a nice hit but nothing very different from the normal variable wattage mode.

Power Eco is an interesting one. It’s supposed to help you save battery and the GEN will ask you if you want to change to Power Eco when you get to around 40% battery. You can also set the mod to automatically switch to Power Eco when your battery is low. It seemed like I got slightly better battery life when using the mod in this mode but I can’t say for sure.

Super Player mode is for all those low ohm builders out there. This will let you install super low builds that wouldn’t otherwise fire on other mods or in other modes. I don’t build low enough to test this but it’s there for those of you who do.

Smart TC mode is supposed to automatically detect your coil material and set the correct TC mode. But in my testing, the GEN sometimes had trouble correctly identifying my coils. If this happens to you then you can always use the regular Temperature Control mode and set the correct material but I wanted to put this out there.

I’ve been using the Vaporesso GEN kit for a few weeks now and I’m thoroughly impressed by the mod. It looks good and it does what it’s supposed to do, whether using it with an RDA or with a sub-ohm tank. The AXON chipset is a great chip. My feelings about the SKRR-S tank are mixed though.

It’s not a bad tank but the flavor from the included coils are lacking. I used them both for a few days each. The 0.20ohm mesh coil is the better of the two and produces average flavor, nothing too special. The 0.15ohm coil performs very similarly. The coils definitely aren’t bad, but there are better coils/tanks out there. Wicking was great though and was likely aided by the multiple wicking ports on the coils.

The airflow slots on the SKRR-S are small so the draw is slightly restricted even with the airflow opened all the way. It’s a nice draw. Closing down the airflow halfway enhanced the flavor of the coils a little and gave me the restricted draw that I like.

Specifically speaking about the GEN mod, it’s a great mod to vape with. I didn’t notice a big difference while using Pulse mode but the regular variable wattage modes work great. The GEN fires almost instantly and delivers quick and steady power.

To test out the TC mode I used the GEN with my Mutant RDA and pair of SS clapton coils. Temperature Control works surprisingly well (I used SS Temperature Control mode, the one found in DIY, and not the “Smart TC” mode). The GEN adjusts the power accordingly and never gave me a dry hit. I got a pleasant, warm vapor around 430°F and the draw was consistent every time. There are very few mods that are actually good at doing TC so this is a huge plus for the GEN. 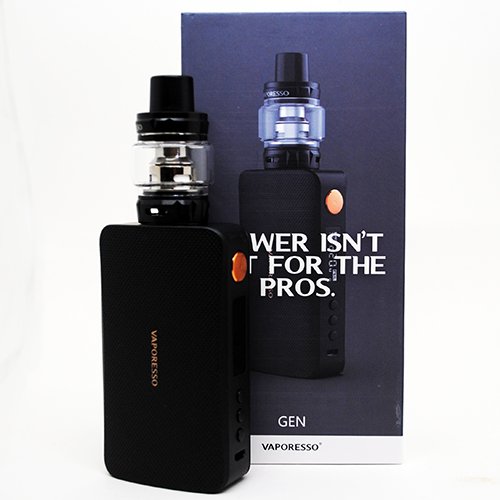 The GEN is a great mod. Vaporesso did a good job with the design and styling while also ensuring that it performs at a top level. There are a ton of modes to play around with but you don’t have to. It works just as good for regular wattage mode vaping. As a bonus, the TC mode is great too if you’re a TC vaper.

The SKRR-S tank isn’t anything special so I would just grab the mod if you already have a tank. But if you’re looking for your first kit, it might be worth getting the SKRR-S for the price of the kit.