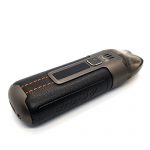 I’ve previously reviewed the Voopoo Vinci Air and Voopoo Navi pod devices and both of them were really good. The Argus Air is a bit different from both of these. What’s interesting is that it comes with two 3.8ml pods: a replaceable pod, and a pod that takes replaceable coils. This gives you the option of convenience, as well as the option to change your coils.

The Argus Air has adjustable wattage up to a maximum of 25W, two airflow modes, and a 900mAh battery. It works with both draw-activated firing and button activated firing.

A big thank you to Voopoo for sending me over the Argus Air for review. 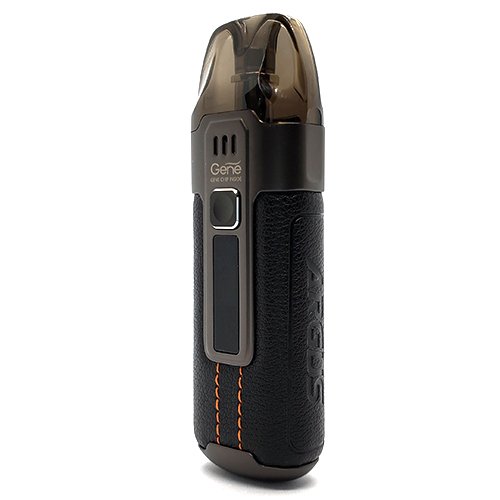 The Argus Air is pretty small and compact. It measures 95.3mm tall, 31.4mm wide, and 19.3mm deep. It’s a little chunky but it’s short so it’s still portable. It’s relatively light but it has enough weight to it that it doesn’t feel cheap; it feels like a solid device. I can throw this in my purse, or even in my small jeans pockets and I barely notice that it’s there.

The design of the Argus Air is sort of like a mix of different pod vapes. It has a similar shape to the SMOK Nord and a design that reminds me of a Geekvape product. The front and back of the Argus Air have a metal band that runs down the center of each side. My ‘Classic Black’ version has black leather around the sides and orange stitching just under the screen. This black leather and orange stitching really makes the Argus Air look like it could be a Geekvape device.

The overall look is pretty clean with very little branding. On the front of the Argus Air there’s a small sized “GENE” logo. Underneath it reads “GENE CHIP INSIDE” in a super tiny font. Voopoo & Argus are embossed on each side of the leather but it’s very understated and barely noticeable.

The display on the Argus Air is small at just 0.54 inches but it’s handy. It’s bright enough and quite clear and legible. Although it’s a black and white screen it still looks good. 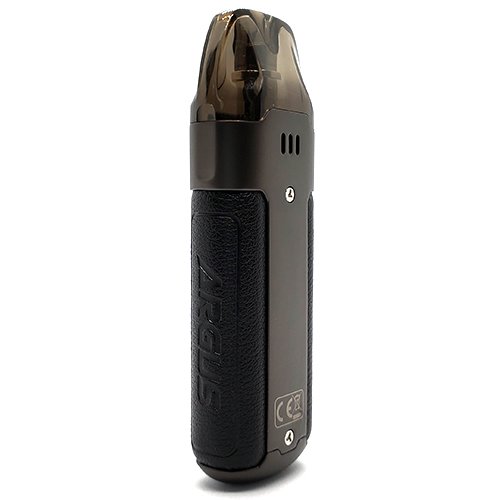 The Argus Air doesn’t have fully adjustable airflow with a slider or an airflow control ring. Instead you can rotate the pod 180° and this changes the amount of airflow to the pod. Each pod gives a different draw too.

How to Use the Argus Air 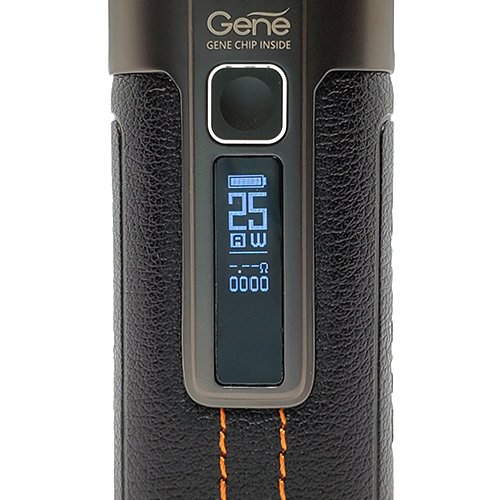 You can either use the button to fire the Argus Air or just draw on the mouthpiece. Most of the time though, I used the fire button because the draw activation takes too much effort to activate. It’s not nearly sensitive enough, no matter which pod or what airflow configuration you use. The 0.8ohm pod and the one hole airflow work the best, but I’m still not a big fan.

Power ON/OFF: Press the fire button five times to bring up the menu. Click the fire button once to scroll down to “Power Off”. Hold the power button to turn the device off.

Lock/Unlock the Device: Press the fire button five times to bring up the menu. Hold the power button to lock or unlock the device.

There is one thing to note about these pods is that out of the box, the replaceable pod is for MTL and the other pod is for DL vaping. You can get some MTL coils for this pod like the PNP-R1 0.8ohm coil or the PNP-R2 1.0ohm coil, but I don’t have these coils to test out how they perform with the Argus Air. However, I did try the 1.0ohm R2 coil in the Vinci Air, and Adam tested the 0.8ohm R1 with the Find S Trio. Both coils delivered really good flavor with those devices so I can’t imagine it would be any different with the Argus Air.

Both pods are identical except for the fill plug.The replaceable pod has a blue fill plug and the pod that takes coils has a black fill plug. The fill plugs are sturdy and the plug is deep. The fill hole is pretty big and I didn’t have any trouble filling, even with 100ml bottles.

The pods are ergonomic and they feel nice to vape on. The mouthpiece slopes in on the front and back and they’re contoured nicely. The pods are tinted too dark to see your ejuice easily so you have to hold them up to the light in order to check your ejuice level. I’ve complained about this so many times that I can’t understand why they keep doing this!

There are four magnets on the base of the pod that hold it into the battery. The magnets are strong and hold the pod in place properly. The pod has some wiggle when inserted but not enough to complain about. 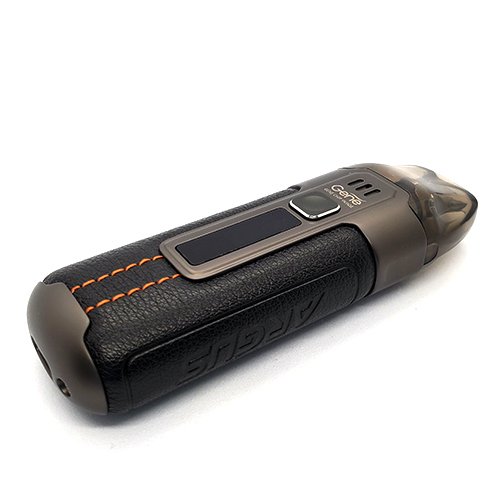 The 900mAh battery doesn’t seem too big but it actually lasts a long time. This comes down to both pods using mid-high resistance coils and because of that, they don’t need too much power to function.

I got one to two days out of the 0.8ohm pod at 15W which isn’t too bad. With the replaceable coil pod I usually had to charge by the end of the day. The battery life is decent but nothing too impressive.

A big plus for the Argus Air is that it has a Type-C charge port that supports 2A fast charging. This allows the Argus Air to recharge to full in under an hour. The downside is that it doesn’t support pass-through charging so you have to wait until it’s finished to vape. Either that or remove it early if you really need a vape! 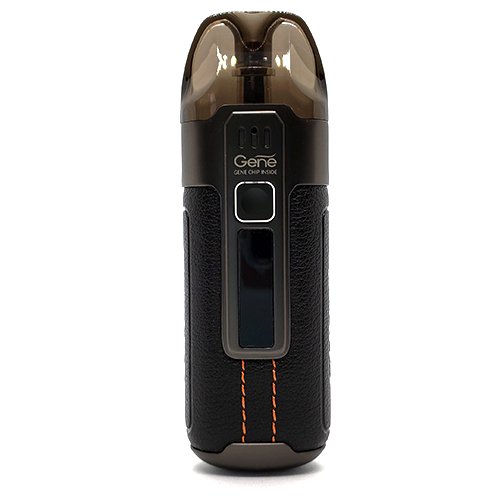 The Argus Air comes with the MTL pod and a DL coil in the box but to me, this is really a MTL device. I found the flavor, performance, and overall vape to be much better.

The 0.8ohm pod is a really good pod. You can get a loose MTL draw or a tight MTL draw depending on how you insert the pod. The Argus Air automatically sets the wattage to 13W when you insert the pod and at this wattage the flavor is good and so is the warmth. But upping the wattage to 15W gives even better flavor and slightly warmer vapor. You can even go as high as 18W without getting any dry hits off this pod but I liked the warmth at 15W the best.

You can use nic salts up to 50mg in this pod without issue. I used a 35mg salt as well as a 50mg salt and both vaped extremely smoothly. The throat hit is on point with this pod and extremely satisfying. This pod with nic salts is very close to the draw you would get off of a cigarette so it could be a good device to get for that family member that you know wants to quit!

The 0.6ohm coil and pod is okay but not as good as I expected it to be. I honestly thought that this coil would give better flavor and a better vape than the other but it turns out that I was wrong. The flavor is average and none of my ejuices really popped. It’s not exactly a bad coil, just nothing special. You can use this coil with nicotine salts but keep in mind that it’s a restricted DL/DL draw so I wouldn’t use anything above 20/25mg.

The good news for this pod is that you can purchase Voopoo’s other PNP coils and use them with it. Voopoo recommends staying above 0.6ohm and that makes sense seeing as the Argus Air can only fire up to 25W. The Argus Air just can’t put out the wattages needed for a lower resistance coil to work well. I suggest grabbing the 0.8ohm R1 coil or the 1.0ohm R2 coil for MTL use with this pod.

The Argus Air is another great device by Voopoo. It really shines with the MTL pod and nicotine salts. The flavor, draw, and overall performance are excellent. It’s worth purchasing this device for this pod alone. The other pod with the included 0.6ohm coil isn’t bad, but it isn’t great either.

The saving grace for this pod is that it’s compatible with Voopoo’s other PNP coils and there are some great MTL options available. Again, I wasn’t able to test these coils with the Argus Air but Adam used the 0.8ohm R1 coil with the Voopoo Find S Trio and I used the 1.0ohm R2 coil with the Vinci Air. Both coils were very flavorful and I imagine that they would be the same with the Argus Air.