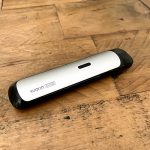 Suorin is a company that immediately makes me think of pod systems, due to the fact that they were one of the earlier companies to venture in this direction. They’re probably best remembered for their ‘Suorin Air’ pod series, which featured aesthetics that were very reminiscent of something a rather well known Californian tech company would design.

The Air was released sometime in 2017 (if memory serves me) and it had a couple of follow up releases too, namely the Air V2 and the Suorin Air PLUS, but they all lived in the same realm of design. This review is for the latest device Suorin have to offer — the ‘Shine’. Given their experience in the pod field, is it a worthy contender? Or is this just another pen style pod? Let’s find out.

This device was sent to me from Vapor4Life for the purpose of this review.

The Shine is another seemingly cookie-cutter pod design; there really isn’t anything new here. Having said that, it’s a very well constructed device: the zinc alloy body has a nice weight to it with black plastic running down either side, giving a smooth looking design and nicely integrating the pod and the base seamlessly. It all feels very solid.

I’ve had no issues whilst testing the device. The unit I have for review is the silver version. It’s a matte finish, which I like, meaning no finger prints over here! On release, the Shine will be available in a multitude of colors (eight in fact): black; silver; space grey; red; gold; diamond blue; teal blue; mint green. There is an inconspicuous amount of branding present at the bottom front and rear of the Shine, with a micro USB port set into the bottom.

Your fire/power button is located on the front and utilizes the standard 5 clicks on/off, with a very nice click and fast response time. The device can be fired either by an automatic inhale or via the button.

What’s clever is that if you use the automatic draw function or ‘constant wattage output’ you will ultimately use less of the battery power. However, using the button triggers a ‘full output mode’ so if you want a quick one or two powerful hits you can use the button to fire, or happily auto draw away for a gentle but constant vape.

In testing, I did notice the difference when using the button. The battery does drain quicker but the hit is definitely harder. I like this feature a lot. Utilizing the dual output for something useful is a nice little bit of innovation and not something I’ve necessarily noticed in other pods before.

Moving to the bottom of the device, on the front side there is a large LED to indicate power levels and on/ off:

Let’s talk about the Suorin Shine pod. OK, it is just a pod, but the finer details are what counts and there are a couple of standout pros about these pods. Let’s look at the general information first.

The pack includes two 1.0ohm pods that use 100% organic cotton. They wick like a dream, however they are in a smoked plastic pod which isn’t too great for viewing your juice levels. To the side of the pod, you will find a small black rubber fill port.

It’s a nice size port and fitted all of my 10ml bottle tips. In testing I didn’t find the rubber bung that easy to open and on a couple of occasions I even needed to use tweezers to grab it. This could really prove to be an issue whilst out and about if you need a top up.

These pods really snap in well to the device itself, magnets feel nice and strong and after my flick test the pod stays in very nicely with no wobble or movement at all.

The mouthpiece is what we’ve come to expect from a device like this but nevertheless it is very comfortable. As I said there are a couple of standout points, the first being that the resistance, max wattage and capacity are engraved onto the back of the pod itself, which I absolutely LOVE! It’s big, easy to read and I can’t really think of any reason why all pod manufacturers aren’t doing it?

The second standout point for me is throughout my testing of around 3 weeks I have had no leakage from the pod at all! No condensation build up, no liquid seeping and this includes me leaving the device with a full pod for a couple of days.

Vape quality is fantastic on the pod, it hits very nicely with some salt nic juice and I get a nice warm vape from it which is something a lot of pod systems don’t get right. The airflow is incredibly smooth and just the right tolerance for my MTL preference although this is a subjective point.

In terms of flavor it’s right up there with the best, not muted at all and the life span is excellent to boot. I’m still using the first pod I installed after 3 weeks and it’s still going strong. 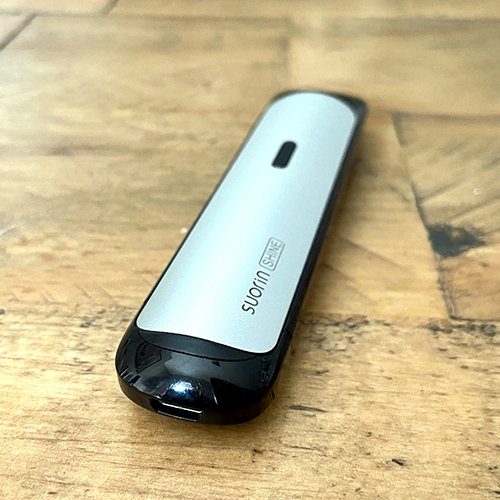 For a full charge on the Shine you will be looking at around 40mins which isn’t too bad at all. As stated before the charge method is a micro USB. I would really like to see USB-C as a standard now but it is what it is, no big deal. I have found the battery life to be more than adequate during testing.

700mah is a respectable battery for a pod and will last most of the day even when in heavy use. Expect a little less if you are consistently using the fire button to emit the ‘full power mode’. I really like that the LED is on the bottom of the front so it’s fairly easy to see your current battery level whilst you vape and if you don’t manage to then a simple double tap of the power button will let you know anyway.

On the front side there is a large LED to indicate power levels and on/ off: 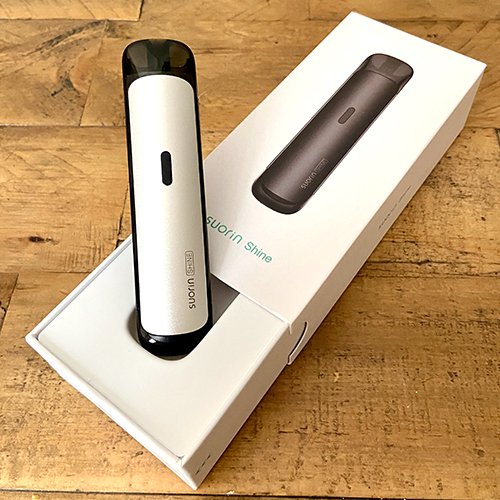 Taking everything we now know about the Suorin Shine into account, how did I find the overall performance? In short… amazing! Suorin have definitely proved that they are still a key player in the pod category of the market.

Most of the features and specs echo that of other pod systems. We all know how alike these devices are; user friendly, simple and very effective for support when quitting the stinkies. However, the pro’s of the Shine are what put it head and shoulders above the rest. Namely, a consistent good warm vape with dual output options, smooth airflow, no leaking or condensation, great battery life and a solid build.

The Shine also has a high level of security measures built in for extra piece of mind. Suorin are calling it 6S protection and it covers the following:

The rubber bung and dark pods are literally my only cons for this device and neither are what I would consider a ‘deal breaker’. Let’s face it — it’s a pod system. You will not be needing to refill that often. It’s not a juice thirsty RTA.

If you are a vaper looking for a compact, capable and fuss-free pen style pod system, then look no further than the Suorin Shine! This is very much a case of the positives outweigh the negatives and I for one feel as though the non leak pods are enough to sway me without all of the other great features.

It’s a solid device and one that I will certainly continue to use for quick out and about use. Highly recommended and a big thumbs up to Suorin for re-establishing themselves as key players in the refillable pod game!