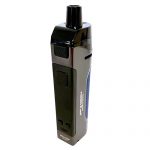 Wotofo have been responsible for some of the most popular vape products over the years. The Recurve single coil RDA with Mike Vapes (and the Recurve Dual for that matter), the Profile series in association with Mr Just Right 1 and countless other box mods and atomisers to write home about.

Today we are taking a look at the Manik, Wotofo’s new AIO pod mod system which pretty much puts them in direct competition with the likes of Voopoo with the Drag S/X, and Vaporesso with the Target series. In fact there are a great deal of these styled devices on the market now, mainly due to their ease of use for new vapers and relatively low cost of purchase. They give a very simple solution for what can be quite a daunting amount of information when you first get started with vaping.

So really the question is, has Wotofo done anything to stand out in this vast sea of AIO pod mod devices? Let’s take a look…

I was also sent:

Right out of the box the Manik feels very nice in the hand. It has a decent weight (once you have a battery inside it) to it and feels comfortable in the hand but substantial due to the good weight. This I really like, it doesn’t feel cheap at all.

The main frame is constructed of the usual zinc alloy. It’s a dark gunmetal colour and has a nice matte finish; this is going to be a pro for me. I much prefer a matte/silk finish to a gloss fingerprint magnet. There is a fair bit of branding on this device (see pics). I prefer minimal branding or at the very least it could be ‘ghosted’ rather than loud and proud, but this is just personal taste.

The display and button section virtually runs the length of the fascia and all buttons have a very nice tactile click to them. The fire button is one of those slightly angled buttons which makes an index finger fire the most comfortable way for me.

The display itself is tinted, which makes it a little on the dim side and unfortunately with mine, the display is not straight and flickers a bit. I doubt very much that this would be the case for all devices but it’s still going to be a con for my test unit.

All the information you would need is displayed on the screen: wattage, volts, coil resistance, a puff counter and a puff timer. We will dive more into the chipset later in this review.

To the rear of the device we have a really nice rubberised grip section. Mine is dark blue with red stitching which is very Voopoo esque in appearance, but it does a really nice job of allowing a good grip when holding the device. 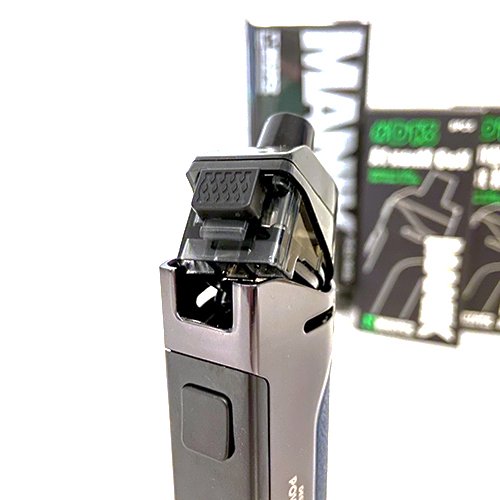 The top of the device, where the pod sits, is very clean. Wotofo has stated that the compartment where the pod sits is waterproof so that’s going to be a big pro; any leaks you may experience will not make it to the chipset and render your device useless. Contacts are nice and springy and there is a click button system which allows for your pods to be removed. This system is also nice, not that I dislike pods held with magnets, but there is just a certain satisfying click and a good amount of confidence that comes with a system like this.

Lastly, the battery door is a hinged and slide operation. The Manik operates using a single 18650 battery and whilst there is a micro-USB port, you really should be using an external battery charger to charge the battery. Positive and negative contacts are clearly marked and the door itself feels really solid when it’s closed. I didn’t have any instance of it popping open during testing. 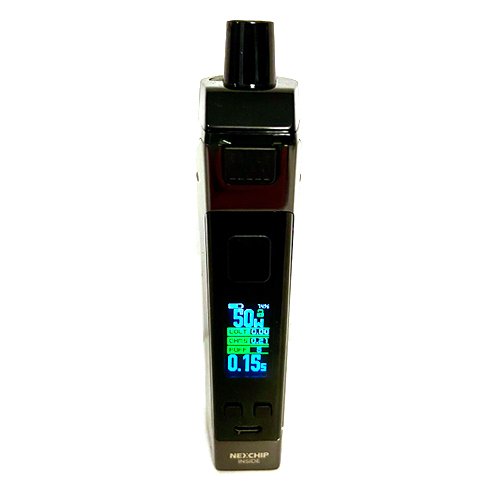 The Manik is powered by the new NexCHIP which works extremely well. It has all the usual safety features such as voltage protection, low resistance protection and short circuit protection, and it allows the pod mod to fire in 0.001 seconds. I can confirm it’s very quick and responsive, however I have no means of verifying the 0.001 seconds. But yeah… it’s fast.

You have the ability to fire from 5-80W, although I would steer clear of high wattages given that this device is only powered by a single 18650 battery. Battery management is also pretty good on the Manik. Obviously a single 18650 at high wattages is not going to last that long but I didn’t notice any unnecessary battery drain or a shortness of life. With normal use, my pod running at 50watts was lasting me around 8 hours.

All of the coils for the Manik are rated for fairly respectable wattages so there’s not much danger of needing the full 80watts but I guess it’s nice to know that it’s possible.

You have the ability to change the accent colours on the display to red, green, blue, yellow and white. This is always a nice touch however bare in mind that when using any colour other than white the screen appears a bit dull just due to the tinted nature of it. 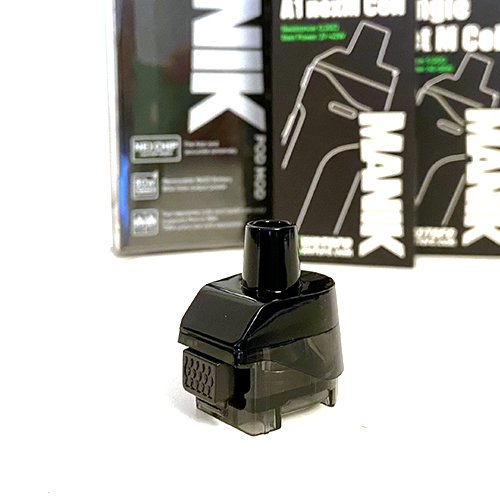 This is where the Manik really shines! I love the pod system for this device. Yes, there are some really similar features to other devices but let me tell you, Wotofo has made a few minor but genius moves with how this one works.

Firstly, as I already stated, I really like the push button fitting. It feels very solid with no movement whatsoever from the pod, this is a pro. As with many similar devices the plastic pod is a dark, smoked finish so it can be a bit hard to see your juice levels. Clear pods would be easier, but let’s not forget that this would change the whole aesthetic look which is why I think these devices are mostly darker pods.

The drip tip is very similar to that of the Vaporesso Target PM80 SE that I reviewed previously. It’s very comfortable in the mouth but not removable so if you were hoping to rock your own 510 tips that’s not going to be possible.

Holding a respectable 4.5ml of juice is also a pro, and the icing on the cake is the top fill! Let me be clear, bottom fill pods have never really been a con for me as long as the rubber bung is good and I can easily fit a gorilla bottle tip in there. However, once you use a top fill pod there’s just no going back. The rubber bung is firm and plugs up very nicely and the fill port is large enough.

I have experienced no leaking during my testing, although I’m sure that if you left it sitting long enough full of juice it would. Due to the fact that the pod is black and so is the fill port, you don’t even really notice it on the rear edge. Clever move Wotofo!

Let’s talk about coils: the Manik coils are great. Wotofo have gone down the path of using their NexMesh technology and the coils truly do not disappoint. My favourite by far of those I tested was the Clapton mesh D15 coils at 0.20. These coils offer amazing flavour and I would describe the vape as a very slightly restricted direct lung with nice cloud production and a lovely warm vape at 50 watts. The Clapton mesh coils do take a little while to ‘bed in’ but once they do it’s a one way ticket to flavour town, believe me!

All four of the coils available for the Manik are of the same resistance, 0.20ohm. It’s mainly the materials that offer the differences. The conical mesh, A1 nexM, and the single NetM are all very similar, nothing bad to write home about. Wotofo do make really nice coils but for me the Clapton Mesh stood head and shoulders above the rest for flavour.

I tested all the coils using a 70/30 and 80/20 ratio liquid and I had no dry hits or trouble wicking so this is going to be a pro.

But what if you want to have a more varied coil choice though? After all, Wotofo’s coils are great but they do not differ much in the grand scheme of things. Wotofo’s stroke of genius with the Manik is that it is also compatible with Voopoo’s PNP coils and with Vaporesso’s GTX coils!

This is an incredibly clever move — Voopoo and Vaporesso both have such a huge catalogue of PNP and GTX coils respectively and the availability of each is vast. Many people would hold these coils right up there as some of the best available and I would be one of those people, so for them to be compatible with the Manik is a very big deal indeed.

The airflow on the Manik is unfortunately non-adjustable, however the airflow is subjectively accurate to how I want to vape when it comes to a device such as this. The amount of airflow you are going to get is going to be directly affected by your choice of coil, and with the vast coil compatibility I don’t see this being too much of an issue.

You aren’t going to get a really decent MTL vape from the Manik, there’s just no way, but for a DTL sub-ohm vaper it gets by very nicely. I didn’t feel like the vape was turbulent but for comparison’s sake, it’s very similar to the Vaporesso PM80 SE.

My other side note to the airflow would be that it’s not the quietest I’ve used but do we really expect anything different from a device that isn’t rebuildable?

According to Wotofo’s website the Manik will indeed have a rebuildable coil, however I wasn’t sent this for review and haven’t seen it yet so maybe it’s still in production? I just felt that it was worth a mention for the review. 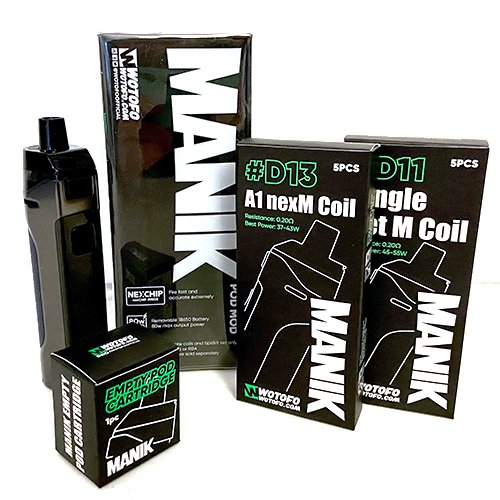 Whilst there are a few devices like this on the market, I for one did enjoy the Manik. The only real issues I came across were the display alignment and flickering but as I said before this could just be my review sample.

If you are looking for a device that has simple operation, nails sub-ohm vaping, and also has a vast array of coils that it’s compatible with, then you really can’t go wrong with the Wotofo Manik. Yes, we’ve seen this all before but the fact that it’s compatible with Voopoo and Vaporesso coils makes this one a winner in my book. I would like to get my hands on the rebuildable section and give that a whirl!