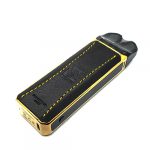 Hot on the heels of the Manik Pod Mod, Wotofo has released its little brother; the Manik Mini. This is a small and ultra portable pod vape that caters to MTL vapers who use nicotine salts. Sure, there are hundreds of good MTL pod vapes already, but there’s always room for improvement!

The Manik Mini has a 3ml pod capacity and comes with two pods: a 0.6Ω parallel coil pod and a 0.6Ω nexMESH coil pod. It has a built-in 1000mAh battery and adjustable wattage from 1-30W. There’s no airflow adjustment but Wotofo says that these pods are meant for MTL vaping so we’ll see how it does! 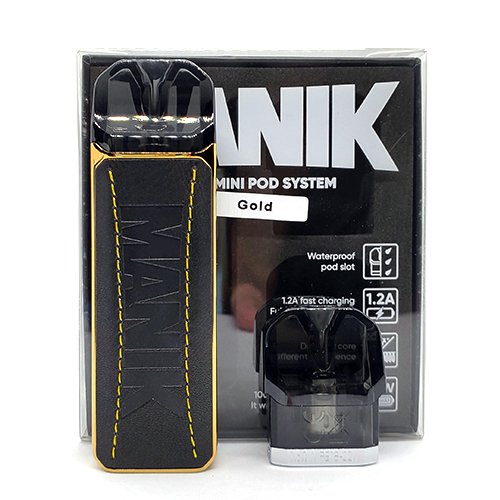 The Manik Mini is true to its name. In some ways, it looks like the smaller, pod vape version of the Manik Pod Mod that we recently reviewed. It’s a compact size at 92mm tall, 28mm wide and 16mm thick and it weighs a comfortable 64g. It’s just a little taller than a 30ml bottle of ejuice and just as wide so it’s very portable. Although it’s not the lightest device, the weight it has makes it feel solid.

Like the Manik Pod Mod, it has the same stitched leather padding with MANIK stamped into it. The other side of the Manik Mini also has a matching leather surface with a stamped Wotofo logo. While I don’t think that it’s real leather, it looks enough like the real deal and gives the Manik Mini a neat look that is unique among pod vapes.

The zinc-alloy frame thinly contours the leather pads and the 0.69” OLED screen. This frame comes in either black, silver, or gold, depending on the color that you pick. The leather pad comes in your choice of gray, blue, red, green, orange, beige, or black. 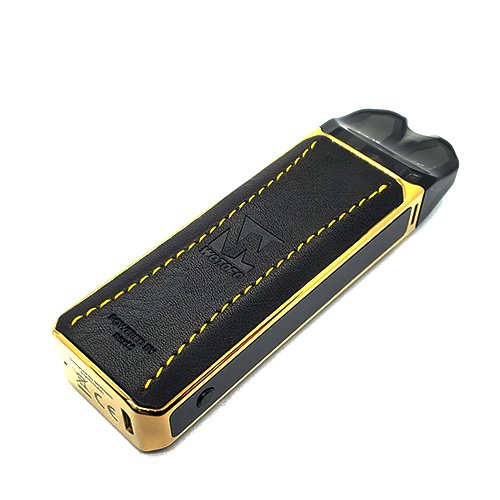 The pod attaches magnetically and sits snugly when attached. There’s no wiggling or movement with the pod inserted. On the sides of the Manik Mini there are two airflow slits that draw air into the pod when you draw. A noteworthy feature of the Manik Mini is that the pod connection area is water-proof. So even if ejuice or condensation builds up under the pod, there’s no risk of it seeping into the electronics and frying the device.

How to use the Wotofo Manik Mini 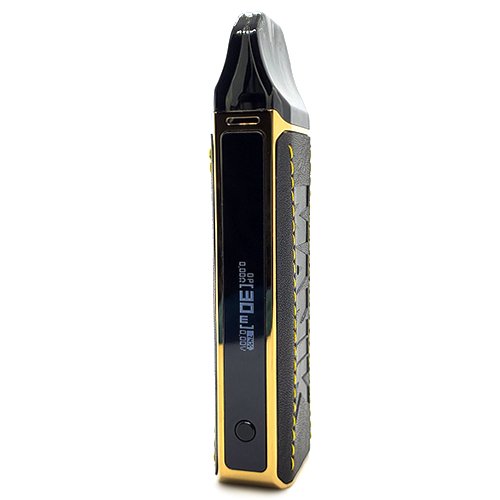 There’s a single button on the Manik Mini but it’s not for firing. This is a draw activated device so you just have to draw on the mouthpiece to vape. Pressing the button five times will turn the power on or off. Pressing and holding the button will clear the puff counter. But the main function of the button is to change the wattage.

Each pod will hold 3ml of ejuice and are side-filled. The port is plugged by a decent rubber stopper and the fill hole is large enough to comfortably fit bottle nozzles. But because of the side fill port you have to remove the pods in order to fill them.

The pods are darkly tinted which makes it difficult to see your remaining ejuice without a light source but with a light it’s just fine.

What’s interesting is that even though both pods have coils of the same resistance (0.6Ω), they each have different recommended wattages. This is due to the different types of coils used (Parallel vs mesh) and I’ll see how they do a little later on in the performance section. Both of these coils are made of Kanthal A1.

I’ve refilled each of these pods a few times now. While the Parallel coil pod is still going strong, the nexMESH coil pod started to taste a little off after a week of use. While this could just be a bad pod, I don’t have any more to test with. 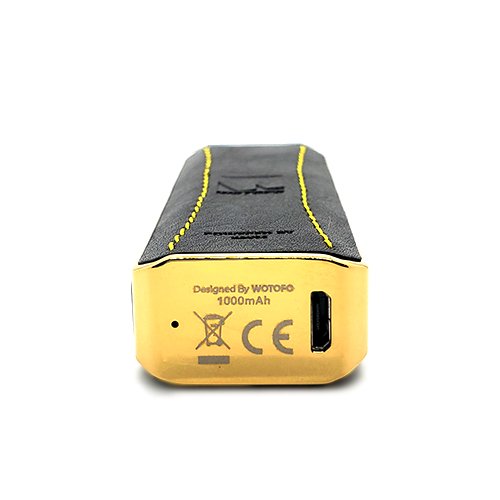 The Manik Mini houses a pretty big 1000mAh battery for its small size. This has been enough to get me through 2-3 days of vaping depending on the pod that I use. Unless you’re a human fog machine, you should expect to get about the same usage times too!

The battery life is good but charging times could be better. The Manik Mini uses micro-usb charging and takes just under an hour to reach a full charge. It does have pass through charging though, so you can vape it while it recharges.

I used a variety of 50/50, 36mg nicotine salt ejuices from Solace for my testing. Out of the two pods that come with the Manik Mini, the nexMESH coil pod is my favorite. It has a power range of 13-20W and a best wattage range of 15-18W. I get the best flavor from this pod at 18W and very warm vapor too. It’s a tight MTL draw that works really well for nicotine salt ejuices, providing a smooth but solid throat hit.

Even though it’s a parallel coil, this pod performs just as good as the nexMESH pod.  It has a power range of 15-25W but a best wattage range of 18-22W. Vaping this pod around 20W is a good vaping experience and a similar experience to the nexMESH pod. The draw is a little looser but it’s still a tight MTL draw. This pod does great with nicotine salts but even 6-9mg regular nicotine ejuices will vape nicely.

After a week of vaping I noticed a small amount of ejuice in the pod connection area under the pod but it was a very small amount. Definitely not enough to warrant worrying about or for me to say that the pods leak profusely, but enough to warrant a mention. I used exclusively 50/50 ejuices with the Manik Mini though so it’s possible that there won’t be any leaking at all with higher VG eliquids.

The Manik Mini is the latest in a sea of MTL pod vapes and it’s a decent device, however I don’t think that it necessarily does anything better than what’s already out there. I liked vaping with it, I really did, but it’s not a stand-out device in any way. That’s not to say that it’s bad because it’s not, but with the number of good pod vapes out there I think that you have to be better than just good to stand out.

The Manik Mini delivers a good MTL vaping experience and it’s good for nicotine salts which is exactly what I think Wotofo set out to do with this device. So Is it worth picking up? Definitely. But is it radically better than anything else out there? That answer would be no.

What are your thoughts on the Manik Mini? Leave me a comment down below.