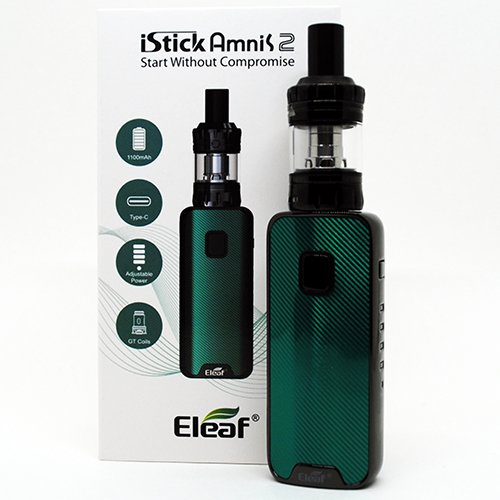 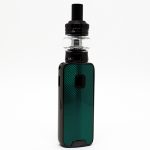 The latest in the iStick line is the Amnis 2 — and it looks nothing like the original. The Amnis 2 has been given a complete design overhaul and now has five output modes, a larger 1100mAh built-in battery and uses USB Type-C charging. Talk about upgrades!

This device is somewhere in between a pod device and a box mod because while it comes with a tank with replaceable coils, the mod itself works more like a pod mod. In any case, the Amnis 2 kit comes with the GTiO tank which includes a coil for MTL (mouth-to-lung) vaping and a coil for DL (direct lung) vaping so it should be pretty versatile.

Is the Eleaf iStick Amnis 2 worth your money? Keep reading to find out! 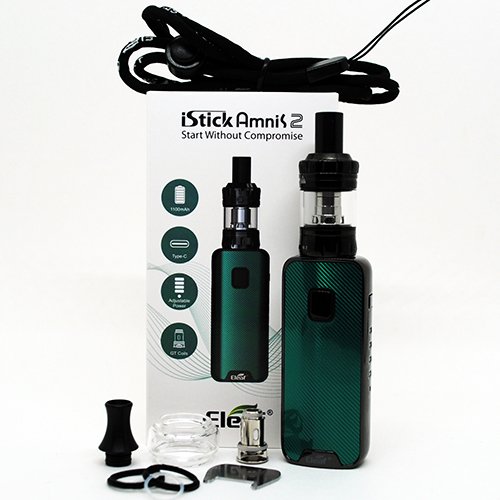 I have small hands so I was pleasantly surprised by the small size of this thing! The Amnis 2 mod is only 70mm tall, 30mm wide and 19.5mm deep; it’s adorably tiny! It has a rectangular shape but the edges are all rounded off which gives it a more oval shaped form factor. I can comfortably hide the Amnis 2 in my palm and the shape feels nice to hold.

In addition to its small size it’s also nice and light. The mod by itself is only 84g and the whole kit comes out to 124g with the GTiO tank attached. Not too heavy at all.

It comes in five colors and they all have panels with a shiny pattern of carbon-fibre-like diagonal lines. It looks really neat but I’m sad that I didn’t get the ‘rainbow’ version. The green that I got looks nice but I love me my rainbow mods! The rest of the body is painted in a mirror finish, gunmetal color that matches the GTiO tank.

If you want to wear your vape as a chain, boy do I have good news for you. The Amnis 2 comes with a lanyard and there’s an anchor spot to attach it at the top of the mod. I’ve never been one to wear my vape around my neck but I won’t judge you if you do. Well, maybe a little bit of judging :P.

The power button on the front of the Amnis 2 is rectangular and almost flush with the mod. It sticks out just enough to be usable and it’s surrounded by an LED ring to indicate battery life. It’s responsive and clicky when pushed.

On the side of the Amnis 2 is another button as well as 5 LEDs. This is the button to change the power mode and the LEDs are labeled with the following: Bypass, Low, Medium, High, & Max. Pressing this output button once will light up your current mode. Pressing it again will switch to the next mode. The current mode will also light up when you press the fire button.

Each mode fires at a different wattage depending on the coil that is being used. I’ll get into that in the coil section. 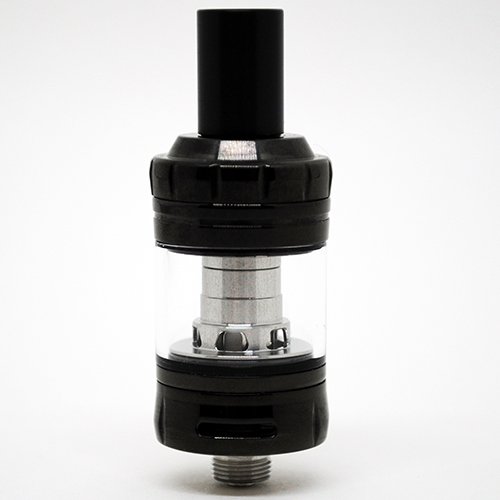 To match the tiny mod we also get a tiny tank! It has a mere 20mm base diameter which fits perfectly atop the Amnis 2. The gunmetal color matches the paint on the mod too. There’s some styling to this tank: vertical lines along the airflow control ring as well as along the top cap. It isn’t overdone and gives the GTiO a bit of flair. I like it.

Two tall 510 drip tips come in the kit. One is straight and preinstalled on the GTiO. The other is wide at the base and curves in to narrow at the top. They’re both the same bore though so they’ll deliver the exact same draw; it’s just a style preference. I like the curved mouthpiece — I think that it looks nicer. 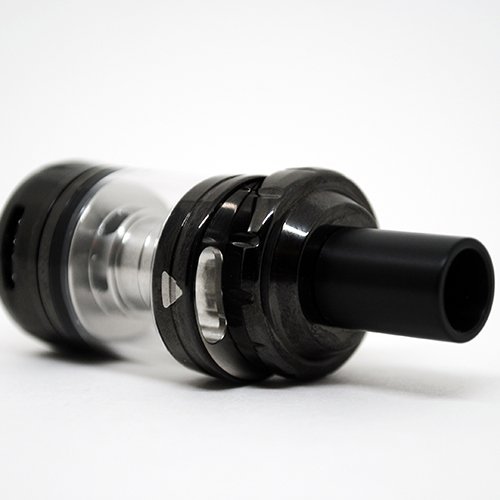 Filling is straightforward. The top cap pushes back and swivels to expose the fill port which is actually quite big for a small tank. There’s a silicone guard on the underside of the top cap that seals the port properly when closed. I never had leaking from the top cap even when I’ve laid the whole kit on its side.

The GTiO uses threadless ‘plug n play’ coils. This simplifies inserting or removing a coil because instead of screwing or unscrewing, the coil just pushes into the tank (and pulls out). Problems arise on tanks where the coils don’t fit tightly enough but it’s a tight seal with these coils so there’s no issue.

Each coil will fire at a different wattage in each output mode:

The 1.2ohm coil follows the bottom row. When I convert the voltage to wattage using Ohm’s Law this works out to be:

The 1.2ohm coil is only rated up to 14W so it probably shouldn’t be used in the ‘Max’ output mode but I’ll test it anyway. On the other hand, the 0.6ohm coil is well within the 25W rating of the coil even at max output.

The 1.2ohm coil has a slightly smaller inner diameter than the 0.6ohm coil which means that it will provide a more restricted draw, regardless of the airflow setting. 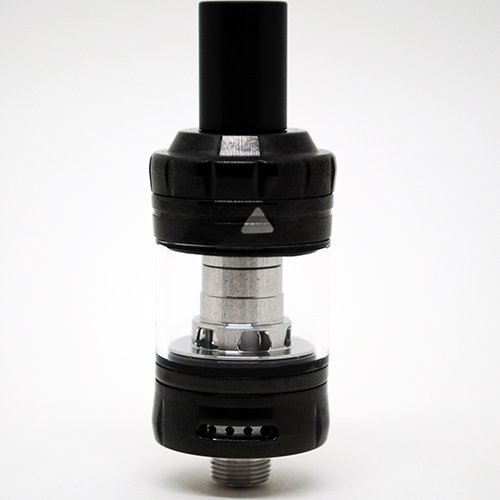 The airflow control ring on the GTiO is designed to allow either MTL or DTL vaping. It’s a single wide airflow slot that can be set to either an open slot or to four small airflow holes. Either configuration can be adjusted to restrict the airflow down. For example: the four airflow holes can be set anywhere from 1-4 holes. This type of control over the airflow is awesome to see on a tank.

Setting the airflow slot wide open allows for a slightly restricted DL draw. This can be closed down to achieve a restricted direct lung vape with the 0.6ohm coil.

Set to the four airflow holes is where, as I expected, I got a MTL draw. It’s a tight MTL draw to begin with and it got even tighter as I closed down the holes. Vaping on ‘High’ is much too warm for me with anything less than all four holes open. ‘Medium’ worked best as I closed the airflow down.

I’m happy with the versatility of the airflow. I’m usually skeptical of tanks that claim to do both MTL and DL for good reason; they’re usually only good for one type of vaping. The GTiO is actually good for both. 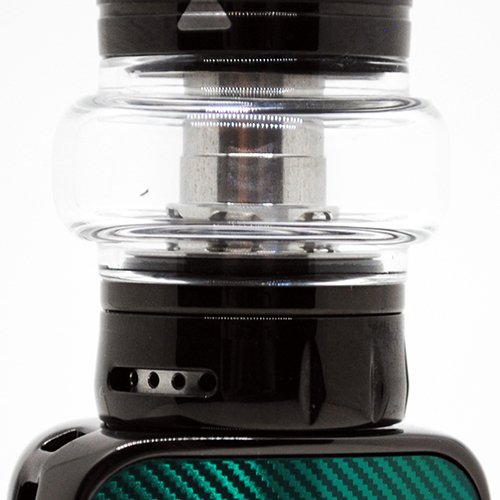 Praise to Eleaf for the USB-C charging port! It’s located on the side of the Amnis 2 near the top of the mod. This allows the Amnis 2 to stand up while it charges — which it couldn’t do if the charging port was on the bottom. Nice!

Usage times are above average but only with the 1.2ohm coil. On ‘Max’ I was able to get more than a full day of vaping but only slightly. That’s with heavy use. The 0.6ohm coil on the other hand is nothing special and on Max I got just about a full day before I had to recharge.

The LED around the fire button lights up to show the battery level and there are three colors:

When the device is dead the LED will blink red and then stop firing until recharged.

Charging times could be better, especially with the USB-C charging. I was expecting less than an hour to fully charge up the 1100mAh battery but it actually took 1 hour and 15 minutes.

The LED around the fire button stays lit up red until it’s finished charging with no colors in between. To check how charged it really was I had to pull out the charging cable and tap the fire button which is annoying. 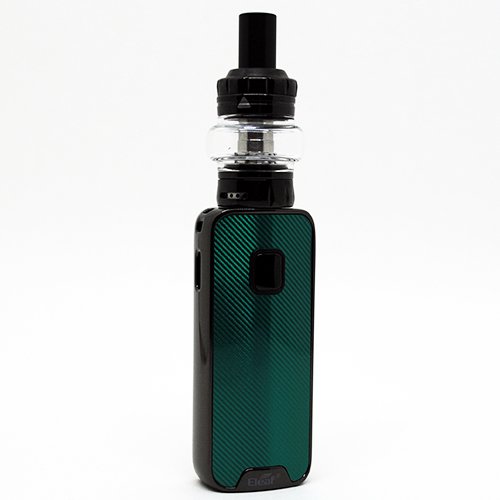 After using the kit for a week and a half I have a solid feel for the performance and it’s generally a positive feel. There are some areas that could be improved though.

Flavor and vapor quality using the 0.6ohm coil is good but not remarkable. I can’t knock this coil too hard because the draw is pleasantly warm and it’s a solid direct lung vape. But it doesn’t wick higher VG ejuices as well as I would like.

I used a 50/50 9mg regular nicotine ejuice and a 70/30 6mg ejuice with this coil. 50/50 wicks just fine and keeps up with chain vaping on the Max power output. But I started tasting some burning with the 70VG ejuice and had to knock the power down to High.

Surprisingly, the 1.2ohm coil ended up being my preferred choice. Flavor is more full and accurate than the other coil which is weird because the resistance is higher and the wattage is lower.

I set the airflow to three holes and loaded up a 35mg 50/50 nicotine salt. Vaping on Max is very warm but it doesn’t taste burnt. This is outside the wattage rating of the coil but it’s still perfectly fine with four holes open. The best vape is at High and the flavor is really good.

I used each coil for five days each and they still performed the same as when I first loaded them in. I’m only guesstimating but they could have probably lasted another five days.

This is a solid and versatile kit. I’m impressed by how well it does both MTL and DL — something that not a lot of tanks can successfully do. Battery life and charging times could be improved, as could the wicking of high VG ejuices with the 0.6ohm coil. But other than that there isn’t a lot to complain about.

This is a great kit for anyone wanting an ultra-portable mod with the ability to vape either MTL or DL. Even if MTL is the only goal this is still a solid device.