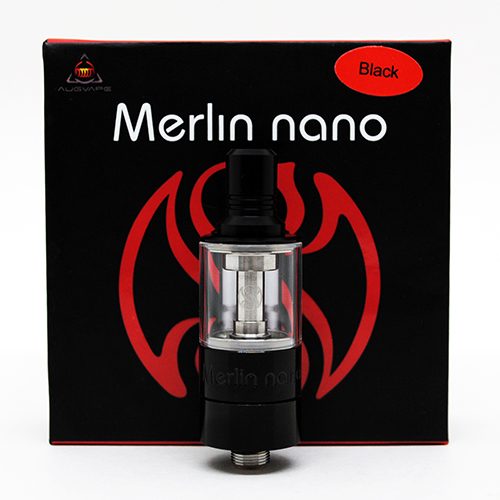 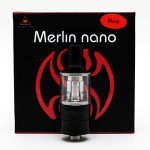 The Augvape Merlin Nano is a small 18mm RTA. It’s made for MTL vaping and offers adjustable airflow; it doesn’t have an airflow control ring though. Instead, the Merlin Nano comes with three different airflow “plugs” that can be inserted into the build deck in order to alter the airflow restriction. The build deck features two posts and is meant for a single, very small coil.

The Merlin Nano will hold 2ml of ejuice with the standard tank or 3.5ml with the included PCTG tank section. I’ve been excited to try the Merlin Nano from the time that I first heard about it so I’m glad to have finally gotten my hands on one. MTL RTAs are few and far between. Good ones are even rarer. Let’s see how the Merlin Nano stacks up.

This RTA was sent to me for the purpose of this review, directly from Augvape. 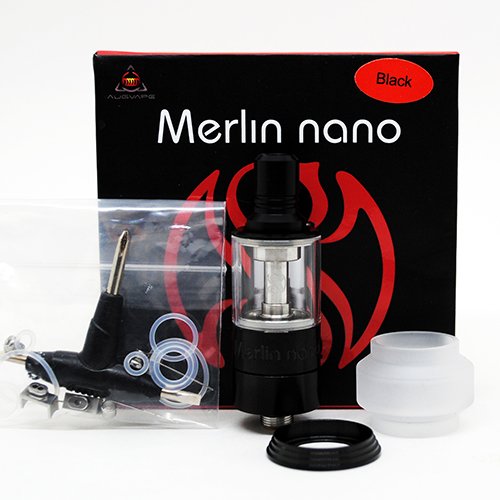 The Merlin Nano is a tiny RTA. It’s only 18mm in diameter so it’s among the smallest RTA’s out there. The small size looks a little odd on some bigger box mods but it comes with a 22mm beauty ring to expand the base diameter. This lets the Merlin Nano look more appropriately sized without affecting performance.

The Merlin Nano is made of stainless steel and its got solid build quality. All the pieces fit together smoothly and as they should so I have no complaints in this department. The design is a tad too simple though. Without the beauty ring, the body of the tank is devoid of any lines or curves and is completely straight. The biggest design feature is “Merlin Nano” subtly etched into the body.

The drip tip is a short and narrow 510 that is well-suited to MTL draws. It’s the only drip tip you get in the package and that’s strange for a MTL RTA, but it does the job just fine.

Filling the Merlin Nano can be a bit messy if you’re not careful. There’s no top filling. Instead, you have to flip the tank upside down and unscrew the tank section from the build deck. The fill holes are at the base of the tank section and are located right next to the chimney.

I’ve almost poured ejuice down the center hole multiple times while refilling so you have to be cautious. Tilting the tank slightly on its side is the best way to fill to ensure that you don’t get any ejuice down the chimney hole.

The standard glass on the Merlin Nano is straight-cut and will hold up to 2ml of ejuice. But you also get a second, funky looking PCTG section that expands this capacity up to 3.5ml. The PCTG section gives this tank a weird, out-of-this-world look but it’s worth using for the extra ejuice capacity.

The Merlin Nano’s most unique feature is definitely its airflow. There’s no airflow control ring that you can easily adjust. Instead, the Merlin Nano draws air from the small gap in between the tank and the base of the deck and comes with three different airflow inserts:

No matter which airflow you use, the Merlin Nano delivers a nice MTL draw. There isn’t much of a difference between the 1.0mm and 1.2mm inserts. They’re both a very tight MTL draw but not so tight as to be difficult to pull.

The 1.0mm dual hole insert is a looser MTL draw but I wouldn’t consider it to be “airy”. It’s still fairly tight and nowhere near a DTL.

The Merlin Nano is only 18mm in diameter so it should go without saying that the build deck is quite small. If you try to install anything but a small, round wire coil then you’re gonna have a bad time. Thankfully, the Merlin Nano comes with two round wire coils: a 1.0ohm kanthal coil and a 0.6ohm nichrome coil.

The build deck is pretty simple. There are two posts and each has a small Philiips head screw to secure your leads. The screws are good quality and easy to work with. They also grip the coil leads firmly and without issue. In the center of the build deck is a hole for the airflow insert.

Aside from the build deck, there is another important component. The “Peek Chamber” is a small plastic dome that encapsulates the build deck. You’ll have to replace this onto the build deck when you’re done building or else you’ll get a flooded deck and ejuice in your mouth.

Building on the Merlin Nano RTA

Build space is a little cramped on this build deck but it’s easy enough to manage. If you’re not using the included coils then make sure that you’re using a simple round wire coil. 7-8 wraps seems to be the perfect size.

Start by loosening the screws on the posts. If you haven’t already chosen and inserted your airflow insert then do that now. Take the coil and insert one leg into each of the posts. No need to pre measure your coil legs because you can easily cut them afterwards.

You want to try and center the coil as much as possible while ensuring that it doesn’t sit too high. Having about ⅔ of the coil above the tightened screws is ideal.

Once the coil is secured onto the build deck it’s time to wick. You don’t need much cotton at all. I took a very tiny sliver of cotton and threaded it through. You want to leave just enough cotton for the ends to touch the sides and bottom of the deck 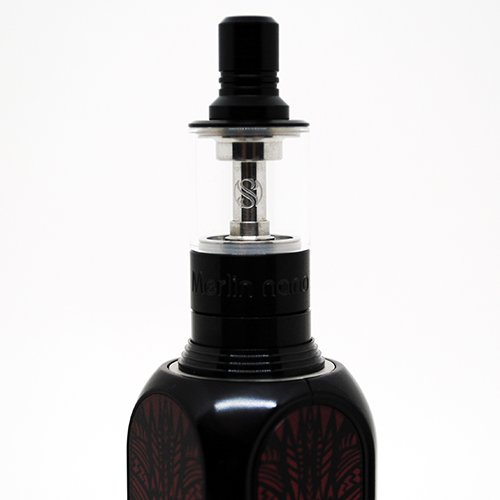 The draw is smooth and close to silent. My favorite setup is the 0.6ohm coil at 22.5W paired with the 1.0 or 1.2mm airflow insert. This delivers a warm and pleasant, tight MTL draw. The flavor is full, true-to-flavor and definitely among the top RTAs of this year.

Using the dual 1.0mm airflow insert is still great, however it takes away some of the flavor. If you prefer a looser MTL draw then this isn’t a deal breaker but it’s slightly less flavorful than with the other inserts.

I found the 1.0ohm coil was best at 18-20W. You get a draw that is warm, verging on cool, but it’s still very pleasant to vape on. The flavor is not as good as with the 0.6ohm coil but it’s very close.

The Merlin Nano kept up relatively well with wicking. Like other MTL RTA’s though, extra long-draws would verge on a dry hit. There just isn’t enough airflow with this type of tank to be taking multi-second draws. Otherwise, successive hits aren’t a problem. As long as your wicks are lined up with the holes in the Peek chamber there’s no issue. 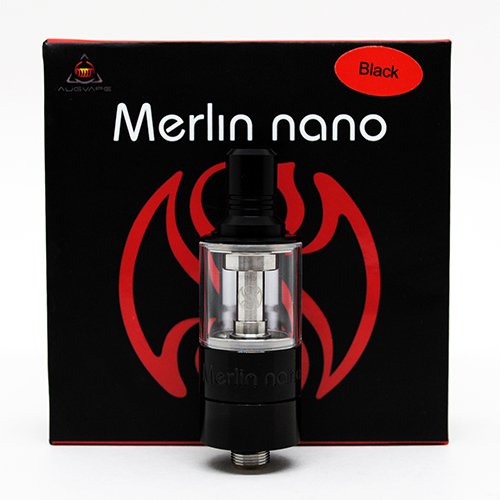 The tight MTL draw and excellent flavor make the Merlin Nano a great RTA. It’s one of the best MTL RTAs that I’ve tried. The build deck is also easy to build on although there isn’t a lot of room for large coils; you’ll have to use a simple round wire build in order for the coil to fit.

As for improvements, I’m not the biggest fan of the bottom fill. It can get messy and if you’re not careful you’ll pour ejuice right down the chimney and it will come flowing out of the mouthpiece. I’m also not a huge fan of the airflow inserts. As innovative as it is, I would have preferred a traditional airflow control ring to make it easier to change the draw.

If you’re in the market for a new MTL tank and want a rebuildable, I would definitely recommend the Merlin RTA. The excellent flavor and smooth draw makes it easy to look past the minor cons.