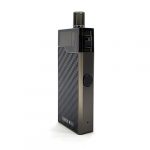 The Orion Mini is the latest “Orion” series pod device from Lost Vape. It joins the Orion Q, Orion Plus, and Q-Ultra as Lost Vape’s latest small pod vape. The Orion series has always been about maximum portability and simplicity of use, while still delivering performance and flavor. Today you’ll find out if the Orion Mini stays true to these principles.

The Orion Mini takes replaceable coils and has a 3ml pod capacity. It has a built-in 800mAh battery that charges with Type-C charging. It has a power range of 8-18W and features only button-activated firing. Unlike most of the previous Orion devices, the Orion Mini does not feature adjustable wattage. It does, however, have an adjustable airflow switch.

From a quick glance at the specs, the Orion Mini seems to have the portability aspect down. But how’s the flavor and performance?

The Orion Mini is part of Lost Vape’s “Quest” line of devices, which means that it’s meant to be more affordable without sacrificing too much of the quality that Lost Vape is known for. When compared to their regular line up, this usually means that Quest devices have less premium build materials, sometimes less features, and definitely no DNA chipset.

With that being said, the Orion Mini still comes in some very nice designs and colorways. There are three carbon fiber panel designs, three reflective panel designs, and three wood panel designs. Wood panels are not something that I would expect to see on a Quest device, and to be honest I’m not even sure if it’s real wood or just made to look like wood. Probably the latter. But in any case, the designs look great and look quite premium for a Quest product.

The frame of the Orion Mini is made out of zinc alloy. The frame comes in a variety of colors depending on which panel design you pick. The frame on my black carbon fiber unit is black, but the frame also comes in silver, gunmetal, purple, or red if you get other panel designs.

Despite this “ illusion”, I like the size of the Orion Mini. It’s very portable and has a small footprint when placed in a pocket, but still has a decent 3ml pod capacity. It’s a good balance of being portable and practical. 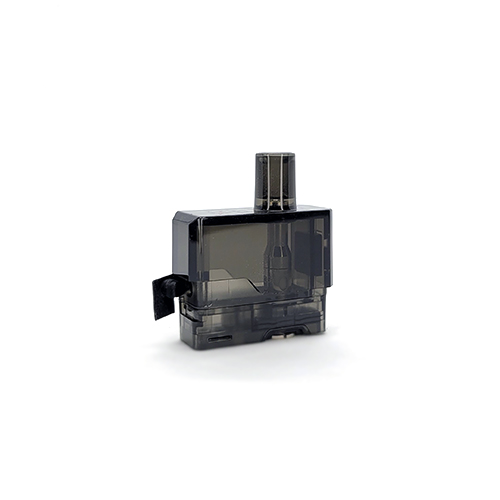 The pod has the drip tip built in. It’s smaller than the one on the Orion plus, both in diameter and height, but all around comfortable and nice. There is a dark tint on the pod so unless you’re near a light source it’s difficult to see how much ejuice you have left in the pod. The tint is darker than the one on the Orion Plus and this is a step backwards in my opinion.

The pod is attached to the battery with magnets. The pod only inserts one way and the magnets are nice and strong. Once the pod is inserted it sits with no wiggling or movement. It takes quite a bit of force to remove the pod from the battery so I had no worries about it coming loose in my pocket.

On one side of the pod there is an airflow control switch. You slide this switch up to open the airflow and down to restrict the airflow. There is a noticeable difference when closing down the airflow but I wish that the range was larger for more fine-tuned adjustments. As it is, the switch is still useful and features a nice amount of resistance so it stays where it is set.

There is a single round fire button on the Orion Mini. This has to be pressed to vape because there is no draw-activation. Pressing the button 5 times will turn the device on or off. Below the fire button is an LED indicator for your battery life which will light up red, blue, or green depending on how much charge you have left.

Although this is a Quest device, the Orion Mini is well made. The design stays true to the Orion line of devices but now looks more modern and suited for 2022 and beyond.

How to Use the Orion Mini 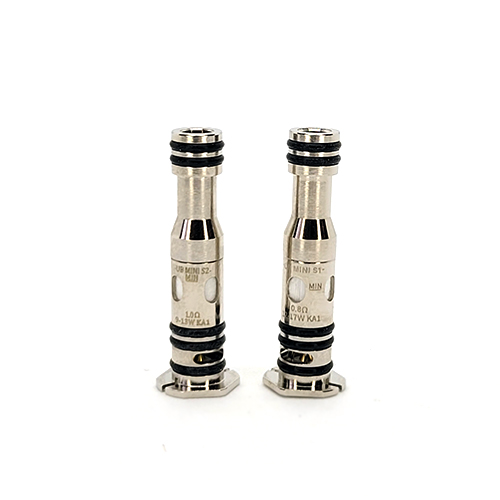 Due to its simplicity, the Orion Mini is a device that is perfect for beginners, but it’s just as attractive to more advanced users like myself for the same reason. It’s a hassle-free pod vape that is easy to set up and use. Sometimes I just want something to vape on that I don’t have to fiddle with and adjust.

The first step in using the Orion Mini is deciding which coil to use. A 0.8Ω coil and a 1.0Ω coil come included in the box and both are going to be perfect for nicotine salt ejuices. The 0.8Ω coil delivers a slightly looser MTL draw but works at higher wattages (12-17W), while the 1.0Ω coil is a bit tighter of a MTL draw and delivers a cooler vape due to working at lower wattages (9-13W). They both perform similarly so try both and see which one you like. 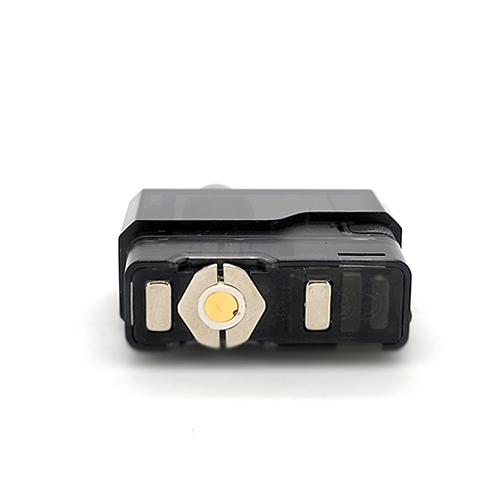 Take your bottle of ejuice and open the rubber bung located near the bottom of the pod. Fill the pod up with your ejuice of choice and wait for 5-10 minutes for the coil to properly saturate with ejuice. 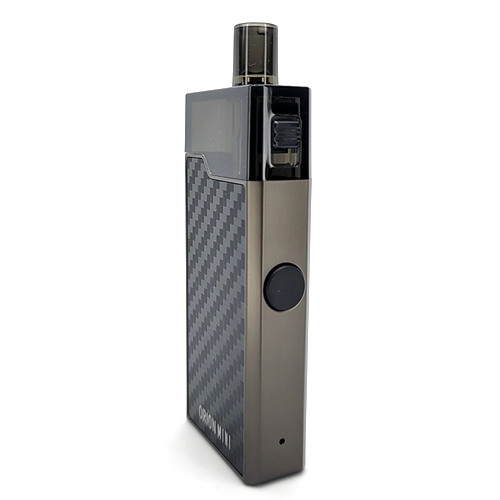 The Orion Mini has a simple 1 LED indicator for battery life. The 800mAh battery charges with Type-C charging through a port located on the bottom of the device. When I used the 0.8Ω coil I usually vaped around 2 full pods (6ml) of ejuice before having to recharge. When using the 1.0Ω coil I usually got to 2 and a half pods before having to recharge. It’s a slight difference so 2 to 2½  pods is what you can expect out of a full charge.

The LED indicator lights up either red, blue, or green when you take a draw and this tells you your remaining battery life. Green is more than 3.9V, blue is 3.7 to 3.9V, and red is less than 3.7V.

Using the included cable and a wall adapter, the Orion Mini recharges to full battery in about an hour. While charging the LED will pulse. When it is fully charged, the LED indicator will stay lit up solid green. 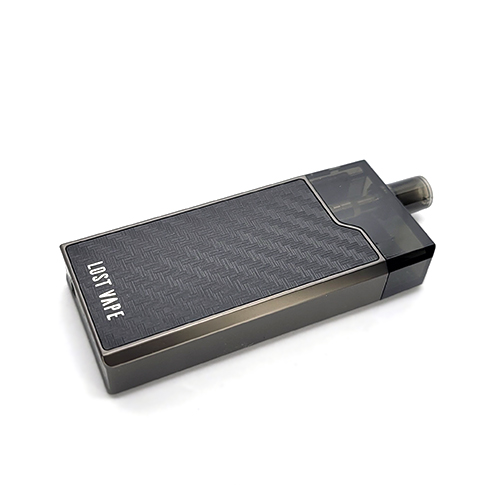 There is a lot to like about the Orion Mini, including the performance, but I did find some pitfalls. We’ll start off with the positives. For one, both coils handle all ratios of nicotine salt ejuice flawlessly. Whether 50/50 or 75VG, the coils did not have an issue wicking, nor did they ever give me a dry hit.

Another pro for this device is, as I mentioned before, the simplicity. It’s great that I can pick it up, press the fire button, and vape. Yes, there is the airflow to adjust, but that’s relatively minor. It’s just a great device for how simple it is to use.

There is a slight difference between the coils but it’s nothing drastic. The 0.8Ω coil will deliver a looser draw with warmer vapor, while the 1.0Ω coil delivers a slightly tighter draw with cooler vapor. The 0.8Ω coil also gives slightly better flavor but again, the difference is small. With the airflow open you will get a restricted DL draw which can go to a loose MTL draw and down to a tighter MTL draw by closing the airflow down.

The flavor from both coils is great but not game changing. It’s certainly respectable and enjoyable to vape on but I wouldn’t classify the Orion Mini as one of the best pod vapes for flavor. Could it still be one of the best pod vapes? Possibly, because flavor isn’t the only thing that makes a device great. All I’m saying is that there are better pod vapes out there for flavor.

One big con for me is that the device doesn’t stay in the green (3.9V+) power level for very long. Once you start vaping it quickly goes down to the blue power level and the draw gets noticeably weaker. For me, even with a 35mg nicotine salt ejuice, the draw felt a little underwhelming here. At full battery the draw is great, I just wish that the Orion Mini featured constant wattage output, even if it sacrificed a little battery life for it.

Another con is the coil life. This could just be the coils that I received, but the 0.8Ω coil burned out in less than a week. By the 5th day I could taste a burnt taste and the flavor really fell off. The 1.0Ω coil fared much better and has lasted for a week and a half now without a change in flavor or performance. Again, could just be the coil that I received but it’s a shame that it burned out so quickly.

In general, I really like the Orion Mini. There are so many great things going for this device that I want to just forget about the cons, but I’m reminded of them every time that the battery life reaches the blue charge level. It’s small, it has a nice design, it’s built well, it’s simple to use, the draw is nice (at full power), and the flavor is good. I generally like a hard draw, but maybe you’ll appreciate the way the Orion Mini hits.

It may not be the most flavorful pod vape out there, but the Orion Mini has a lot of other positive qualities. I can’t discount the whole device just for a few cons, but I suggest that you seriously consider these cons before you make your purchase.

Overall, the Orion Mini is a solid device from Lost Vape. Is it right for you though? Only you can decide that one. If you like a smoother, weaker draw and aren’t after the most amazing flavor ever, you will like the Orion Mini. Are you looking for a simple device that will allow you to vape when you press the button? The Orion Mini is a prime candidate. But if you want a hard draw and amazing flavor from an advanced device, you should probably pass.

Let me know your thoughts on the Orion Mini by leaving a comment down below.