SMOK Novo 4 Review: Should You Get The Newest Novo? 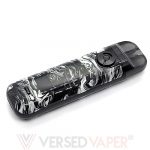 The Smok Novo 4 is the latest device in Smok’s popular Novo line of pod vapes. Just like Smok’s Nord devices, Novo devices have slowly been gaining new features with each new iteration.

So what does the Novo 4 bring to the table? Well, similar to the Nord 4, it now has an airflow control dial which makes it the first Novo device with adjustable airflow. It also has adjustable wattage up to 25W and an 800mAh battery that charges with a Type-C cable.

One big change from previous Novo devices is that instead of pods with the coils built in, the Novo 4 uses replaceable coils. Where the Nord 4 went in the direction of catering to direct lung vapers, the Novo 4 seems like a MTL oriented kit. 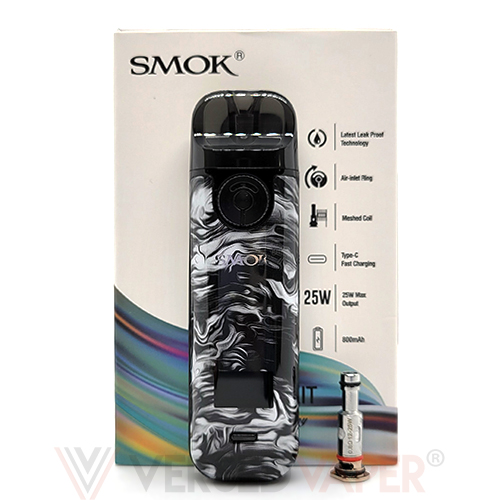 If you were expecting a radical redesign for the Novo 4 then you’re going to be disappointed. The Novo 4 looks virtually identical to previous Novo devices and retains the same shape and rounded edges.

It’s actually about the same size as the Novo X at 93.5mm x 26.5mm x 17.7mm and it weighs about the same too at 51.7g. It’s every bit as pocketable as other Novo’s and still light enough that it’s almost imperceptible that you’re carrying it.

The biggest and most noticeable design change is the addition of an airflow control dial just under where the pod sits. This dial is similar to the one on the Nord 4, but there are a few changes that make it more MTL oriented.

For one, the airflow slot is smaller. Secondly, there are airflow holes under the dial rather than the open slot on the Nord 4. This combination of airflow holes and a smaller airflow slot means that the Novo 4 draws less air and provides a much tighter draw than even previous Novo devices.

With the airflow open you get a tight MTL draw that is really nice at any wattage as it’s warm but not hot. Closing down the airflow makes the vapor much hotter and I found it most enjoyable to turn down the wattage when vaping with the airflow like this. No matter how you set it, if you’re a MTL vaper, you’re going to like the draw.

There are small notches along the side of the dial, as well as a notch that runs down the face of it, to aid in turning the dial. Still, it’s much too hard to adjust, especially when you first start using it. The dial loosen up a little bit with use, but not nearly enough. If you don’t have nails, good luck! Start growing them now!

There’s a small OLED screen located on the front panel and a small button just below it. This screen tells you your wattage, coil resistance, puff count, and battery life with percent.

Smok’s quality can be all over the place but the Novo 4 is very well built. If you’ve read my Novo X review, you’ll see that I had some issues with the panels creaking and moving slightly which was extremely disappointing. My Novo 4 has none of these issues and feels very solid and well made. 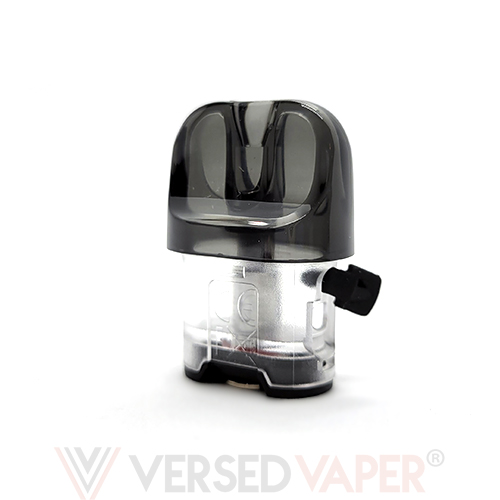 For the first time, a Novo device does not use replaceable pods with built in coils. Instead for the Novo 4 it uses a 2ml pod that takes removable and replaceable coils. In the box you get one LP1 0.8Ω mesh coil that is best at 12W and one 0.8Ω LP1 DC coil that is also rated for 12-25W.

The coils have 2 flat sides that match up with the bottom of the pod. This means that the coil only goes in a certain way so make sure that you insert it properly.

The pod that comes with the Novo 4 has a dark black tint on the mouthpiece and a light tint on the bottom half of the pod which makes it hard to see how much ejuice is left. Smok seems to be selling pods that are completely transparent, even the mouthpiece, but these are sold separately. It would have been nice if they just included one of each pod in the box, but I guess that’s too much to ask to solve an issue that vapers complain about all the time…

The pod clicks to seat into place in the battery, no magnets here. Even though the Novo 4 pod looks nearly identical to the pods for the Novo X, they are not interchangeable. The Novo X pod does not seat all the way into the Novo 4 battery and will not fire because the contact pins are on each end of the pod and not in the middle like the coil in the Novo 4 pod. The same goes for trying to fit the Novo 4 pod in the Novo X. It doesn’t work. 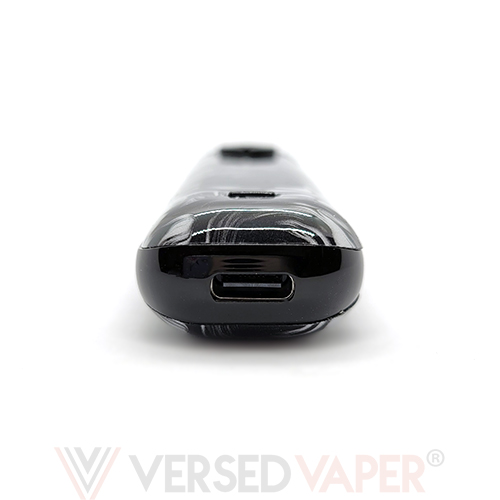 There’s no upgrade here — the Novo 4 packs the same 800mAh battery size as its predecessors. That’s not really a con though as I’ve found the battery life to be pretty good when vaping at 16W. I consistently get about 2 days of vaping from a single charge and, for the size and portability, that’s pretty good.

Thankfully Smok has finally realized it’s 2021 and the Novo 4 has Type-C charging. It charges in 90 minutes and does pass through charging so you can vape it while it charges. While plugged in the Novo 4 gives you the estimated charging time on the screen and shows you your current battery charge. It’s a really neat feature because it at least gives you an idea of how long it will take to charge. 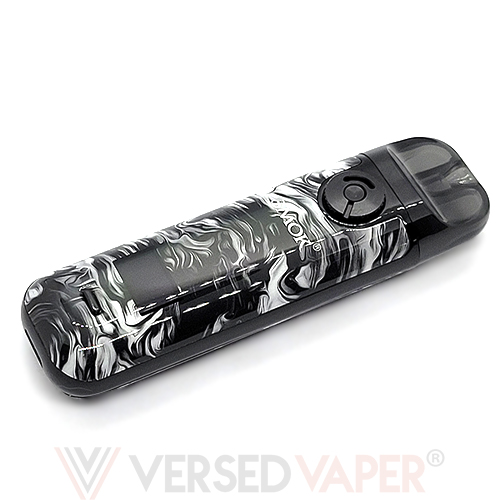 Novo devices have always been good MTL devices and the Novo 4 is no different. Judging from the latest iterations, it looks like Smok has designated the Nords as their DL pod vapes and the Novos as their MTL pod vapes. So if you’re a MTL vaper, you’ll want to be looking at the Novo 4.

The airflow is exactly what I’m looking for in a MTL pod vape. It’s a loose MTL draw when fully open but it can be turned down to a tight MTL draw by closing down the airflow dial. With some nicotine salts the draw is very, very good.

You can vape the included DC coil anywhere from 12-25W but I liked it the most at 16W. It’s a good wattage level that I found to bring out the flavor of my ejuices while still being warm and strong enough to enjoy. The LP1 mesh coil is similar to the DC coil and honestly, I didn’t notice a big difference between the two. This coil is only rated as being best at 12W, no wattage range, so I kept it around 12W to prevent burning out the coil. The flavor is slightly less intense than the DC coil, probably due to the lowest wattage, but if you like a cooler vape it’s not bad. The flavor from these coils is even better than previous Novo’s and those pods were already very good.

I mentioned earlier that I had no leaking but another important performance aspect for me is the draw activation performance. Thankfully I’ve had no issues, but faulty draw activation is something that can make a good device terrible in my eyes. The Novo 4 has well calibrated draw activation that works as it should; it isn’t difficult to activate and it doesn’t malfunction or fire by itself.

I didn’t think that the Novo X was worth upgrading for if you already owned the Novo 3, but the airflow adjustment on the Novo 4 does seem like it’s worth the upgrade. The Novo 4 gets you everything that was good on previous Novo devices (flavor, reliability, portability), but with the added ability of adjusting your draw to your liking. Mouth to lung vapers will like what it has to offer. Overall Smok did a good job with the Novo 4.