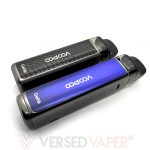 Voopoo’s Vinci pod mods are back. Today I have the new Vinci 2 and Vinci X 2 which are the second versions of the Vinci and Vinci X respectively.

They’re both very similar to one another in design and features, hence why I’ve decided to group them both into one review. The main difference between these two is the size, battery, and max output; the Vinci 2 is smaller, has a built in battery, and fires up to 50W. The Vinci X 2 is taller, takes an 18650 battery and fires up to 80W.

From a quick look over these new devices really don’t seem that much different from the originals that they’re replacing. Is there more than meets the eye? Yes! Voopoo has made a few changes to the new Vinci pod mods and I’ll go over them all in my review. Keep reading for the full run-down on the Vinci 2 and Vinci X 2.

These devices were sent to me directly from Voopoo for the purpose of this review.

Ah yes, good ol’ Vinci pod mods. I always knew that Voopoo would eventually release version 2 of these. But with the Drag S and Drag X being out, I’m not sure that V2 of the Vinci’s was really even necessary. The number one thought I had while using both of these was “These are just like the Drag S & Drag X”. In some ways these are better (larger pod capacity), in some ways they’re worse (smaller battery on the Vinci 2), but in most ways they’re very similar.

Starting off with the size, the Vinci 2 and Vinci X 2 are basically identical to their predecessors. The Vinci 2 is the more portable of the two with its dimensions of 106mm by 27mm, by 28mm. The Vinci X 2 is slightly taller at 121mm and is much more noticeable when in a pocket.

Both devices have a fair bit of weight to them but the Vinci X 2 is obviously heavier due to its increased size and the fact that it uses an 18650 battery. The battery inserts into the bottom of the Vinci X 2 by sliding the spring-loaded door to open it. With the battery inserted there is no battery rattle at all. 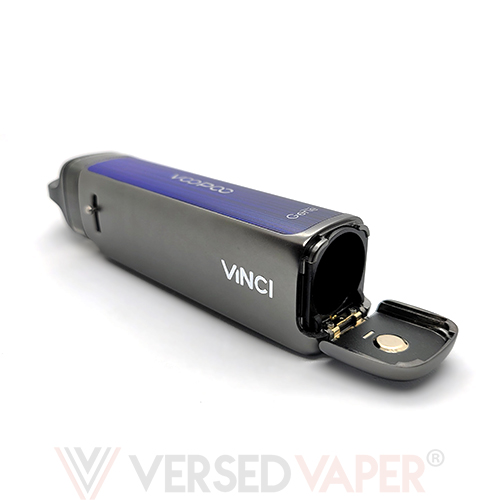 The Vinci 2 uses a built-in battery like the original Vinci, but it’s still just 1500mAh. This is rather small and goes back to my question of “is this device even necessary”. The Drag S has a 2600mAh battery and uses the same PnP coils, so why would you purchase the Vinci 2 instead?

With the design differences between the Vinci 2 and Vinci X 2 out of the way, I’ll move on to their similarities. Both have retained the boxy cube shape of their originals but the matte silver body and rounded edges give them a cleaner, more premium, and more modern look. Unfortunately, the paint has already started showing some scuffing and scratches, even with my careful use. Paint quality is definitely not Voopoo’s strong suit.

On one side there’s a silver Vinci logo that is glued on. How do I know that it’s glued on? Well, one day while driving I suddenly noticed a small silver V on my steering wheel. I was confused and wondered where it could have possibly come from. I continued to be confused until I looked at my Vinci X 2 and realized that the V had come off. Not good at all. The rest of the lettering is still on there firmly and the logo on my Vinci 2 hasn’t come off yet but who knows how long that will last. 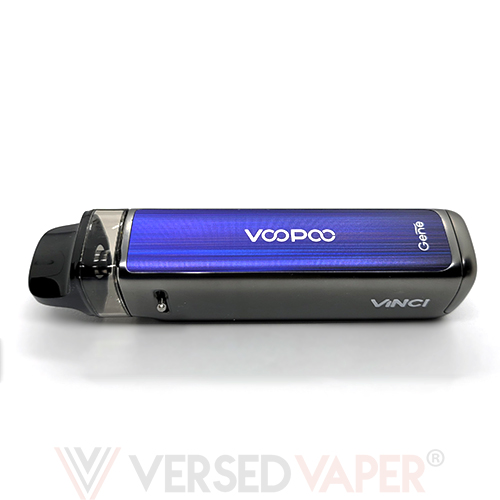 On the back of each of these is a panel that you can get in a bunch of different designs. My Vinci 2 has the Carbon Fiber panel and my Vinci X 2 has the Velvet Blue panel. They both look amazing but the Velvet Blue is just stunning. The vertical lines in the panel sort of ‘dance’ when the light hits and it just looks really cool. These panels are made of 3 layers: the top layer is oil, dust, and fingerprint proof, the second and third layers create the dazzling ‘dancing’ color effect.

A nice improvement from the original Vinci’s is the addition of an airflow control knob. Pushing the knob to the right opens the airflow and pushing it to the left closes it. There’s good resistance to adjusting the knob and it will stay wherever it is set.

The front of the devices feature a 1.08” TFT color screen with the same UI design as the Drag Max, Drag X Plus, and Drag 3. The UI is neat and shows a battery life icon, wattage, puff count, voltage, resistance, and puff time. The screen is bright, high definition, and clear. 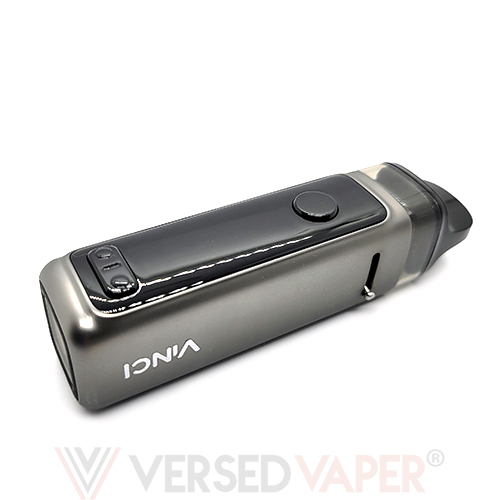 One design feature I don’t know if I love or hate is the rubber grip on the bottom of these. The intention is good, but instead of these devices sliding when knocked or pushed, the rubber makes them fall over. This is what happens with many other rubber coated devices though so I’m not going to count this as a con but I did want to mention it.

Both devices have a Type-C port that can be used for firmware updates or for charging. Both of these charge at 5V/2A which is great. However, I highly suggest charging your 18650 batteries with an external battery charger rather than in the Vinci X 2.

The design hasn’t changed much from the originals but the small refinements give these a cleaner look that I really dig. The overall fit of the parts and quality of the devices is good, but the paint scuffing and logo coming off are bad signs. These are small things but they make me question how long these devices will hold up with long term use. 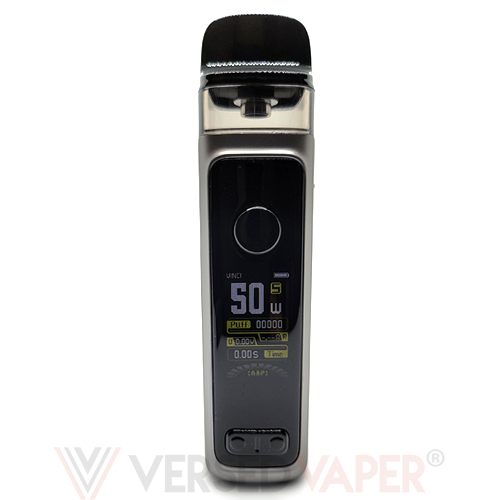 Both the Vinci 2 and Vinci X 2 are powered by the GENE AI 2.0 chipset. From what I can tell this chipset is very similar, if not identical, to the Gene.Fan 2.0 chipset in the Drag X Plus and Drag 3.

Holding both adjustment buttons will take you into a simple menu that lets you choose between smart mode or RBA mode. Smart mode is the default mode and it works great with Voopoo’s PnP coils. Smart mode will automatically set the wattage when you insert the pod to ensure that you don’t run the coil at too high of a wattage. For the same reason, it also limits how high you can raise the wattage for each coil.

RBA mode removes these limits and lets you set the wattage wherever you like. This is meant to be used with the PnP RBA coil but unfortunately I don’t have one on hand.

The menu also lets you choose between 2 UI’s: the default vertical UI and a horizontal UI. The horizontal UI is pretty busy and not to my liking but check it out and see what you think. 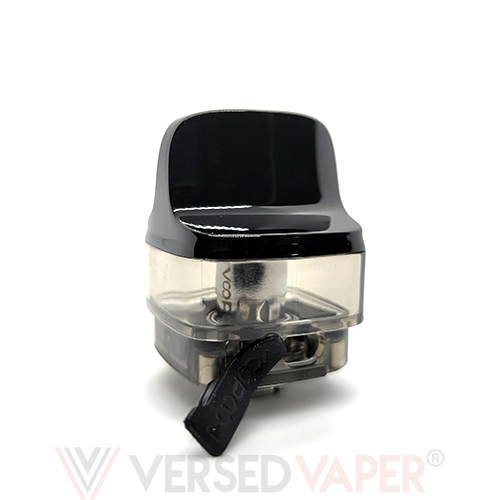 The pods hold 6.5ml of ejuice which is one of the largest capacities on a pod mod. That’s a ton of ejuice and more than enough to get you through the day, if not multiple days. The pods are clear and the contents sit completely above the battery so you can see the entire pod easily and at a glance. No need to remove the pod to check how much ejuice is left. Brilliant!

You will have to remove the pod to fill it up though. The fill port is on the side of the pods and plugged by a rubber fill plug. I had no issues filling the pods up with large 100ml bottle tips, although dropper bottles are a hassle.

Like all of Voopoo’s recent devices, these two are compatible with Voopoo’s vast PnP coil line up. They both come with a 0.3Ω PnP-VM1 coil. The Vinci X 2 comes with a 0.15Ω PnP-VM6 coil and the Vinci 2 comes with a 0.8Ω PnP-TM2 coil. The coils push into the bottom of the pod. 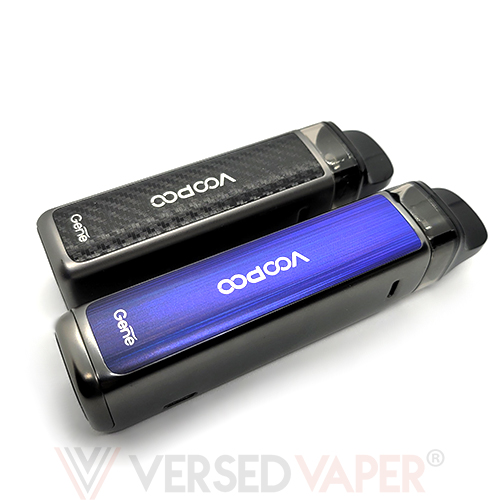 These are good looking pod mods and they perform just as good as they look. While the original Vinci and Vinci X had serious issues with leaking, I haven’t experienced anything more than condensation on these second generation units. If anything was going to be improved, I’m glad that this issue was addressed.

Firing speed is instant, as it should be, on both devices. They’ve both functioned perfectly while I’ve used them and I haven’t had any odd glitches or malfunctions. I’ve heard of “Check Atomizer” issues on the originals but thankfully I haven’t had any issues with that either.

The 0.3Ω VM1 coil is a good one. I used a 60VG ejuice with it and wicking is not an issue. Higher VG ejuices (80VG) do struggle a little so I wouldn’t chain vape with them, but anything lower is fine. This coil is rated for 32-40W and does best anywhere from 35-40W. Closing off the airflow slightly gets me a DL draw that is good on flavor and nicely warm. This coil comes with both the Vinci 2 and Vinci X 2.

The VM6 comes with the Vinci X 2 and for this coil I used a 70VG ejuice. This is a 0.15Ω coil rated at 60-80W and it’s a fantastic performer. Impressive flavor and pleasantly warm vapor are the highlights of this coil when vaped at 65W with the airflow wide open. The draw only gets hotter as you increase the wattage or close the airflow so I suggest playing around with both until you get a vape that you like.

The TM2 coil comes with the Vinci 2. It’s a 0.8Ω MTL coil with a range of 12-18W. This coil is suggested to be used with a 35mg ejuice or lower. 35mg is what I vape with my MTL setups so it worked out perfectly. I liked this coil at 15 or 16W with the airflow fully closed or close to fully closed. The MTL draw is perfect like this; tight, smooth, and good flavor.

Right out of the box the Vinci 2 is capable of MTL or DL and the Vinci X 2 of DL only. But you have the option of using any of the many other PnP coils. You have to be careful with the Vinci 2 though because you will only be able to use coils with a wattage range lower than 50W. That’s still plenty of options and a good selling point for these devices.

The look, design, and performance of the Vinci 2 and Vinci X 2 is firmly better than the previous generation. However, I have to go back to my question from the beginning of this review; are these really even necessary when Voopoo sells the Drag S and Drag X already?

I’ll answer that question now — no, they aren’t necessary. The 6.5ml pod is nice but with that being the only improvement over the Drag and Drag X, these devices are a bit redundant.

That being said, aside from the minor design flaws like the paint and logo coming off, these are still excellent devices. If you don’t like the look of the Drags, or if you’re just in the market for a new pod mod, the Vinci X 2 is a good pick up. I’m having a hard time recommending the Vinci 2 because of it’s 1500mAh battery though and would recommend grabbing the 2600mAh Drag S instead if you want a built-in battery.