Geekvape Aegis Max Kit Review: Is This The Aegis To Get? 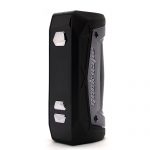 Geekvape are best known for their ‘Aegis’ line of waterproof, dustproof and ultra-durable box mods. They’ve practically got a mod for everyone; there’s the dual 18650 battery Aegis Legend & Aegis X, the built-in battery Aegis Mini, the single 18650 battery Aegis Solo, and the Aegis Squonk mod. They even make pod systems like the Aegis Pod and Aegis Boost!

For vapers seeking a single 21700/20700 Aegis, Geekvape have just released the latest addition to the Aegis family: the Aegis Max.

The Aegis Max takes a single 21700, 20700 or 18650 battery and features a maximum output of 100W. It has an IP67 water and dust resistance rating, as well as military grade shock resistance.

The Aegis Max kit comes with the Geekvape Zeus sub-ohm tank. This tank has been out for a while now but it’s still a top performer. The Zeus sub-ohm tank has a 26mm base diameter, a 5ml ejuice capacity. It also has top slotted airflow that basically eliminates the chance of leaking.

When I saw that Geekvape was releasing yet another Aegis mod, I couldn’t help but think “Do we really need another Aegis?”

Well, I’ve been using the Aegis Max for a few weeks now and I think that I have the answer. Read on for my full thoughts on the Aegis Max Kit!

This kit was sent to me from Heaven Gifts for the purpose of this review. 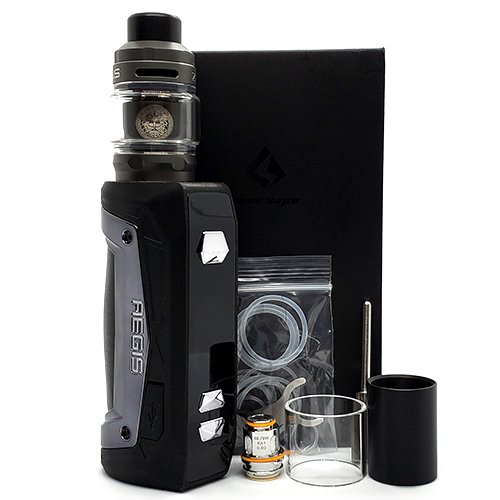 This might not seem like a big difference on paper but when you hold these two mods in your hands it’s a different story; the Aegis Max feels much larger and much more robust than the Aegis Solo. The size means that the Aegis Max is not as pocketable or portable as the Solo. However, it’s still a relatively lightweight mod.

The design of the Aegis Max stays true to the rest of the Aegis line. I’m glad that Geekvape didn’t totally reinvent the design and stuck with what works. One look at the Aegis Max and you know that it’s an Aegis. It looks rugged and tactical, but stylish at the same time. It has a rubberized outer body, along with the signature Aegis skeletal metal frame that surrounds the leather grip.

Not everything is the same, though. There are some subtle design additions on the Aegis Max when compared with previous Aegis models. One such addition is a geometric, triangular pattern in the rubber that surrounds the skeletal metal frame. Another is that ‘GEEK VAPE’ is engraved on one side of the metal frame, and ‘AEGIS’ on the other side. These changes make the Aegis Max look more refined than previous models.

The large 510 connector plate on the Aegis Max can hold tanks up to 30mm without overhang. The 510 pin is gold-plated and spring-loaded. The 510 plate is flush with the top of the mod and all of my tanks sit flush with no gap.

The battery cap has a small handle that pops out. Due to the IP67 water and dust proofing, the cap is pretty tight. If you find it too difficult to remove or tighten, Geekvape includes a metal rod that you can slide through the handle to make it easier. There’s also a slot on the cap for a flathead screwdriver, just in case the cap is seized up.

While I never charge my batteries in a mod, there’s a USB port on the Aegis Max that can be used for charging if you’re in desperate need of a recharge. It’s nestled under a deep rubber plug, which is necessary for the IP67 water and dust resistance, but you might have trouble reaching the port if you use a thicker micro-USB cable.

The Aegis Solo will take a 21700 or 20700 battery, or an 18650 battery with the included adapter. I had no trouble getting my battery in or out. The compartment is snug but not so tight that it will damage battery wraps.

As far as the IP67 rating is concerned, the Aegis Max is just like other Aegis mods and passes testing with flying colors. I’ve tossed it around, dropped it from varying heights, and generally been rough with it. Apart from some scuffs and scratches to the screen and metal, and a few chunks missing from the rubber, my Aegis Max looks and functions just fine. I even dropped it in a bucket of water for 25 minutes, battery and all, and it’s still vaping like nothing ever happened.

Not surprisingly, the Aegis Max nicely lives up to the reputation of previous Aegis devices. It’s solid, nicely built, and has a quality feel to it. 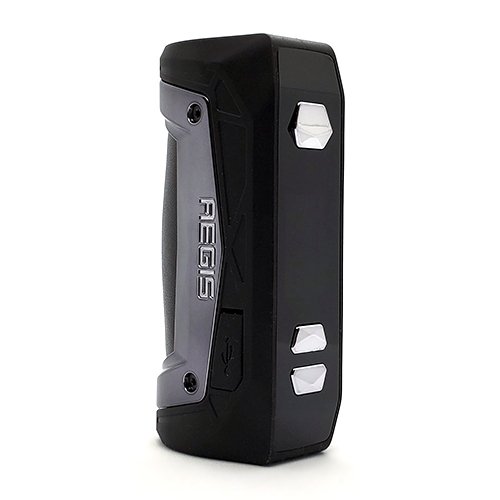 The Aegis Max uses Geekvape’s AS-100 chip, which is the same chip as the Aegis Solo. It has all the modes I’ve come to expect from an Aegis device, which include Power, Bypass, Temperature Control, TCR, and VPC modes. The Aegis Max can fire at up to 100W.

The UI is the same as the Aegis Solo. It displays your mode and wattage at the top of the screen , followed by a battery life indicator, coil resistance, amperage, voltage, and a puff counter.

The Aegis Max scrolls in 0.1W increments which is a bit frustrating. You can hold the adjustment buttons to scroll by full watts but it scrolls much too fast. It can be hard to get your desired wattage by holding the adjustment button. Most of the time I scrolled until I was close, and then adjusted in 0.1W increments to my desired wattage. Not the most optimal way to do it but it gets the job done.

The Zeus sub-ohm tank has been around for a while, but it’s still a great performing sub ohm tank. This is the same tank that comes with the Aegis X Zeus kit. It looks a lot like the Zeus X RTA but takes premade coils. You get a 5ml bubble glass, as well as a 3.5ml straight glass in the box.

The Zeus is a top airflow tank which greatly reduces the chances of it leaking. In fact, I haven’t had it leak at all during the entire time I’ve been using it with this tank. I’ve even used it before in the past and never had any leaking issues. This top airflow funnels air down through the chimney and to the coil, and although top airflow tanks aren’t known for their flavor, the Zeus is quite a flavorful tank.

It has an 810 drip tip with rounded edges for added lip comfort. The top cap unscrews with a quarter turn to reveal two large, kidney shaped fill ports. These ports are recessed inside the top cap, so even if you don’t get the ejuice directly in the hole, it doesn’t come spilling back out.

The coils for the Zeus are easy to install; they just push into the bottom of the tank. Two coils come with the Zeus:

As a whole, this kit is super. The Aegis Max fires as soon as I press the fire button. It’s feature packed and, aside from the annoying wattage scrolling, it’s pretty easy to use. Paired with the Zeus sub ohm tank, this is a kit that delivers in the performance and flavor departments.

Both of these coils perform nearly the same, just with slight difference in their best wattage. Starting with the Z2 coil, which is rated for 70-80W, flavor is very nice at 75W. I get very good warmth from the vapor and it’s not too strong or hot at all. I’ve been using 80VG ejuices almost exclusively lately and this coil had no trouble keeping up with wicking.

The Z1 coil performs nearly the same as the Z2. This coil is rated between 60-70W. I get great flavor and the best warmth at 70W but anything above 60W is very nice. Again, no problems with wicking 80VG ejuices even when I chain-vaped like a mad woman.

For being a top airflow tank, the Zeus and its coils aren’t too bad at all.

The Aegis Max performs good in wattage mode, but that’s almost a given for any box mod. I mean really, if a box mod doesn’t work properly in wattage mode then why is it even on the market? What I was really curious about is its TC performance.

For my TC testing, I used the SS316L coil that comes with the OFRF NexMesh sub ohm tank. In SS mode, the Aegis Max does well at around 450°F and gives a nice warm draw that is just to my taste. The TCR value for SS is a little off so I had to go about 30°F higher than I normally would with any other TC mod. Manually inputting the value in TCR corrects this and allows me to vape at 420°F like I normally would with SS316L.

The TC mode is a little off, but it’s consistent and works well. You’ll just have to bump the temperature up a bit from your normal go-to temperature if you use SS316L.

The Aegis Max is a nice addition to the Aegis line of mods. It’s the single 21700 mod that I’ve been waiting for; beautiful, durable, and a good performer in wattage or TC mode.

The Aegis Max is super similar to previous Aegis mods so if you don’t particularly care about using a 21700 battery, then this might not be worth the purchase. But if you’ve been looking for a good 21700 mod, the Aegis Max is a perfect choice. If you don’t have the Zeus tank or if this is going to be your first mod/tank, the kit is also worth the money.

Do you have the Aegis Max or Zeus tank? Leave a comment with your thoughts!