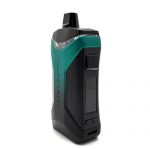 Vaporesso has been releasing new devices non-stop this year. One of these new devices is the Xiron. It’s a 50W pod vape that can be used for either mouth to lung or direct lung vaping. It uses Vaporesso’s GTX line of coils so whether you want to use regular nic ejuices or nicotine salts, there are plenty of options.

Vaporesso have a proven track record with their devices. The recently released Luxe PM40 and XROS are two of the best pod vapes that we’ve tried this year — they’re especially good for vaping nicotine salts.

Vaporesso’s mods in 2020 have also been stellar. The Vaporesso Gen S kit and Gen Nano kit both proved to be exceedingly good and reliable. It’s safe to say that it’s been a good year for Vaporesso.

Does the Xiron live up to the high expectations that Vaporeso have set for themselves? 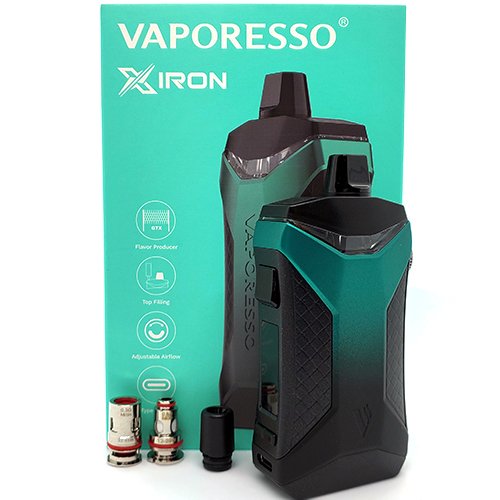 The Xiron is a nice looking device with a bit of a different design than other pod vapes. For the most part it’s rectangular, but it has slanted edges that give it a unique shape. It’s average height and thickness for a pod device but it has the width of a single battery box mod. The Xiron has a nice and compact shape and it’s easily pocketable but it’s not as ultra-portable as the Caliburn or XROS.

The Xiron comes in five color options. Three of the colors fade to black towards the bottom of the device and two colors are solid. The three fade colors are green, red, and blue. The two solid color options are silver and black. Regardless of which color you pick, the main frame of the device is black. The skeletal frame that is almost in the shape of an “X” is what your color choice applies to.

Similar to the Vaporesso Gen & Gen Nano, the Xiron has a soft-touch rubber coating. This helps a little with gripping the device but it mostly just feels nice. Branding is subtle on the Xiron, with Vaporesso on one side of the device and a Vaporesso logo on the other. Enough to let you know what brand of device you have but not too in-your-face.

The 0.69” black and white OLED display is okay but it’s much too dim. There’s no way to adjust the brightness either so the dim display is what you get. Other than the low brightness I don’t mind it though. 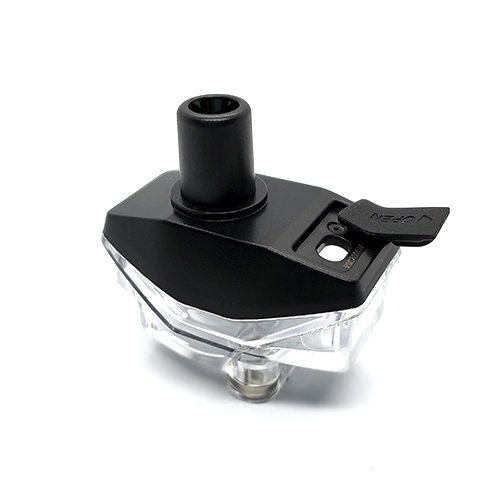 The pod attaches magnetically and only goes in one way. The magnets are strong and the pod doesn’t move or wiggle when it’s inserted. This pod can hold up to 5.5ml of eliquid.

Just below the pod on the side opposite the screen is an airflow adjustment dial. This dial spins around to open or close the airflow. The dial is very stiff when you first start using the device and for the first week it was difficult to use. But after a week it loosened up and became much easier to turn. Still, it’s not my favorite method for adjusting airflow and I would have liked to see a slider instead.

How to Use the Vaporesso Xiron 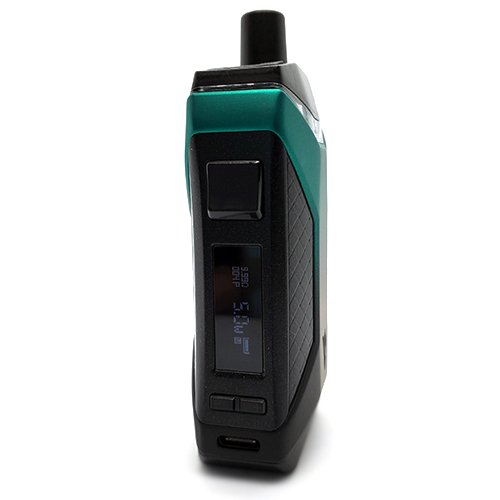 The Xiron has a few modes but it isn’t a complicated device to use. As with most vape mods, five clicks on the fire button will turn the device on or off.

The Xiron can fire at up to 50W and the wattage is adjusted using the adjustment buttons located below the screen.

Holding both adjustment buttons takes you into the mode menu. In this menu you can turn “Smart VW” on or off. This automatically sets the appropriate wattage for your coil when you insert the pod. Then there’s VW for variable wattage mode and VV for variable voltage mode. The last options lets you reset the device to default settings. 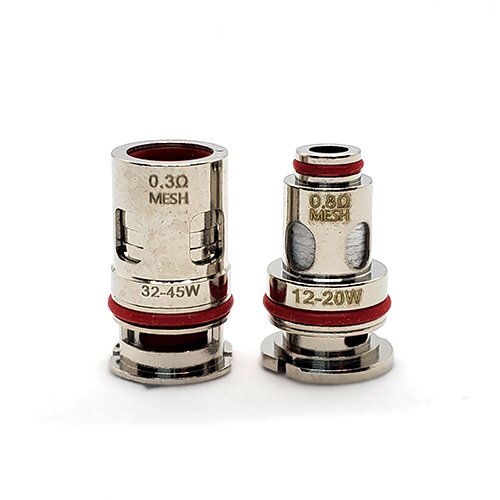 Vaporesso has been standardizing their recent devices to all use their GTX coils and the Xiron is no exception. Thankfully, Vaporesso’s GTX coils are quite robust and there are a number of options to choose from, depending on what type of eliquid you’re using and how you like to vape. In total there are 6 GTX coils that can be used with the Xiron, including an RBA coil.

Because the Xiron has an airflow adjustment dial, this opens up the options for vaping with these coils. The 0.8ohm coil is described as a restricted DTL coil, but by closing down the airflow you can achieve a decent MTL vape with it. Similarly, the 0.3ohm coil is described as a DTL coil but you can close down the airflow to achieve a restricted DTL vape with it.

The coils for the Xiron are plug and play and push into the bottom of the pod. 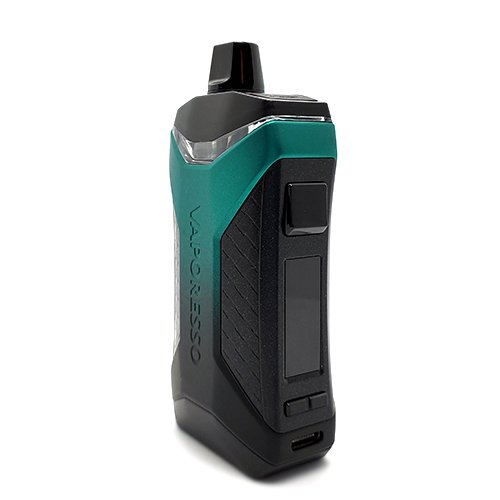 The Xiron is a compact device but it’s wider than other pod vapes. You might think that all that extra width is packing a huge battery but unfortunately it’s not. The Xiron has a decent 1500mAh battery built-in but this is not as big as I was expecting.

So usage times are okay but charging time is not too bad. The Xiron has a Type-C charging port located just under the adjustment buttons. I usually charged the Xiron before it was completely dead and it took around 30 minutes to get back up to full. When it was dead-dead it still wasn’t too bad and took around 50 minutes to an hour. 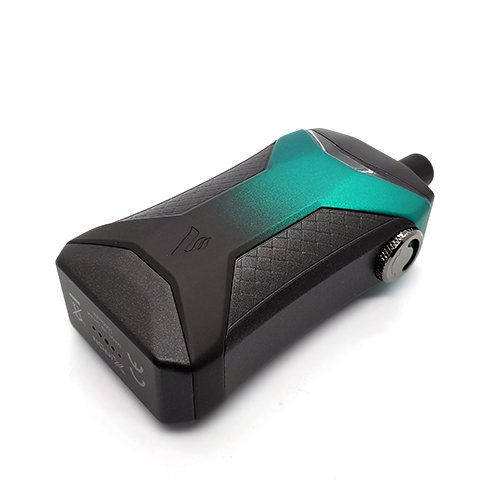 In my time of using the Xiron, what I really noticed about it is its versatility. Most pod vapes are usually good for one ejuice and one type of vaping. Some are good for nic salts and MTL, others are good for regular ejuices and DTL.

You usually can’t have both from one device. But the Xiron does both MTL and DTL pretty well. Now I wouldn’t say that it’s amazing at doing either but it’s more than good enough that you can really enjoy however you want to vape.

The 0.8ohm GTX coil is wonderful for nicotine salts and MTL. You have to cut down the airflow close to all the way to get a MTL vape but it’s nice. If you close down the airflow completely you can get a decently tight MTL vape too. The warmth of the vapor is just fine at 18W as is the flavor. I used the narrow bore drip tip while I used this coil.

For DTL vapers and restricted DTL vapers the 0.3ohm coil is a fine coil. Leaving the airflow open allows an airy DTL vape but closing it down allows you to get a restricted lung hit. Regular ejuices are the way to go with this coil, if not the only way to use it. The vapor is warm at 40W and the flavor is even better than the 0.8ohm GTX coil.

The only performance issue that came up with the Xiron is a bit of leaking with 50/50 ejuices. Ejuice pools under the pod when using thin ejuices like this. 60VG still leaked but not as much. 70VG ejuices barely leaked at all and looked more like light condensation.

Aside from the leaking, the Xiron worked flawlessly and reliably during the time that I was reviewing it.

If you like to go between MTL and DTL vaping or like to switch between regular nic and nic salt ejuices, the Xiron is a wonderful vape. Beginner vapers will also benefit from this versatility as they can use the Xiron to discover how they truly like to vape. The compatibility with GTX coils further opens up the options for using the Xiron. The simple operation and ease of use will also be appealing to new vapers.

If you can get past the dim display and awkward airflow dial, the Xiron is a sturdy little vape. But make sure that you use 60VG ejuices or higher or you’re going to run into a bit of leaking.