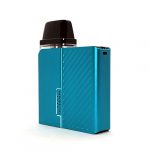 Vaporesso’s “XROS” line of products are the brand’s designated pod devices. Currently, there are quite a few of them, and it seems like the lineup is only going to grow larger. First, we had the original XROS, then came the XROS mini, and finally the XROS 2. Recently, another member has joined the family and this time it’s called the XROS Nano.

What’s different about this XROS device? For one, the XROS Nano features a different design and form factor from previous XROS devices. But the biggest differentiating feature is that, like Vaporesso’s GEN vape mods, the XROS Nano uses ‘Pulse Mode’. This mode pulses the wattage extremely quickly while you draw (quicker than you can perceive), and Vaporesso says that this will deliver “consistent & great flavor till the last puff”.

The XROS Nano has a 2ml pod and it’s compatible with all of the pods from previous XROS devices. It has a 1000mAh battery and recharges through a Type-C charging port. Two pods come included with the kit, a 0.8Ω mesh pod and a 1.2Ω pod.

Does Pulse Mode make a difference? Is the XROS Nano the XROS device to get? Is it better than other pod vapes out there? Let’s find out. 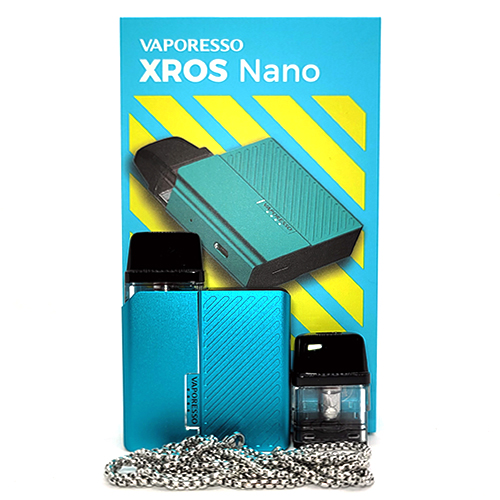 If you’re familiar with pod vapes then you’ll notice that the XROS Nano is shaped a lot like another popular pod vape out there — the Drag Nano 2. It could just be a coincidence, after all it is just a square, but it’s odd that these two ‘Nano’ devices are shaped the same. The XROS Nano even has a corner cut where the pod is, but in this case it allows you to check on your remaining ejuice more easily, without having to remove the pod.

There are 6 colors available and all of them are finished in a matte metallic paint. They all have a sort of luster about them in the light which looks good. The color options are silver, space grey, black, green, yellow, and pink.

The XROS Nano is small, slim, and light. Including the pod, it’s 63.1mm tall, 14.9mm wide, and 48.8mm deep. Very portable and convenient to slip into a pocket or bag. Interestingly, the half of the device that holds the pod is slightly thicker than the other half, but this is barely noticeable.

The half that holds the pod is flat and smooth, while the other half features thick diagonal lines that liven up the appearance. These lines also add quite a lot of grip to what would otherwise be a slippery device.

Separating the two halves is a silver accent line that runs on both sides of the device. It actually goes around the VAPORESSO logo and LED battery indicator lights on the front and looks kind of sophisticated. For me, it’s the small touches that make a device look good, not overly aggressive and ‘loud’ designs. I think Vaporesso has pulled off a clean, minimalist design with the XROS Nano and it looks really good.

On top is the pod connection and beside that is a black, carbon-fiber patterned square. This looks out of place to me and I’m not sure why this isn’t the same color as the rest of the body, but it’s there. On this corner there’s an anchor spot for the chain, which comes included in the package. It’s a silver chain and it’s easy to attach or remove it from the device. The XROS Nano is light so I found it to be no problem to wear it around my neck for the whole day. Sometimes I would forget that it’s there and start looking around my desk for it.

On the side of the XROS Nano is an airflow adjustment slider. This slider has enough resistance that it will not move too easily, but it will also stay where you set it to. The airflow hole is shaped like an upside down teardrop, so the draw gets exponentially tighter as you close the airflow down. Depending on which pod you use and how you set the airflow, you can achieve anywhere from a loose MTL draw to a very, very tight MTL draw.

The build quality of the XROS Nano is very good. The edges are cleanly cut, the paint is holding up, and the machining on the accents is perfect. I can’t say anything bad about the build quality. Vaporesso has done a good job. 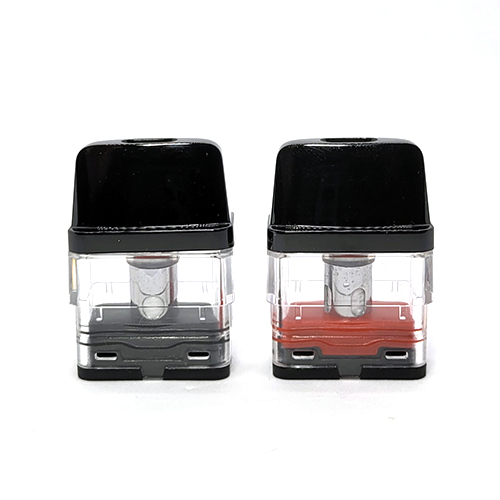 The pod attaches magnetically to the XROS Nano and sits firmly with no wiggle. A nice touch is that the LED indicator lights will sequentially light up from bottom to top when you remove the pod, and from top to bottom when you insert the pod, following the motion of the pod.

These pods are great because they are completely clear with no tint on them whatsoever. They also sit in a way that leaves the contents completely visible from the side of the XROS Nano, without having to remove them from the device. If you want to check your ejuice, a quick glance is all you need to know where you’re at.

The mouthpiece is slightly rounded and comfortable to use. The mouthpiece also serves as a cap that gives you access to the fill port. Taking off the cap can be a minor annoyance because there’s nowhere to grip to remove it, but I found pushing it off front to back made it easier to get off. 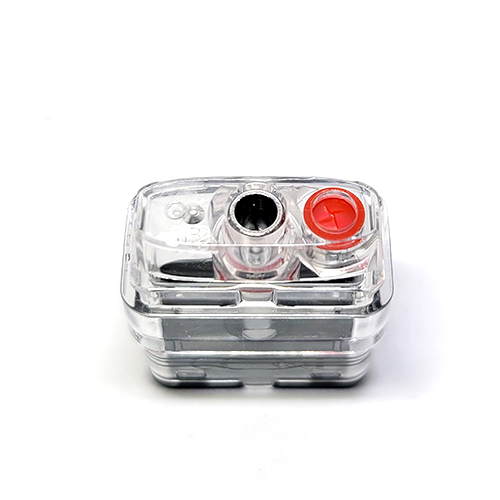 The fill port is like a lot of VAPORESSO’s other recent devices. It’s a hole with a self-closing membrane that opens up when you insert your bottle tip. When you remove the bottle it self closes. It works really well and has not leaked on me at all. 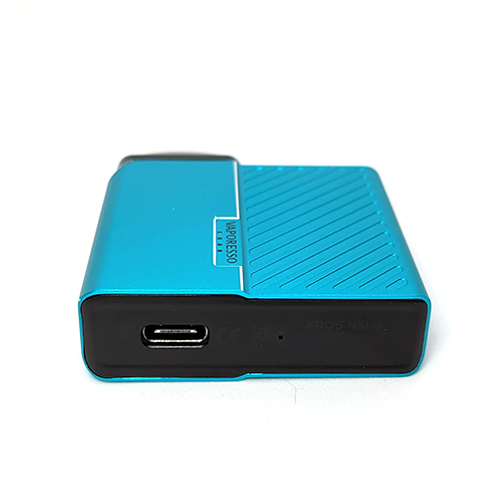 Like the XROS 2 and XROS Mini, the XROS Nano has a 1000mAh battery. Also like the XROS 2, the battery life indicator consists of 4 LEDs which are stacked vertically. Whenever you take a draw, the LED’s light up to indicate your charge level:

Battery life is good on the XROS Nano and similar to the XROS 2. You can vape around 2 pods of ejuice per charge, so somewhere around a day or two depending on how much you vape. If you don’t vape very much then I could see a charge lasting even longer.

The XROS Nano recharges very quickly thanks to its use of Type-C charging. The port is located on the bottom of the device so you have to lay it on it’s side to charge. It takes approximately 45-55 minutes to recharge from a completely dead battery, however it does have pass-thru charging so you can vape on it while it charges. 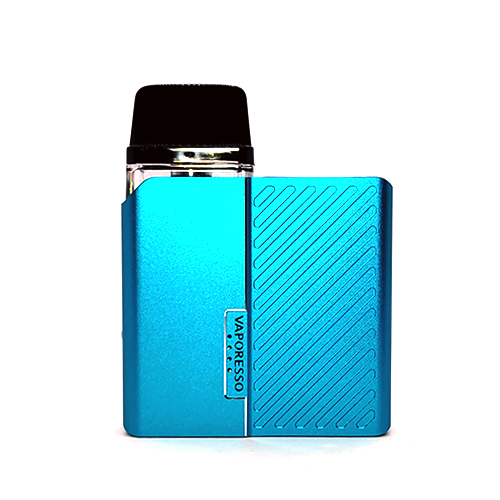 When I reviewed the XROS 2, I noted that I didn’t find that it performed much differently from the XROS Mini or the original XROS. Well, once again, I did not find that the XROS Nano performed much differently from the other XROS devices. It makes sense too; they do all use the same pods after all. The fact that the XROS Nano performs similarly isn’t a bad thing, seeing as all of the previous XROS devices scored really well for performance and flavor. But I am a little disappointed, only because of the addition of ‘Pulse Mode’, which really didn’t make a difference.

Here is my rundown of the performance, starting with the 1.2Ω pod. From this pod, the flavor is impressive. With the airflow open it delivers a very tight MTL draw, even tighter than previous XROS devices. Closing it off anymore makes the draw very, very tight; more than I prefer. The draw is warm and flavorful and I enjoyed it most with the airflow wide open.

The 0.8Ω pod delivers a loose MTL vape that is warm and even more flavorful than the 1.2Ω pod. Closing down the airflow with this pod makes it even more enjoyable as I can get the draw to just where I like it. The vapor also gets a little warmer, too. Out of the two pods, I preferred this one the most with the XROS Nano.

A standout quality of these pods is that they last a long time. You can refill each of these pods more than 20 times and they’ll still be vaping like they did when you first started using them. I also used a variety of PG/VG ratio ejuices and nicotine salts that ranged from 24mg to 36mg with these pods and I did not have any leaking or wicking issues.

Like other XROS devices, the XROS Nano is a great pod vape. I like the form factor and design and the flavor and draw are both excellent. However, it’s like a reskinned XROS 2 because the performance is basically identical. I’m disappointed that pulse mode did not seem to make a difference at all to the vaping experience but regardless, it’s still a great performer and definitely worth picking up if you don’t already own one of the XROS devices.

Compared with other pod vapes, the XROS Nano holds its own and is certainly among the best of them. If you want a good MTL vape with great flavor and no performance issues, I recommend checking it out.