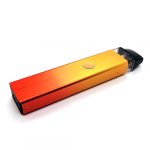 The XROS 2 is the latest iteration of the VAPORESSO XROS that I reviewed in mid-2020. Once again, this is a MTL pod vape that is designed to be used with nicotine salt ejuices. It has a 1000mAh battery, draw and button activated firing and an adjustable airflow slider. The XROS 2 comes with two pods that each have a 2ml ejuice capacity.

At first glance, the XROS 2 doesn’t seem to be much different from the XROS. However, a closer inspection reveals a few minor changes that do make a positive difference. I’ll be going over all of these changes and give you the full rundown on the VAPORESSO XROS 2.

The original XROS is a device that closely competed and (in my opinion) beat out the Caliburn with its performance. Can the XROS 2 do the same against the Caliburn G? 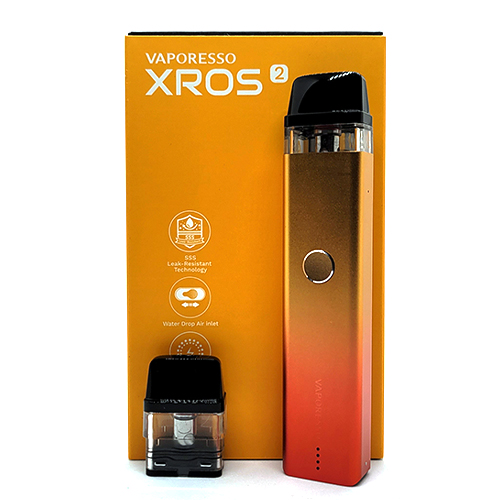 The overall design of the XROS 2 hasn’t changed much from the original. It’s still 112mm tall, 23mm wide, and 13mm thick. For a comparison, this makes it slightly taller than the Caliburn G but about the same width and thickness. It’s a very portable size that is easy to pocket, lightweight, and compact.

The shell of the XROS 2 is made out of stainless steel which is durable and corrosion resistant. My XROS 2 review unit is finished in a space grey satin finish that looks good and suits the device.

The paint has held up well and hasn’t chipped off or worn out even with my heavy use and going in and out of pockets, bags, and the cupholders in my car. I’ve even dropped it and aside from some minor scraping at the bottom of the device where it landed, it still looks as good as new.

Here is where we get into the changes from the original. The fire button is a similar round button but it’s now concave and protrudes a little less from the body. The button is finished in the same space grey color as the rest of the device but with a silver ring along the outside edge of the button. It’s firm, feels good, and it’s very responsive. You can use this button to vape, or you can just draw on the mouthpiece because the XROS 2 has both draw and button activated firing.

On the back side of the XROS 2 you’ll find an airflow adjustment slider. This has also been slightly revised from the original. The knob sticks out a little bit to make it easy to adjust and there is a single teardrop shaped opening for airflow. This slider has a perfect amount of resistance where it’s easy to adjust, but it won’t accidentally move from where you set it. The airflow slots feed into the bottom of the pod.

Depending on the pod that you use, you can achieve anywhere from a loose MTL draw to a very tight and restricted MTL draw.

The pod is pretty quite standard for a pod device. It attaches magnetically to the device and it’s a snug fit. The magnets are strong and hold the pod in place securely. There’s a little bit of wiggle with the pod inserted but it’s very minor and only happens if you try and wiggle the pod.

Although the design hasn’t changed much, I like the small revisions that VAPORESSO has implemented here. The XROS 2 is a nice and well made device that really doesn’t leave anything to complain about. 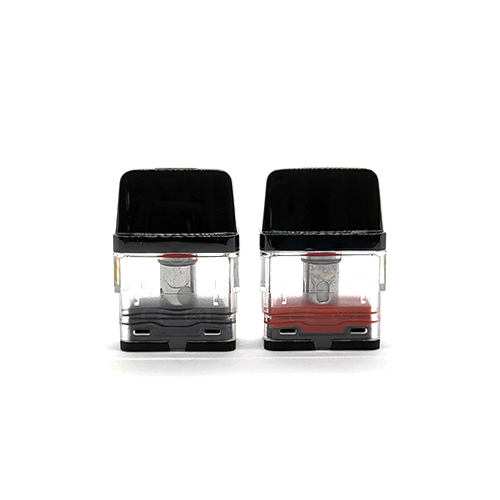 These pods are great because they are completely clear with no tint on them whatsoever. They also sit in a way that leaves the contents completely visible without having to remove them from the device. If you want to check your ejuice, a quick glance is all you need to know where you’re at.

The mouthpiece is slightly rounded and comfortable to use. The mouthpiece also serves as a cap that gives you access to the fill port. Taking off the cap can be a minor annoyance because there’s nowhere to grip to remove it, but I found pushing it off front to back made it easier to get off.

The fill port is like a lot of VAPORESSO’s other recent devices. It’s a hole with a self-closing membrane that opens up when you insert your bottle tip. When you remove the bottle it self closes. It works really well and has not leaked on me at all. 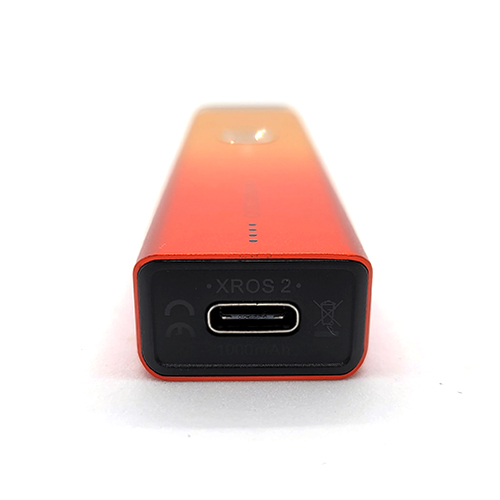 The battery on the XROS 2 has been improved and now holds a 1000mAh battery, up from the 800mAh battery of the original. As I mentioned earlier, the battery life indicator consists of 4 LEDs. Whenever you take a draw the LEDs light up to indicate your charge level:

Battery life is good on the XROS 2. I get to vape 2 pods of ejuice per charge which is somewhere around a day and a half to two days of usage time. I vape heavily though so if you don’t vape like I do then you could see longer battery life of a couple of days per charge.

The XROS 2 recharges through a Type-C port on the bottom of the device. Charging takes just around 50 minutes to go from dead to fully charged. It also has pass-thru charging so it can be vaped on while it charges. 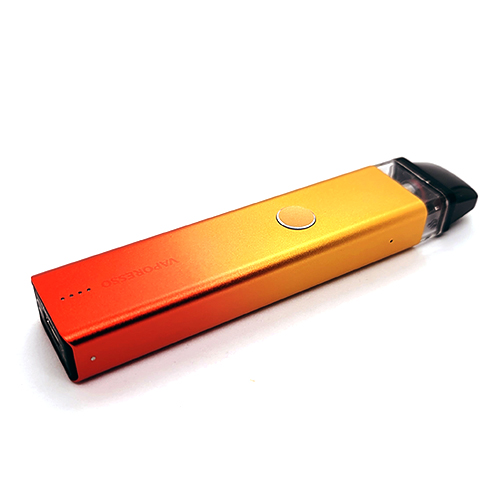 When it comes to performance, the short and sweet of it is that I didn’t find the XROS 2 to perform that much differently from the XROS MINI or original XROS. But that’s not a bad thing; both of those devices scored top points for their performance and flavor. Here’s the rundown.

The 1.2Ω pod is a newly updated pod that was first released with the XROS MINI. It’s a simple round wire build but the flavor is impressive. With the airflow closed off it’s a very tight mouth to lung draw. A little tighter than I usually prefer but it’s good. This pod fires at 11W and delivers warm, almost hot vapor. Vaping on this pod with the airflow halfway closed is where I liked it the best.

The 0.8Ω pod delivers a looser draw but it’s still a MTL vape. It’s warm with the airflow open but the vapor gets warmer and the draw gets tighter as you close off the airflow. Of the two pods, the 0.8Ω is my preferred one to use. Flavor is excellent and really makes my ejuices come through fully. This pod fires at 16W. Vaping this pod with the airflow ¾ of the way closed is the way to go.

One standout quality of these pods is their longevity. I refilled each of these more than 20 times and they’re still vaping as they did when I first started using them. There’s no noticeably drop off in flavor or vapor quality and that is extremely impressive. You don’t find many pods like this.

I used a few different ratios and strengths of nicotine salt ejuices that varied from 24mg to 36mg, and from 40 to 50VG. Neither pod leaked at all and I didn’t have any other issues either.

The XROS 2 is a superb pod vape that really delivers on what a pod vape should be like. The flavor is excellent and the draw can be adjusted to be just right. Like the original XROS, I think that this is one of the best pod vapes that I’ve tried and it is definitely worth picking up. However, if you already have the original XROS then it’s not much of an upgrade. Sure, there are a few small changes, but nothing that completely changes the experience.

If you don’t own the original XROS then there’s no question about it, you should pick up the XROS 2. You get a great MTL vape with excellent flavor and no performance issues to speak of.