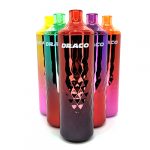 Well, if ejuice size is how you measure the worth of a disposable then boy do I have news for you. There’s a new disposable vape in town and it comes with the largest amount of ejuice that I have ever seen. It’s appropriately named too; meet the VaporLax Draco.

The Draco is made by VaporLax, the company who also produces the VaporLax and Sirius disposables, so there’s a good company behind this latest behemoth of a disposable vape. I for one don’t think that a massive amount of ejuice alone makes a disposable good. There are other factors involved like the draw and the flavors and i’ll get into all the details in this review.

When I say that the Draco is a behemoth of a disposable vape I’m not joking. It has the diameter of a 60ml bottle of ejuice and it’s nearly just as tall. It’s basically a disposable in the form of a vape pen. That being said, this is not as portable as smaller disposables and you’ll feel the weight and size in your pocket. Carrying multiple was a no-go for me because I didn’t want to have a mass of vapes in my pocket so I tended to bring just one of these out when I left the house.

Portability aside, the large diameter makes them natural and comfortable to hold. It’s really like holding a vape pen. My hand doesn’t have to scrunch up to hold one so they’re actually rather nice to use.

Of course, the large size of the Draco’s isn’t for no reason. Each one comes prefilled with 16ml of ejuice, which is more than I’ve seen in any other disposable. Each one comes in 50mg nicotine strength, made with tobacco-free nicotine, and also has a 1000mAh battery that is rechargeable using the micro-USB port on the bottom of each device. The 16ml of ejuice and the fact that these are rechargeable means that (according to VaporLax) you should get 6500+ puffs from a single Draco disposable.

The body is made of plastic. It’s shiny on all of the Draco’s and textured in a diamond pattern. It’s really flashy, especially when the light catches them. Not my favorite design but they don’t look awful. A matte or flat finish would have been better though. Each one is colored according to the flavor inside, but the flavor is also labeled on each one.

The drip tip is rounded and about the size of a 510, if not a little bigger. It’s transparent which gives you a look into the rubber seal on the inside. This rubber is to prevent leaking and in my experience it does the job. I have not had ejuice leaking from the mouthpieces of any of my units during my testing.

One flaw I noticed on one of my units is that the plastic body cracked a little, just under where the mouthpiece meets the body. It’s thin, hairline cracks that are on opposite sides of the top of the Draco. This only happened on one of my devices so it seems like a limited issue but it’s something that I had to mention. I will also note that I did not drop or otherwise abuse this unit. 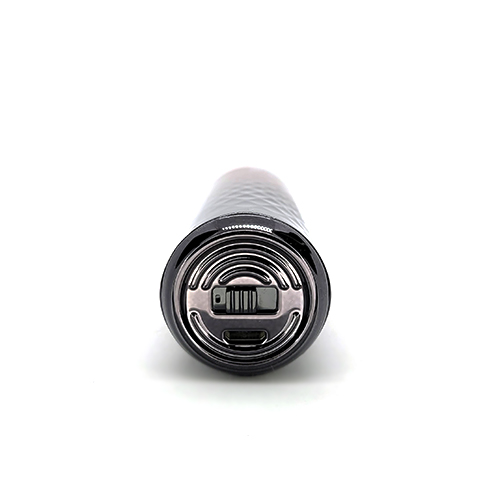 Other than the small cracks on one of my disposables, the build quality is good. The plastic body feels solid and the construction of the drip tips is flawless. The airflow control on the bottom of the device also feels pretty good.

Speaking of which, yes, these have airflow adjustment. It’s a slider on the bottom of the device which lets you go from a mouth to lung draw to a tight mouth to lung draw. Just from the size of these I expected a more airy draw but I was pleasantly surprised to find that they do MTL. 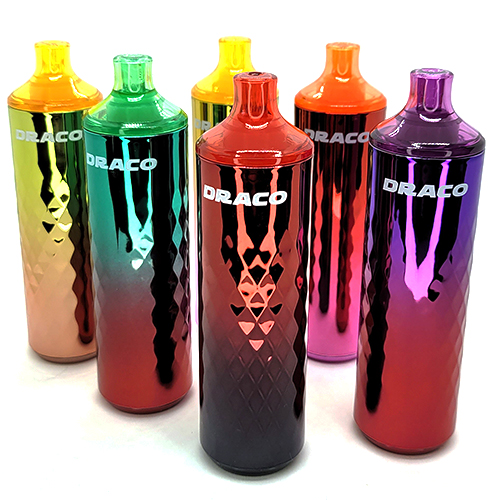 Draco disposables come in 12 flavors. Compared to VaporLax’s other disposables, this is about half the amount of flavors, but still just as many as most other disposables out there. Flavor options are mostly fruits, with fruit/menthol combos as well. There’s also a lemonade flavor and a strawberry cream flavor. There are no tobacco or dessert flavors.

An evenly balanced blend of strawberry and kiwi, you can’t go wrong with this flavor. It’s very fruity and just sweet enough. Both flavors are equally as strong and I taste the kiwi and the strawberry on both the exhale and the inhale.

The flavor description for this disposable is spot on. It’s a mix of raspberry, strawberry, blueberry, and cream. The flavors are all mixed together so it’s hard to single out a single flavor, but I taste all three fruits at different times during the inhale and exhale. The cream comes through strongly and is present throughout the entire vape.

This is a truly unique flavor and one that I really like. The flavor of dragonfruit is the main flavor that I taste on the inhale, along with some lemon flavor. On the exhale is where the mango comes in with more of the lemon. I would have liked this flavor even more with a strong mango presence but it’s very tasty as it is.

From the description I thought that I would like this flavor but it tastes like medicine to me. The citrus and lemonade remind me of vapor rub or Halls and I can’t get past it. This one is a pass from me.

Sweet peach flavor and just a touch of menthol is what this flavor brings. It’s a solid, natural peach flavor that is complimented nicely by the light menthol. There isn’t much to say about this flavor other than if you like peach vapes and some menthol, try this one out. 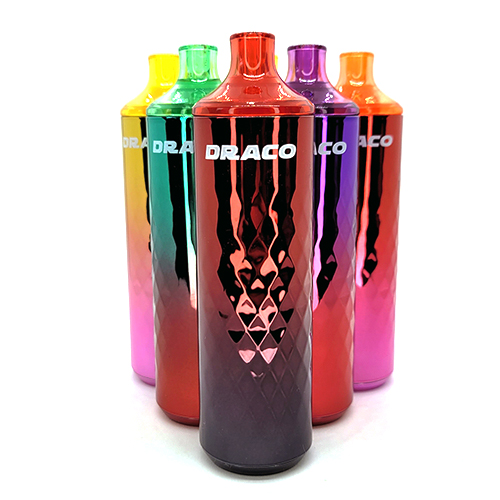 I mentioned this a bit earlier, but I have to say that I was surprised by the nice MTL draw that these provide. I expected a looser draw just because of how large these are, but they deliver a good mouth to lung with the airflow open and a tight mouth to lung draw with the airflow slider closed. It’s a true MTL disposable with a lot of puffs to back it up.

The vapor and strength of the draw are also great. The 50mg tobacco-free nicotine salt ejuice gives a satisfying draw that is full but not too strong. The draw is also not harsh, no matter which flavor I use.

These disposables are rated for 6500+ puffs. I did not get anywhere near this amount of puffs with any of these, but I did have to recharge the Mango Dragonfruit and Strawberry Kiwi disposables once. After recharging they have still been vaping as they did when I first opened them.

As for any issues, I have had none that are performance related. The draw activated firing doesn’t require you to pull very hard to get it to work and it hasn’t malfunctioned on any of my units. I also have not had any leaking, even when I’ve left these on their sides.

VaporLax’s Draco disposables are the behemoths of the disposable vape world. They’re an attractive option because of the 16ml of ejuice that they come with, as well as for the fact that you can recharge them. The mouth to lung draw and option to adjust it down to be a tight MTL draw is also a pro for these disposables. They hit great and work well which is about as much as you can want from a disposable.

On the other hand, these are huge. If you enjoy vaping on just one flavor at a time and don’t mind that these are nearly as big as a 60ml bottle of ejuice, I don’t see a reason why you shouldn’t get them. But if you enjoy taking a few disposable flavors with you to switch up through the day, you’re going to have a full, heavy pocket carrying a few of the Draco’s around.

The Draco disposables are a good option, it’s just a tradeoff of portability for ejuice capacity.