Voopoo Drag Nano 2 Review: Is The Performance Worth It? 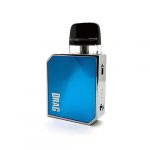 The Drag Nano 2 is Voopoo’s latest pod vape. It’s the successor to the Drag Nano that came out in mid 2019 and it brings along with it a bunch of upgrades. Voopoo has mostly been releasing pod mods as of late, like the Drag S Pro, Drag X Pro, Vinci 2, & Vinci X 2, so it’s nice to see them putting out another true pod vape.

This is a draw activated device and it comes with two, 2ml pods. These pods have the coils built in. The DN2 has an airflow adjustment slider and three power level outputs and, last but not least, it houses an 800mAh built-in battery that charges through a Type-C port. With so many other pod vapes to choose from what, if anything, sets the Drag Nano 2 apart? Let’s get into it! 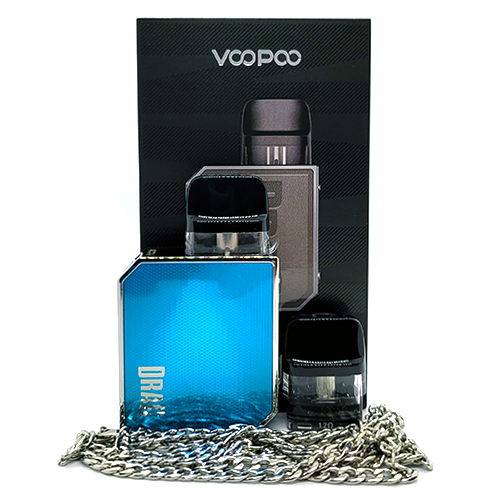 The Drag Nano 2 stays true to its name and presents itself as a tiny and handy pod vape. It’s only 72mm tall (including the pod), 44mm wide, and 14.2mm thick, and it weighs around 68 grams with a full pod of ejuice. It’s on the smaller side of pod vapes out there and that’s one of the benefits of picking one of these up over another device. It’s a device that you can put in your pocket and forget about until the next time that you want to vape.

So it’s called the ‘Nano’ because it’s small, but what makes it a ‘Drag’ device? As far as I can tell not a lot, but the design definitely shares some similarities with Voopoo’s Drag box mods. The DN2 has a square shape, but two of the corners are slanted rather than straight. This is a signature of Drag series mods so it’s cool to see it incorporated into the design here.

The body is made of zinc alloy which is finished in a shiny silver. This is the same no matter which of the 8 panel designs you choose. Three of these options are finished with polycarbonate panels and the other five feature leather panels. The leather options have DRAG debossed in large letters across one side of the panel while the PC panels feature smaller and more subtle branding.

In my day to day use the Nano 2 has been pretty durable. I’ve dropped it hard a few times and although there are some minor chips in the zinc alloy frame, the overall condition is still good. The PC panels don’t scratch or wear easily and still look good as new after the drops. The shiny finish on the frame picks up smudges and fingerprints like crazy but that’s the worst that I can say about the design.

At one corner of the DN2 there’s an anchor spot for a lanyard which comes included in the box. It’s a chain-style lanyard that I’m not really a fan of wearing but the option is there. You can also use any other lanyard that you may have and use it with the DN2.

On the side of the device just under the pod is an airflow control slider. It’s stiff and doesn’t move easily but I prefer this rather than it being too loose. The slider will stay put wherever you set it so you don’t have to worry about it accidentally moving in your pocket.

Below the airflow slider are three LEDs and a small round button. The color of the LEDs indicate your power output level and the number of LEDs signals your battery level (I will go into detail about these a little later in this review). The button is stiff and clicky which, like the airflow slider, means that it’s not going to activate in your pocket.

The Drag Nano 2 looks good and the build quality is great. The zinc alloy frame picks up fingerprints but that’s the biggest design con that I could find. The Nano 2 gets solid scores in these categories. 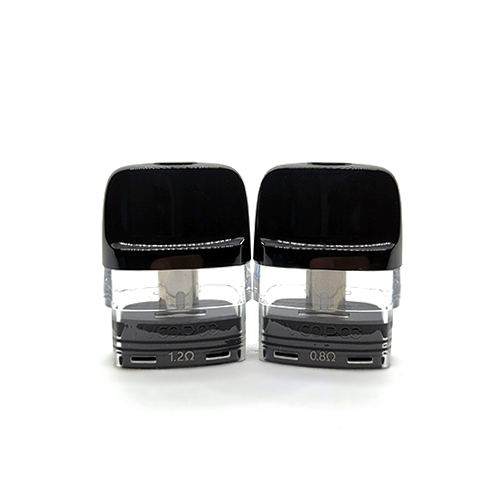 A 0.8Ω pod and a 1.2Ω pod come in the box. The coils are built into the pod and cannot be replaced. Instead you replace the entire pod when it starts to taste off or burnt. The pod clicks into the top of the device and sits firmly with no wiggle.

The pod sits in the device in a way that leaves the contents visible. The pod is also clear without any sort of tint so you can check how much ejuice is in the pod without removing it.

All of this means that you’ll never have to remove the pod from the battery unless you’re replacing the pod.

How to Use the Drag Nano 2 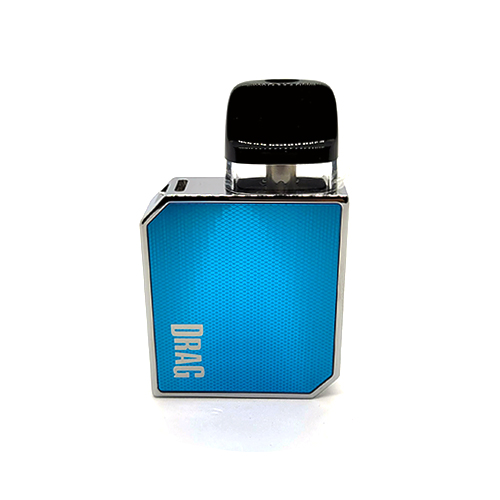 The Drag Nano uses Voopoo’s Gene chip and lets you choose from three power level outputs. As I mentioned before, it also lets you adjust the airflow. However, this doesn’t mean that it’s complicated to use. In fact, it’s really easy to use once you know how to work it. Even new vapers or those who aren’t technologically inclined will get used to it quickly.

The round button on the side is the way to do everything. Clicking the button five times will turn the DN2 on or off. Once the device is on you can press the button three times to enter the output wattage change mode, and then click it to cycle through the three output levels. Each level is a different color LED. The levels are:

When you draw from the device the LEDs will light up in the color that indicates your output level and the number of LEDs that light up will tell you your battery level:

You can press the button once at any time to illuminate the LEDs and tell you your output level and battery life. 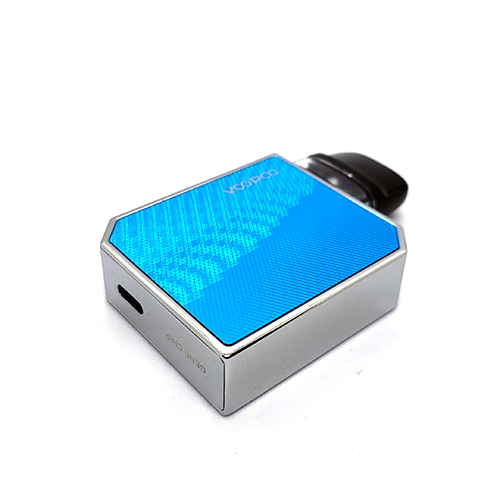 The Drag Nano 2 has an 800mAh battery that recharges through a Type-C port on the bottom of the device. It’s pretty good on battery life but this really depends on the pod that you use and what power output level you vape at. Vaping at the lowest setting you can vape around three pods without recharging. If you vape at the highest power level you can expect just about 2 full pods.

Using a wall charger the Nano 2 will recharge in only 45 minutes from completely dead so you’ll never be without it for too long. Unfortunately it does not have pass-thru charging so you cannot vape on it while it charges. 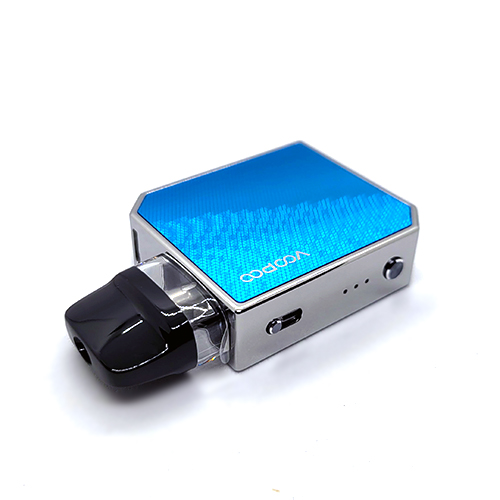 One complaint that we had about the original Drag Nano was that the draw was way too tight. It was difficult to pull on and took a lot of effort to get it to work. The Drag Nano 2 doesn’t have this issue and the draw activation works perfectly. It’s a tight mouth to lung draw but you don’t have to struggle to vape.

The 0.8Ω pod is great for flavor. I get the full flavor profile from my ejuices even at the medium power output setting, complete with warm vapor. Leaving the airflow open gets a loose mouth to lung draw that can go to a tighter MTL draw by closing it down. The medium power level was my preferred setting for this pod. Nicotine salt ejuices vape very well and aren’t too overpowering. The issue with this pod is that it struggles with chain vaping higher VG eliquids (those 70VG or more).

The 1.2Ω pod, in my opinion, is even better overall. The flavor is slightly less intense but still excellent. The reason that I like this pod better is that the draw is tighter even with the airflow open, and it doesn’t have any issues with high VG ejuices. Chain vaping isn’t a problem at all. The high (white) power level is what I found worked best for this pod. Nicotine salts of all strengths work really great and you can adjust the power level if you find high nic ejuices too strong.

The Drag Nano 2 is one of the best pod vapes that I’ve used in a while. There are really no cons to speak of; the ones that I found I really had to look for. It works well for exactly what it’s meant for and that’s MTL vaping with nic salts. It’s a minute device that you can take anywhere and it still gives you airflow control and three power level outputs. And although you have this level of adjustability, it remains easy to use.