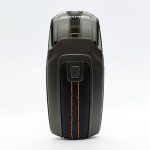 When I think of Geekvape one word comes to mind: durability. Their IP67 rated devices like the Aegis Legend, Aegis Solo, Aegis Squonk and Aegis Boost are some of the toughest around. And they’re not only tough; they’re also some of the best performing devices that you can get.

The Geekvape Aegis Pod is their latest IP67 rated device. Whereas the Aegis Boost is larger and perhaps more complicated than a beginner vaper might like, the Aegis Pod is Geekvape’s first simple and compact pod device.

The Aegis Pod is small, slim, and light. It’s IP67 water, dust, and shock resistant. It packs an 800mAh battery and charges through a Type-C port. It has a 3.5ml capacity pod and comes with two 0.6ohm coils that are good for both regular nicotine ejuices and nicotine salts. This device is much more pocketable than the Aegis Boost so I’m excited to see if it performs on a similar level. Let’s find out. 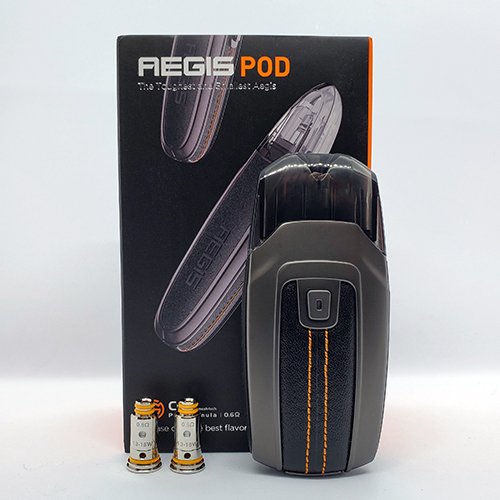 From the moment you see it, the Aegis Pod is immediately recognizable as a Geekvape device. It has Geekvape’s signature “Aegis” look to it with its stitched leather patch surrounded by metal bezels, and the signature rubberized sides. Even though the shape is completely different from other Geekvape devices, the Aegis Pod stays true to the traditional Aegis design.

Where this really differs from other Geekvape devices is its size. The Aegis Pod is only 88mm tall, 40.3mm wide, and 18mm thick. This is definitely the thinnest and smallest Aegis yet. I can’t quite conceal it in my hand, but then again my hands are small. If you’ve got average sized hands you can probably palm this without an issue. The 18mm thickness allows me to slip it into my pocket easily.

As of now the Aegis Pod is available in four colors: black, silver, gunmetal, and rainbow. They all come with black leather, although the color of the stitching and the color of the body varies by which one you pick up.

There’s only one button on the Aegis Pod and that’s the firing button. It’s raised from the body of the device so it’s easy to activate. I found it most comfortable to thumb-fire but it can be index-fired just the same. The button is firm and clicky but I still found myself accidentally activating it at times. The button could do with being a bit harder to press.

Overall, the Aegis Pod is a good looking and well-built device. I like the compact size and slim profile because it’s much more portable than the Aegis Boost. The build quality is on-point and nothing short of perfect — exactly what I expected from a Geekvape product.

You get one pod in the package and that’s fine by me because the Aegis Pod uses replaceable coils. You can reuse the pod. The pod is lightly tinted to match the device but it’s still easy to see the ejuice inside.

The pod has a 3.5ml capacity. This is only slightly lower than the 3.7ml capacity of the Aegis Boost pods. The pod doubles as the mouthpiece and it’s quite wide and convex in shape. It takes a bit of getting used to. It’s not uncomfortable per se but it would have been more comfortable to use if it was indented.

The pod pressure fits into the device and it’s held in place by clips. The pod sits very securely in the device, maybe even too securely. I found it difficult to remove the pod because the smooth sides give nothing to grip. Good luck if you have sweaty palms!

The fill port is situated on the bottom of the pod and consists of a thick rubber plug. This plug is deep and plugs the fill port well. It’s easy to remove and gives you access to a single, large and round fill port. This fill port can fit any type of ejuice bottle or nozzle. Because this is a single hole, I sometimes had problems if I filled fast where ejuice would come back out the fill port. Take your time filling and you won’t have this issue.

Two identical 0.6ohm mesh coils come in the package. These are Geekvape’s new G.coil type coils which will apparently be compatible with future products in the same 5-20W power range. This also means that any G.coil type coils that are released in the future will be compatible with the Aegis Pod (provided that they’re meant for 5-20W). Pretty neat!

These 0.6ohm coils pressure fit into the bottom of the pod. From what I gather from the specifications of the Aegis Pod, these will fire at an 18W constant output. These coils can be used for either regular nicotine ejuices or with nicotine salts.

Coil life seems to be quite good. Even after 20ml through a single coil, it was still going strong. Only once I reached 25ml did I start to taste the flavor starting to drop off. 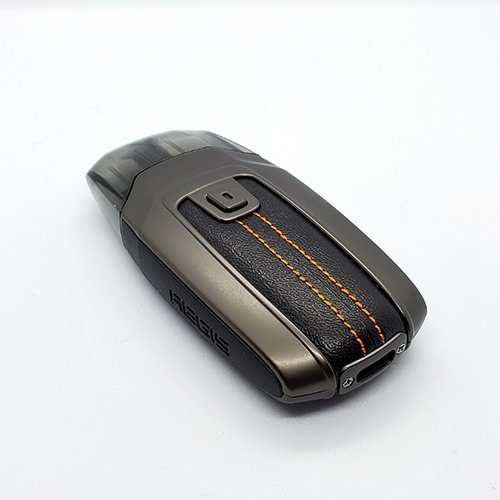 The Aegis Pod has an 800mAh built-in battery; about average for a pod device. I’ve seen pod devices with smaller capacities but also ones with much larger capacities.

Similarly, usage times are also average. From a full charge I vaped 1 and a half pods before the battery died, or just under a day of heavy use. Nothing too special but considering the small size it’s almost expected.

Charging times for the Aegis Pod are quick. Using the included cable I was able to fully recharge my Aegis Pod in only 40 minutes. So while it doesn’t have incredible usage times, it does recharge very fast. 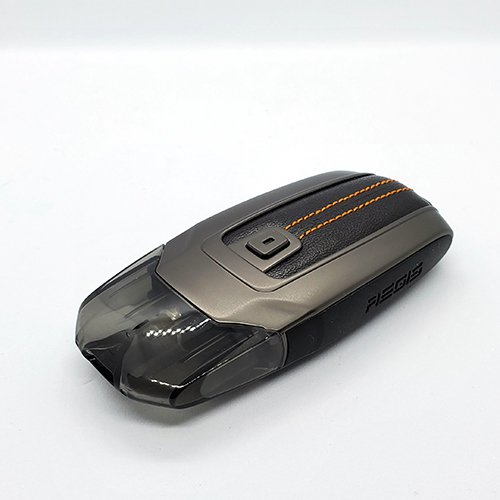 After spending a few weeks with the Aegis Pod, I feel like I have a good feel for the device. I’ve used the coils with both regular nicotine and salt nics in a variety of different flavors. As such, I have a pretty good idea of how good the flavor is from this device compared to other pod vapes. I also have a good grasp of how good the device performs overall.

One of the best things about the Aegis Pod is that it’s simple to use. For someone just picking up vaping, this is the perfect choice. While the Aegis Boost had airflow control and wattage adjustment, the Aegis Pod has neither. This might be seen as a downside for more experienced vapers but I think new vapers will appreciate the fact that this device just works with no settings to fiddle around with.

Adding to this, its simplicity doesn’t compromise the performance. The flavor that I get is actually really good and very enjoyable to vape on. And whether I use regular nicotine or salt nic ejuice, the performance is great all the same. The draw with a 25mg nic salt is nice and smooth and I’m sure that the 18W constant output would work great with even 35mg+.

I used all sorts of ejuice ratios from 50/50 to 80VG and the pod didn’t leak. After long vaping sessions I would regularly check the battery/pod for ejuice but there was never any. On the other hand, the coil did seem to have trouble wicking high VG ejuice. 70VG and lower wicked perfectly, but taking quick, successive draws seemed to be too much with an 80VG ejuice and I started to taste the beginnings of a dry hit.

For all you vapers wondering about the airflow, the Aegis Pod delivers a loose MTL draw that verges on a restricted lung hit. It’s a nice draw but I would prefer if it was tighter, especially for when I’m using salt nics. If you’re looking for a device with a tight MTL draw, you’ll have to pass on the Aegis Pod.

The Aegis Pod doesn’t have airflow control or wattage adjustment, but it’s an easy to use device that just works. Advanced vapers or those looking for a tight MTL draw will likely find the device unsatisfactory. However, those new to vaping will probably enjoy the Aegis Pod because it just works and still delivers good flavor all the same.

Overall, this is a pretty good device but there are a few improvements that I can think of. A larger battery would be nice, although the quick charging makes this not too big of an issue. Making the pod easier to remove would also be a welcome change.

For a super portable Aegis, Geekvape have done a solid job with the Aegis Pod.