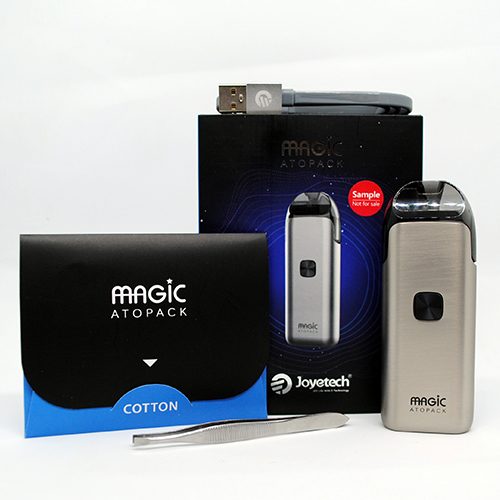 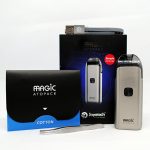 The latest device from Joyetech is here, and this time they’ve released a pod-style vape. The ATOPACK Magic is an all-in-one device with a built-in battery and refillable pods. But it also brings a new coil-less “NCFilm heater” to the table. This system can be rewicked multiple times, which is said to extend the life of your pods by up to 3 months. However, I faced a couple of issues with the Atopack Magic that made my experience a little less than magical.

Because while there are some great points to the device, the execution could have definitely been better. Let’s get started with what’s inside the box: 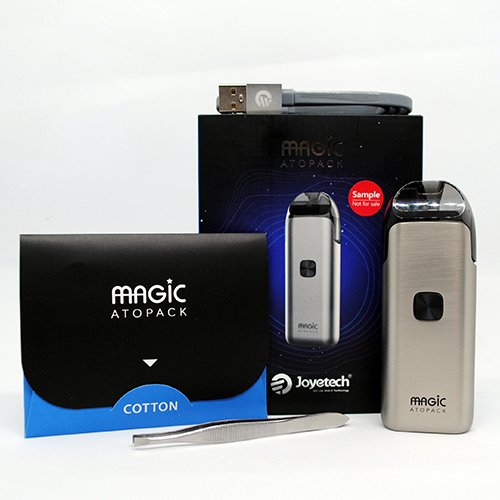 Inside the box you get the Atopack Magic battery, as well as a single pod. I would highly suggest picking up some extras if you purchase this kit. 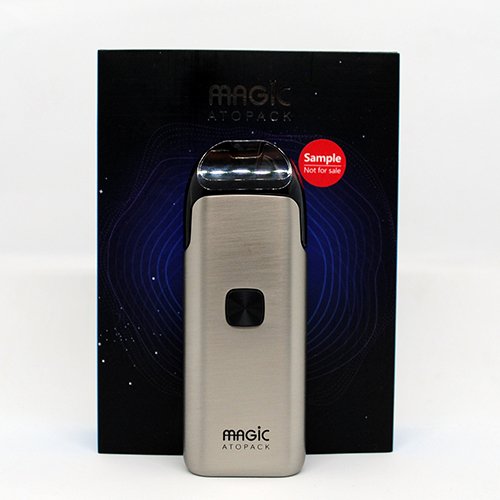 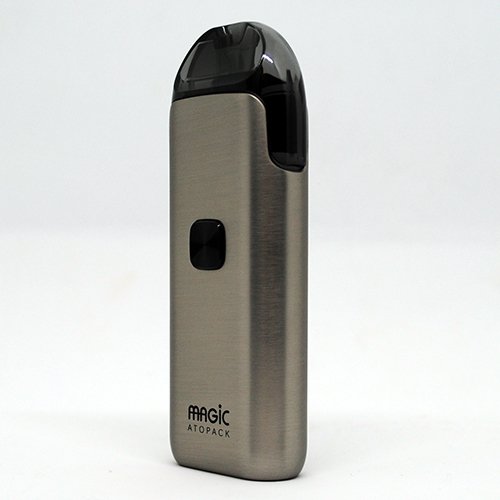 The Atopack Magic looks very similar to the Aspire Breeze 2 with its form factor and button-style; but that’s about where the similarities end. The Atopack Magic is quite a heavy device for an all-in-one, and this is due to its heavy-duty metal case. It’s also a bit thicker and taller than you might be used to from all-in-ones, but it gives the device a nice feel in your hand. You definitely won’t forget that you have it on you, that’s for sure.

You can currently get the Magic in three colors, and we received the Silver color for testing. It looks more like an unpainted stainless steel, which is kind of cool, and so I don’t think it’s going to flake or chip. However, I can’t speak for the other colors. 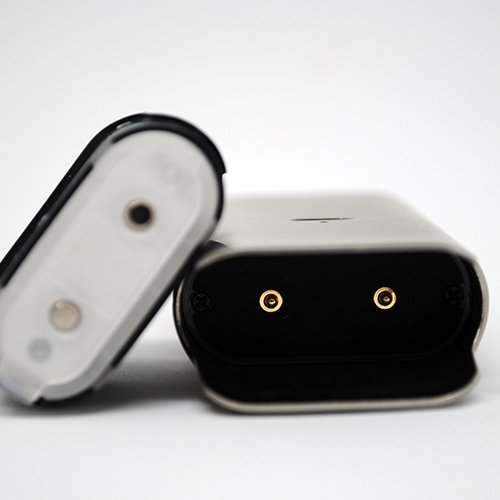 The Atopack Magic has LED lighting in seven colors. This lighting is hidden in the battery housing of the unit, directly underneath the pod, and lights up every time you press the fire button. Unfortunately, because of the positioning of the LEDS, it doesn’t show through the pod at all. 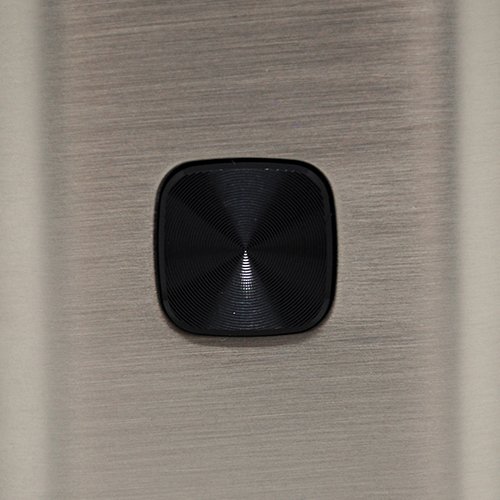 The Magic is button activated, and has a single fire button the front of the device. To turn the device on or off, click the fire button five times. This button is a similar style to the Aspire Breeze 2, and has a nice click to it when used. It doesn’t take too much pressure, and is positioned well on the device for use with your thumb.

The Atopack magic comes with a single pod in the box, which has some labeling on it to indicate what juice you put inside. A spare is always handy, so it was a bit disappointing to only get one. However, once I realized how the device worked and wicked, I understood why they only included one.

This pod is massive and will hold up to 7ml of eliquid; which is more than most other pod systems out there. Plus, the pod is only very lightly tinted, so it’s easy enough to see your ejuice level. You simply pull or push the pod onto the Atopack Magic battery. 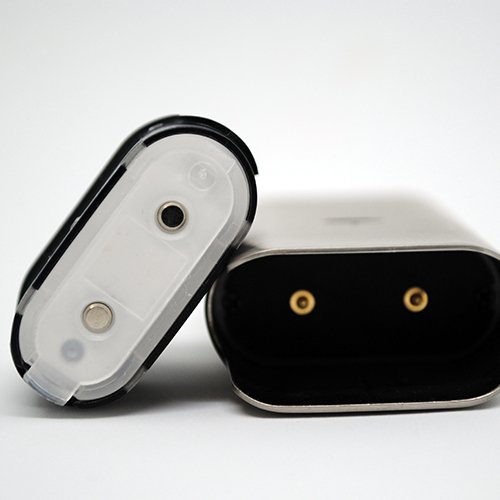 Inside the pod is a 0.6ohm “NCFilm heater” coil, hidden underneath a silicone flap. To access it, you have to unlatch a tiny door made of very thin plastic. And when I say thin, I mean it; my clip on my pod broke within just a few days of use, which is definitely not good. They could have made this stronger for sure. Because while I was still able to use it, it made incidences of leakage much more frequent.

This NCFilm heater is unlike regular coils, and is instead a flat piece of mesh-like kanthal. With this system, you simply lay a small cotton square onto the coil for wicking, and close the silicone flap over it. Joyetech say that this coil can last up to 3 months, and that you simply need to change the cotton every few tanks but we’ll see how this holds up a little later. If this is indeed the case, it makes sense to only need one pod. You get 50 square of cotton included with the Atopack. 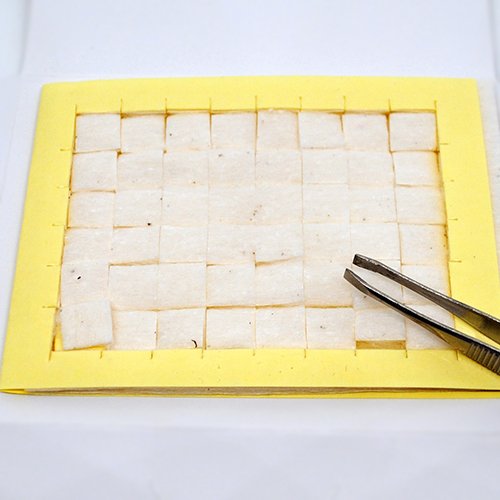 Underneath the pod door, located right next to the coil is a small, circular fill port. I had to be very careful when refilling, otherwise juice would come spilling right back out. 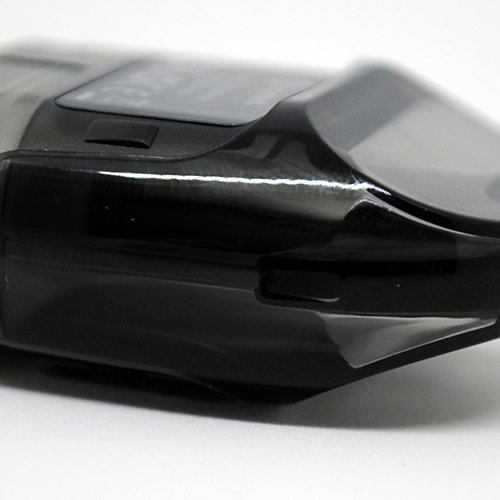 The airflow on the Atopack Magic is located on the side of the pod, and is non-adjustable. It’s a single wide slot that provides a very airy draw, and is definitely meant for DTL vaping. While you can make it work with MTL draws, you may find the draw a bit loose.

The airflow is also quite loud, and you can hear a fair bit of gurgling. 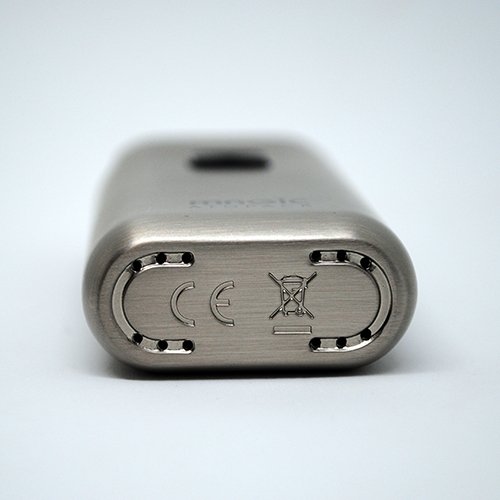 The battery on the Atopack Magic is quite large and is a built-in 1300mAh capacity battery. Because of the low constant voltage of 3.2V, I found the device lasted me a very long time without having to charge. I averaged just over two days of use per charge, and that’s with heavy vaping use.

The battery life is great when compared to other pod devices, and this is probably the best feature of the Atopack Magic. 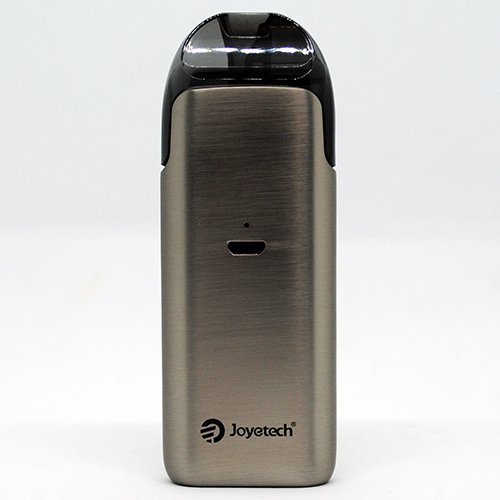 The indicator light will start to flash more rapidly as the battery dies, letting you know that it’s time to charge up. And this is another strong point of the Magic, as it charges rather quickly as well (in about an hour and a half). 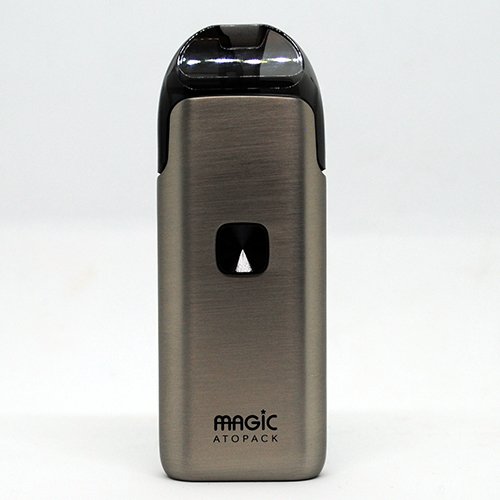 With its constant output voltage of 3.2V, I found the Atopack Magic to deliver cool but smooth vapor. Overall, the flavor was pretty average; which is disappointing as I was expecting more out of the NCFilm heater. Plus, I found that the coil itself was getting a little discolored after about a week of use, so I don’t think you can get 3 months of use out of one pod. I think maybe a month tops, and that’s pushing it.

You can blow some pretty large clouds, but because of the very cool vapor, I was left still feeling unsatisfied after vaping. With the Magic, I had to up my nicotine in my ejuice in order to compensate for this very airy and light vapor, but it still was not quite the same as other pod vapes.

For nicotine salts, I found the same thing. It wasn’t as satisfying as with other vapes even with the 0.6ohm resistance. It’s quite airy, and still very smooth, but doesn’t give me that satisfaction I was looking for. 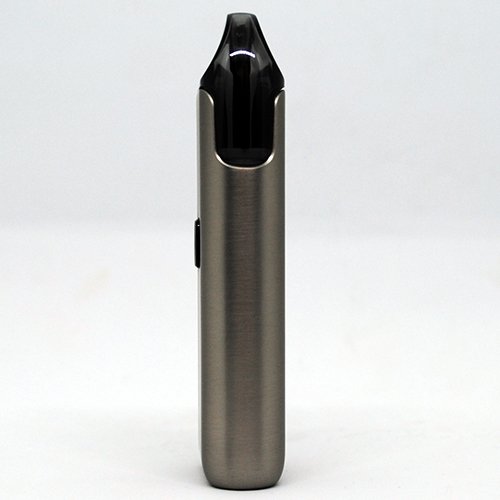 In terms of vapor quality, I would say that it’s a fair bit below average. While the NCFilm heater is an innovative idea, it didn’t produce the results that I thought it would. Don’t get me wrong, it’s decent in terms of vapor production if you like a cool vape, but the flavor is just not there. I hoped that it would be, because of the mesh-like design of the coil and the small surface area of the cotton squares, but something just isn’t quite right.

Plus, with the weight of the Magic being so heavy, I really felt like it would make more sense to carry around a box mod and tank instead. The point of a pod mod is to be portable but still convenient. And while it’s cool to be able to rewick your pod, I wish it delivered in the flavor department and was maybe a little less cool.

One very positive note about the Magic is that it is very consistent and does indeed feel like it’s outputting 3.2V constantly. When the battery is dead, it will just stop functioning.

The Atopack Magic is a pod system that you can rewick; but there are a few key areas that fall short and could use some tightening.

If you’re looking for a pod system for nicotine salts, there are much better options available. The Aspire Breeze 2, Mi-Pod, and most recently the Eleaf Elven are all super portable and deliver great flavor and vapor quality.

The fact that the clip is easily broken is frustrating, and is enough to be a deal breaker for me. The pod doesn’t click into the housing, the device is quite heavy, and the NCFilm doesn’t produce the best flavor or clouds. Overall, there are some major issues that need to be fixed with this device.

Until next time — Stay Versed!