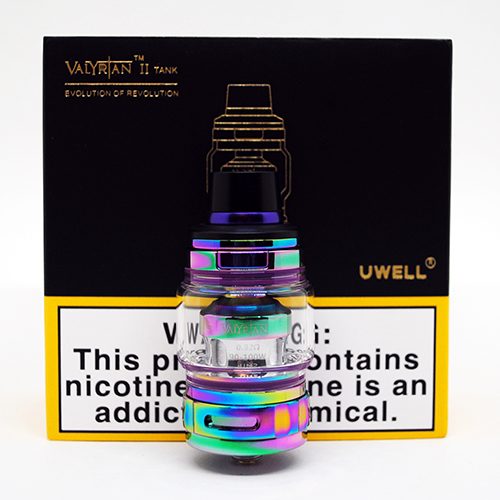 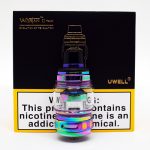 Uwell have been on a roll lately. The Uwell Amulet is a vape watch that actually proved to be a decent vape and the Caliburn is without a doubt one of the best pod vapes available. These great devices are in addition to their sub-ohm tanks which have always been exceedingly good.

The Valyrian 2 is the latest offering from Uwell that, once again, aims to set the bar even higher. The original Valyrian was already a great tank that delivered top notch flavor but from what I’ve heard, the Valyrian 2 is supposed to be even better! It’s got a 6ml tank capacity, a hinged top-fill cap and it comes with two coils: a 0.32ohm single mesh coil and a 0.14ohm double mesh coil.

Is the Valyrian 2 the new king of sub ohm tanks?

This tank was sent to me by Eightvape for the purpose of this review. 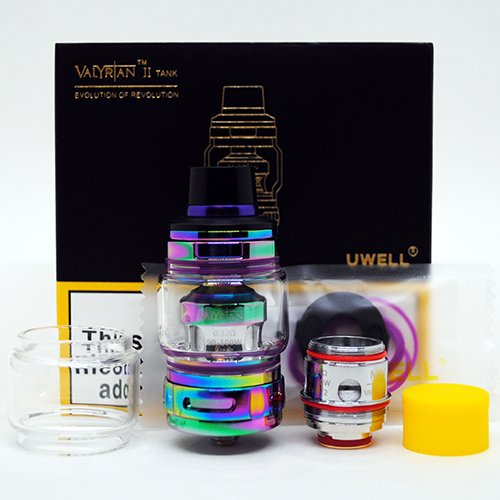 I received the Uwell Valyrian 2 in the iridescent rainbow color and it’s a very pretty tank! I love rainbow tanks and the colorway on this one is perfect. It matches extremely well with my rainbow mods like the Charon Mini 2.

The Valyrian 2 has a 25mm base diameter. That’s average sized so it won’t overhang on most dual battery mods. As far as looks go, the Valyrian 2 is nearly identical to the original Valyrian. It’s got a drip tip with a metal band and narrows near the tip, an identical hinged fill cap and nearly the same airflow control ring. I liked the look of the original so I won’t complain that they left the outer design the same.

The top cap is sturdy and makes for easy refilling. There’s a small button on the side of the top cap that can be pushed to pop open the fill cap. It’s spring loaded and opens rapidly. There are two large fill holes and they fit pointy-tip bottles and dropper bottles with ease. The Valyrian 2 also comes with bubble glass as standard so it will hold 6ml of ejuice in its tank. It comes with a spare bubble glass in the packaging in case you break the first one too.

An intriguing feature of this tank is its “self-cleaning” system. It’s the same system used on the Crown 4 that sucks up condensation from the airflow control base and directs it back to the coil. This is supposed to eliminate leaking from the airflow control ring and, so far, it’s been doing its job. My airflow ring has remained relatively dry even after long vape sessions so it appears that this self-cleaning system is really a thing.

Build quality is as I expected from Uwell: top-rate. The machining is nice and even the spring-loaded fill cap is sturdy. Nothing to complain about here!

Two coils come with the Valyrian 2 and they’re pretty beefy in size:

These coils are pretty big so I’m surprised that there’s still room for 6ml of ejuice in the tank! They screw into the base of the airflow control ring and then attach with the chimney to secure the whole tank together. The chimney is domed where it meets the coil and this helps in concentrating the flavor.

The 0.32ohm single mesh coil is rated for 90-100W. This seems a little high to me. I used it from 70-80W and got the best flavor and performance. I tried upping it to 90W but I didn’t find that it helped much. Seems like the wattage is overrated here. Regardless, it wicked well with most ejuices but seemed to struggle a bit with max VG. I didn’t get any dry hits but at times it felt like it was getting there.

With the 0.14ohm coil the wattage rating was much more accurate. It’s a dual mesh coil rated for 80-90W and 80-85W is the perfect vape. I was blowing out thick clouds that were clouding up the room! This coil wicked flawlessly even with max VG ejuices and managed everything that I threw at it. Truly a versatile coil.

I’ve only had the chance to vape these two coils that came in the package but there are two other coils available for purchase: a 0.15ohm quadruple coil and a 0.16ohm UN2-3 triple mesh coil. I can only imagine how good these coils are since the single and dual mesh coils are already amazing. I’m going to order some and test them out as soon as I can find a place that has them in stock! 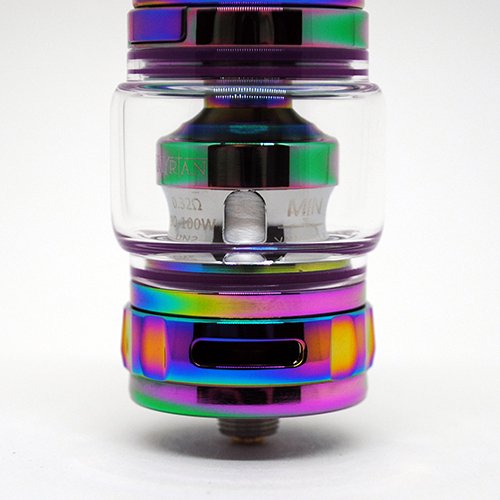 There are three wide slots for airflow which are located at the base of the tank. They’re relatively wide and fully adjustable. I didn’t much like the airflow completely open and much preferred the draw closed down. It’s just too airy when fully open. Closing the airflow down makes the draw a little more restricted and more pleasant to vape on.

There’s a bit of a difference between the two coils. The 0.32ohm single mesh coil is more open while the dual mesh coil is slightly more restricted. If I had to choose which one I like better I would pick the draw of the 0.14 ohm coil. That’s just me though and your opinion might be different. 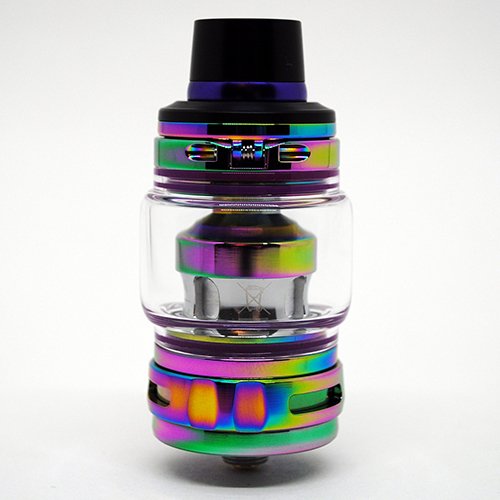 This tank is awesome! The original Valyrian was always going to be a tough tank to top but the Valyrian 2 manages to do it. The flavor is really on point; it’s definitely one of my new favorite tanks to use! It’s very comparable in performance to the best sub-ohm tanks of this year like the OFRF NexMESH and HorizonTech Falcon King.

The 0.32 ohm coil is very good for a single mesh coil. Single mesh coils usually aren’t that flavorful so this one surprised me. For the most part I used it at 75 watts and got really good and crisp vapor.

The star of this tank though is the 0.14ohm coil. It’s a double mesh coil and boy is it good. Probably some of the best flavor I’ve gotten from a sub-ohm tank and that’s saying something. The only downside is that it’s a juice guzzler and I was going through ejuice like no tomorrow. For the flavor it gives though, I almost don’t mind.

Both coils took a half tank to break in before they started to deliver their best so keep that in mind. It’s average flavor for the first half tank but it quickly ramps up to being excellent.

Airflow is very airy when open so I always had the airflow at least halfway closed. It concentrates the flavor a bit more too while still keeping the vapor cool enough to be pleasant. 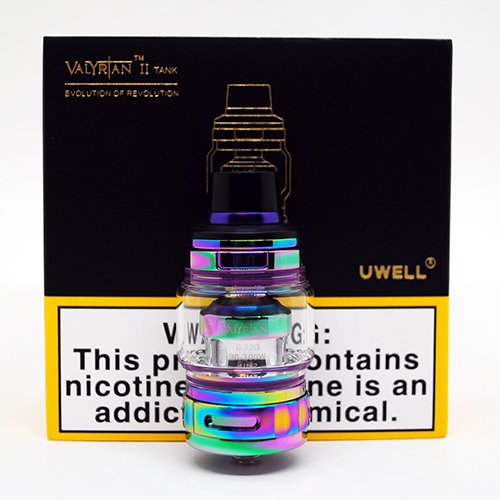 Should you get this tank? Without a doubt! If I were you I would buy one right now! It’s one of the best tanks of the year and I can say that with full confidence. The only real issue I had with the Valyrian 2 is that the draw is too airy with the airflow open but you can always restrict it down. I also only got to use the single and dual mesh coils for this review but if they’re this good, I can only imagine that the triple and quadruple mesh coils must be even better. I’m going to get my hands on them as soon as I can to verify though.

Have you used the Valyrian 2 yet? Let me know your thoughts!