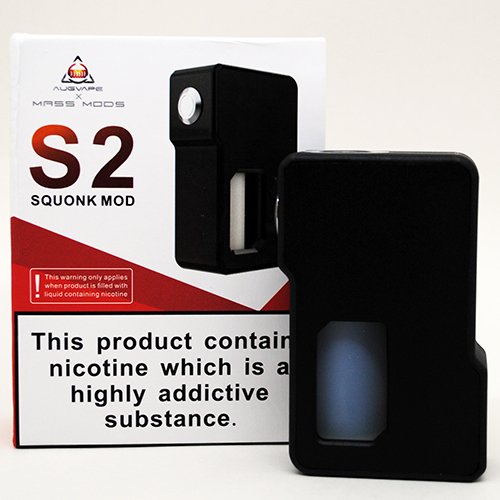 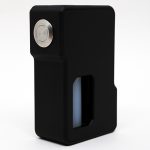 The Augvape S2 is a collaboration with Mass Mods. It’s a minimalistic, mechanical-style squonk mod with a single large firing button and an 8.5ml squonk bottle. I say “mechanical-style” because while it does have some protection in the form of a MOSFET this is still not a mod meant for beginners — you still have to have a firm grasp of Ohm’s Law and proper battery safety before using it. The S2 uses a single 18650 battery to function.

Mass Mods produce some expensive high-end mechanical mods so it’s interesting to see them collaborate on a much cheaper device. Augvape have been stepping up their game though and have been pumping out some very well made and high-quality products themselves like the Occula RDA, Druga Foxy mod and most recently the Intake Dual RTA.

If you’re into mechanical mods should you pick up the S2 squonk mod? Keep reading to find out.

This device was sent to me by Augvape for the purpose of this review.

One of the main features of the Augvape S2 is that it uses a MOSFET. But just what is a MOSFET anyway? Well, a MOSFET is a metal oxide semiconductor field-effect transistor; a mouthful I know.

But in simple terms, a MOSFET sends very little current to your power button and directs the power from your batteries to your atomizer. This helps to better regulate the voltage output of the device. It will also only fire builds that are 0.20ohms or above. In other words, the S2 is a bit safer than a mechanical mod without a MOSFET. It’s still dangerous if you don’t know what you’re doing though. You need to have a good understanding of Ohm’s law if you’re going to use this mod or any mechanical mod.

The S2 is small and boxy and primarily made out of plastic. The front of the mod has a metal battery door with a window cutout to access the squonk bottle. The back panel is also made out of metal and has MASS MODS engraved into it. There’s an Augvape logo engraved on the side of the mod too and it looks pretty damn cool.

The S2 feels a lot more sturdy and well-made than the original Pulse squonker, another popular unregulated mod. The metal panels are clean cut and fit perfectly into the mod. There’s very little wiggle. The battery door has magnets that connect to your battery to keep it in place. I don’t know why they would make the door magnetically attach to the battery but it is what it is.

The firing button looks and feels of quality. It’s clicky and has good throw when you push it. The button is slightly recessed into a silver ring that surrounds it to prevent accidental pushes. It’s still easy to hit the button but this ring should help to prevent any mishaps.

The 510 connector is clean cut and flush with the mod. The 510 squonk pin is spring-loaded and firm. A nice touch is that there’s an o-ring in the 510 plate that will prevent ejuice from leaking out from the bottom of your tank when you squonk.

The internals of the S2 are just as clean as the exterior. The wiring is neat and the components are properly machined. The PCB board at the base scares me though. It’s right under the squonk bottle and battery and I can only imagine that ejuice leaking onto it wouldn’t be good. I read that it’s water-proofed but it still could have been covered with plastic or something.

The squonk bottle is 8.5ml and fits snug. Right next to it is room for an 18650 battery but if you ask me it’s a little too snug. I had trouble removing my battery once I got it in because it fits so tight. I had to check my battery wrap for tears every time I took it out and I would suggest you do the same. 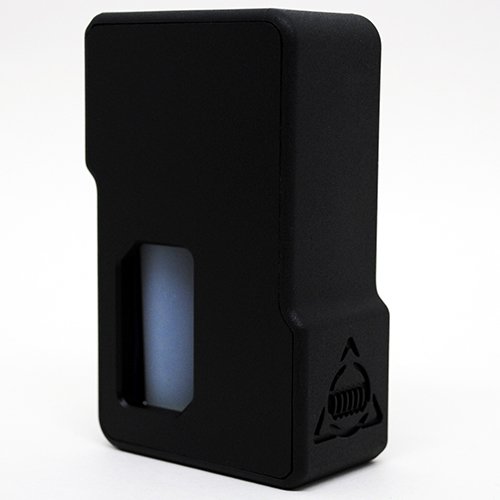 I used the S2 with my Wotofo Profile RDA and a build that came out to around 0.21ohm. There’s a noticeable firing delay with this mod because whenever I hit the button I had to wait for a second before anything happened. Instant-firing is a necessity in my books to make a good mod. Disappointing. I got used to hitting the fire button a few times before I took a draw in order to compensate but the delay is a bit annoying.

The draw is good but it doesn’t hit as hard as I expected. It’s not a ‘soft’ hit but it’s not a hard hitting mod either. Honestly, I wasn’t sure if it was really drawing the full 4.2V from a fully charged battery. But it hits and it does so reliably. Although it doesn’t hit hard I still enjoyed vaping with it.

Squonking with this mod works great. The bottle is easy to squonk with and I didn’t have any leaking. I’m glad too because as I mentioned earlier, the exposed board at the base of the mod scares me a little.

The S2 is a gorgeous mechanical-style squonker. That I have to admit. The build quality is there and I really like the button. However, the firing delay and the draw that it gives leave more to be desired. The exposed board could be covered and the battery compartment shouldn’t be so tight that I’m scared to rip my wraps.

I’m not going to say that you shouldn’t buy this mod because the truth is, I actually like it. It just has some room for improvements. If you want a mechanical squonker and can live with the firing delay then this is one of the best looking and most affordable options out there.