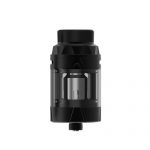 The Augvape Intake Sub Ohm tank is the latest tank in the Intake series. Designed by Mike Vapes and Augvape it introduces a new concept to sub ohm tanks; Clapton Mesh coils.

It follows on from the Intake RTA and the Intake Dual RTA, which were both decent RTA’s. So does the Intake Sub Ohm tank bring something new to the table with it’s Clapton Mesh coils? Let’s find out.

The Intake is a 25mm diameter sub ohm tank and measures in at 46mm tall. It is similar in looks to the Intake and Intake Dual RTA’s, having a nice chunky feel to it.

It has an 810 drip tip up top which is comfortable to use when vaping.

The top cap unscrews with a quarter turn which reveals the two large kidney shaped fill ports. There is a gasket seal around the whole top of the tank to help prevent leaking juice.

It has a nice design on the top cap, airflow control ring and base, which also doubles as knurling for grip when adjusting your airflow or unscrewing the tank. This design is the same as the one on the Intake and Intake Dual RTA’s, so it fits in nicely with the Intake family.

The airflow control ring is just below the top cap, with the tank having a top to bottom airflow system. The AFC has hard stops, so it doesn’t twist all the way around. It has a nice smooth and restrictive adjustment, so it won’t be accidentally adjusted in a pocket or similar. The airflow intake is angled down, so the air is directed straight down the airflow chambers on either side of the tank.

If you look through the glass of the tank you can see the two airflow chambers running down from the top of the tank to the bottom, on either side. I really like the look this gives the tank, instead of hiding them within an inner chamber.

On the base of the tank is a fixed gold plated 510 connector pin. If you unscrew the base you reveal the bottom of the coil. Coils are press fit, so you just pull out your old coil and press in the new one when changing them, then screw the base back on.

The review tank that I received was in a stainless steel colour. It has a brushed finish which means it doesn’t get covered in fingerprints. It is also available in a matt gunmetal finish and a matt black finish.

The build quality on the Intake Sub Ohm tank is very nice, as is the design of the tank. It looks classy and high end with just the right amount of design engraving that it finishes off the looks without going over the top. I like how the design engraving also doubles as knurling so everything that is present has a function and is not just there for the sake of it.

NOTE: On my review unit I had an issue with the top cap where it was too tight to screw onto the tank by hand. I had to use a pair of mole grips to hold the top cap and screw it on using them. It seems the ridges on the top cap were slightly misaligned with the notches on the top of the chimney section.

Augvape did send me another tank as a replacement and the new one was perfect. They did advise that this defect was not present in any retail versions of the tank, it was only present on a small number of review units that were produced.

The Intake Sub Ohm tank comes with three coils in the box, a 0.2ohm Clapton Mesh coil rated between 60-75W, which is pre-installed, a spare 0.2ohm Clapton Mesh coil and a 0.15ohm standard Mesh Coil rated between 60-75W. It’s become standard that you get two coils whenever you purchase a tank nowadays, so that extra coil in the box is a nice touch.

The stand out feature here is the Clapton Mesh coils. Although not technically mesh, the coils feature a number of Clapton wires arranged in rows. They are not straight wires but in more of a wavy pattern, this is to cover more surface area. The Clapton wires are connected either end to a positive and negative wire.

If you are into rebuildable atomisers and tanks, you will be well aware of what Clapton wires are. If you haven’t used rebuildables and don’t know what a Clapton wire is, it is basically a smaller, thinner wire wrapped around a larger core wire. It’s like a guitar string, which is where the name comes from; Eric Clapton!

The idea with a Clapton wire is that there are little grooves between the smaller wire where it wraps around the core wire. Juice seeps into these grooves and is held by the wire ,which means more juice is vaporised when the wire heats up and more juice vaporising means more flavour. 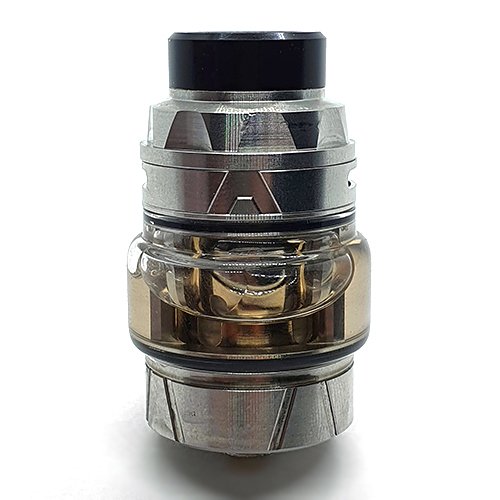 The Intake tank comes with one of the Clapton Mesh coils pre-installed and eagerness to try these new coils meant it was what I used first.

Next I tried the 0.15ohm coil, which is a more standard mesh coil. This coil is again rated between 60W and 75W. I found the flavour overall to be very good but not quite as good as the Clapton Mesh coil, but I thought there was slightly more vapour production with the standard mesh coil. Also I felt as though the Clapton Mesh coil had a slightly more restrictive feel when vaping.

With both coils I found there to be a slightly different taste to my juices than I was used to, so I can only assume this is the use of the wood pulp and cotton mixture as the wicking material in the coils. It’s a very nice flavour from both coils, with the Clapton Mesh coil just edging it for flavour production.

Coil life has been fantastic with both coils, I haven’t worn out either one yet during my testing period. I also experienced no dry hits with either coil so the wood pulp and cotton mixture does a fine job of wicking juice.

I also didn’t experience any leaking from the tank during testing.

The Intake Sub Ohm tank has performed flawlessly during my testing period. The flavour from both coils is great and I like the slightly different flavour tones that are produced due to the wood pulp and cotton wicking material.

The tank has a great build quality and it looks great visually. It is easy to fill due to the large fill ports, I had no leaking issues due to the top to bottom airflow and three coils in the box is a nice touch too.

Overall this is a very solid sub ohm tank that I will continue to use, especially as it offers a different twist to the flavour of my juices.

It will be interesting to see if any other companies try the Clapton Mesh in their coils and whether it’ll become a new standard of pre-built coils in sub ohm tanks.

I have to give credit to Mike Vapes and Augvape for trying something new with sub ohm tanks too.