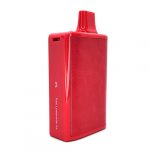 Horizon Tech have released their first ever line of disposable vapes, Binaries Cabin. Horizon Tech is the same company that brought us the Falcon King, Falcon 2 and the Sakerz Master, some of the top selling sub-ohm tanks.

The Binaries Cabin is a very large disposable. It is bigger than most disposables, and even bigger than some of the box mods that we have been reviewing lately. Each one comes prefilled with 20ml of ejuice and claims to have up to 10,000 puffs. They offer 21 different flavors and three different nicotine strengths: 20mg, 30mg, and 50mg.

The Binaries Cabin sports an adjustable airflow that allows for a loose MTL draw as well as a RDL draw. It has a 650mAh rechargeable battery that can be charged using a Type-C charger. You will most definitely have to charge this device numerous times to use up the 20ml of ejuice inside.

The Binaries Cabin disposables are something different, but can they deliver the top notch flavor that we expect from Horizon Tech?

The Binaries Cabin is quite a large disposable. The device has a height of 97mm, a width of 53mm and a depth of 26mm. This device is actually almost larger than the Voopoo Drag 3. This does not make it the most portable device on the market. You may not be able to fit this in your pockets, but it should fit in a bag no problem.

The entire device feels fairly solid and well made. The mouthpiece is very comfortable to use and the draw activation works without delay. At the top of the Binaries Cabin device, opposite the mouthpiece, there is a place where you can attach a lanyard. Unfortunately, they do not supply a lanyard when you purchase the device, but if you own one already and prefer to wear your device then it does have that option.

On the flat, front side of the device you can find the flavor and nicotine strength printed in white. The font is a little small and the color could be darker but it is visible and the average person should be able to read it.

The base of the Binaries Cabin device is where you will find your air flow adjustment, LED light indicator and the Type-C charging port. The airflow adjustment is a circular dial that you twist to adjust. It allows you to open the airflow completely or turn it to close it to just a tiny little hole.

The Binaries Cabin comes with a built-in 650mAh rechargeable battery. This is a fairly small battery for a disposable as we have seen some devices come with a 980mAh battery. However, as it’s rechargeable, there should be no issues with getting to use up all the ejuice before having to dispose of it.

The puff indicator at the bottom of the device lights up each time you take a draw. The 2 blue lights are very small and pretty discreet. 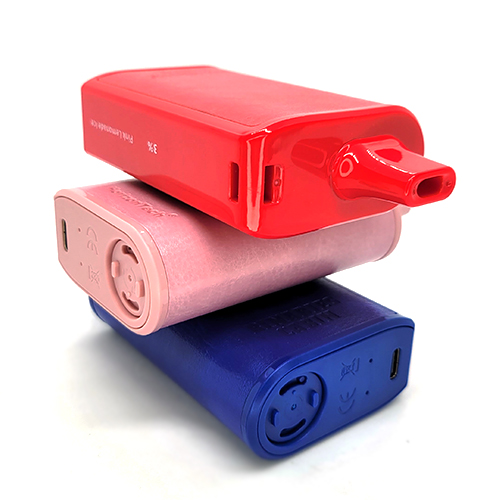 The Binaries Cabin comes prefilled with 20ml of ejuice and claims to reach up to 10,000 puffs before the device is done. This is an insane amount of ejuice. For example a standard bottle of nicotine salt ejuice comes in 30ml bottles. Wow, just wow. The advertised 10,000 puff count is also unheard of but with that much ejuice I am not surprised at all that you can reach up to 10,000 puffs.

One of the great things about this device is that it comes in 3 different nicotine strengths: 20mg, 30mg, or 50mg. This allows all vapers needs to be met as some people require a higher nicotine strength than others.

I personally found the Binaries Cabin to look a little cheezy at first. I wasn’t a fan of the fact that they tried to design the device to look more like a box mod than your standard disposable. However adding the leather-like wrap does make it look a little more finished and the shape of the device grew on me.

The device is well made and there weren’t any issues with cracking or breaking while I was testing them. The leather-like material also held up well and did not peel. I did a drop test and the device held up without breaking. 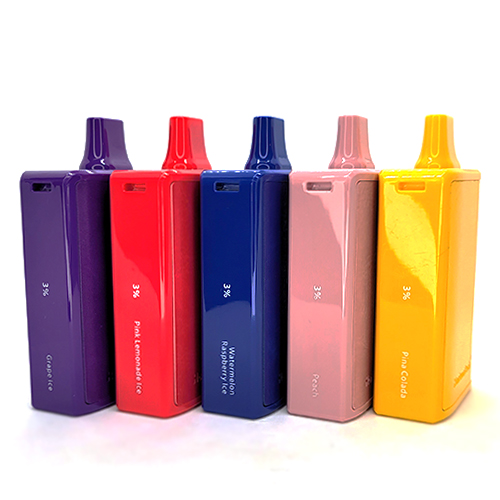 The Binaries Cabin line of disposables comes in 21 flavors and they truly have something for everyone. They do offer mint and non-mint options. Most of their flavors are either fruit or beverage flavors. Two of the more interesting flavors they offer are White Chocolate Matcha Ice and Cherry Cola Ice.

For the purpose of this review we will be going over 10 of the flavors that they offer. These flavors are: Grape Ice, Green Grape Apple Ice, Watermelon Raspberry Ice, Orange, Strawberry Banana, Pink Lemonade Ice, Peach, Pina Colada, Cherry Cola Ice and White Chocolate Matcha Ice.

The grape ice flavor is so tasty. Strong notes of grapes linger on the tongue long after you exhale. Combine that with a light cooling on the exhale and it’s one of the best grape disposables I’ve ever had. It’s sweet, but not too sweet.

This flavor is kind of a creeper. I can taste watermelon immediately and was a little disappointed that I couldn’t taste the raspberry flavor. However, the raspberry creeps up a few seconds after you exhale and you can taste it settling on the tongue. The cooling is a little bit stronger with this flavor.

The Binaries Cabin orange flavor is really good and is one of my favorites. I would have to say this tastes more like a tangerine than an orange but nonetheless a great flavor. There is no cooling on this one and it’s the perfect amount of sweetness.

This pink lemonade ice flavor is one of the sweetest that I reviewed. You can taste the sweet lemonade mixed with hints of strawberries and raspberries. The cooling is rather subtle with this flavor but is still there, making it a great summer flavor.

This peach flavor is really nice. I wouldn’t say it tastes like a peach fruit, I would liken it more to the peach fuzzy candies. It’s a little on the sweeter side, so if you’re looking for something not candied I would skip this one. There is also no cooling with this flavor.

Pina Colada was another one of my favorites from this line. It tastes just like the beverage and takes me to the beach with every draw. It has a great combination of pineapple and coconut mixed with a light cooling. This one is not too sweet either.

This is one of the more interesting flavors from the Binaries Cabin line. It tastes exactly like a Cherry Coke on ice. You taste both the cherries and cola flavor immediately upon inhaling and the cherry sets on the tongue long after the exhale. The sweetness is also just right.

This one was my least favorite. I am not a huge fan of matcha anyways but mixed with the white chocolate it was just a little too much for me. You can taste the white chocolate right away but then the matcha settles on the tongue and it quite frankly tastes very grassy. The cooling was also a little strong for me. 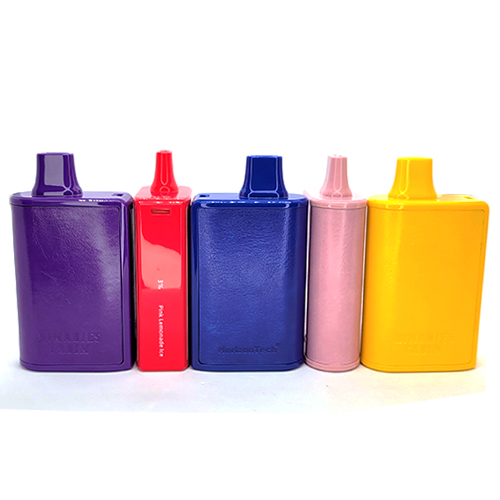 The Binaries Cabin line of disposables have a lot to offer. I am a big fan of a lot of flavors and they offer 21 different options. With this many, it’s hard to not have something for everyone. They are also prefilled with 20ml of ejuice, almost two thirds of what you would get when you purchase a standard bottle of nicotine salts.

The draw of the Binaries Cabin is also very pleasant and I was very satisfied with the 30mg strength. The 50mg strength provides a noticeably stronger draw that will be great for heavy smokers just getting into vaping.

I had no issues with leaking while using any of the Binaries Cabin disposables that I used for this review. I didn’t have any dry hits either so the wicking seems to be up to par. I also found the draw activation to work every time and didn’t have any issues with the sensitivity.

The Binaries Cabin are one of the largest disposables I’ve gotten my hands on. They come prefilled with 20ml of ejuice and are available in three different nicotine strengths: 20mg, 30mg, and 50mg. They have a 650mAh rechargeable battery which is great because you will definitely need to recharge these in order to reach the advertised 10,000 puff count.

Many devices are going in the direction of being disposable, while having many of the perks of a pod or mod device. The Binaries Cabin is one of these disposables. With the rechargeable battery, adjustable airflow and large ejuice quantity, the only thing they are missing is a display screen and the ability to be refilled. With all of these perks, I think it’s one of the best devices for a beginner while also meeting the needs of a more experienced vaper.

If you are looking for an easy to use device with good flavor that also offers up to 10,000 puffs before having to replace, this may be the perfect device for you.