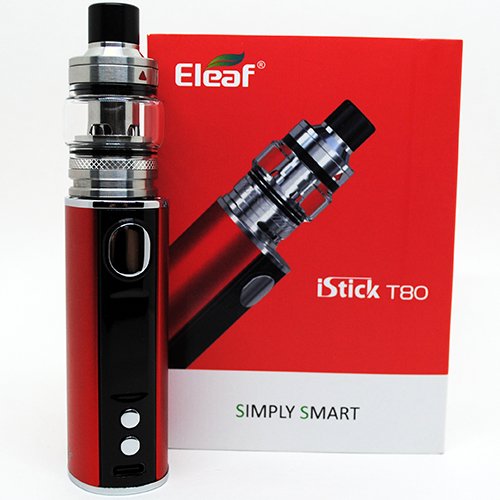 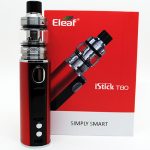 The iStick T80 is the latest vape mod from Eleaf and the successor to the iStick TC40W. We’ve done reviews on quite a few of Eleaf’s products this year like the iStick Amnis 2, Eleaf Rotor tank, Eleaf Tance Max pod vape, iStick Mix box mod, and iJust 21700 vape pen, just to name a few.

The iStick line of devices have always been appealing to new vapers because they have good performance and are easy to use but are relatively cheap when compared to other mods. You won’t get the most premium device or the most features with the iStick line but you will get a device that is reliable and works well.

The iStick T80 will do wattage, temperature control and bypass modes. It has a wattage range of 1 to 80W and uses an internal 3000mAh battery; decent specs. I’m reviewing the T80 kit today which comes with the Eleaf Pesso sub ohm tank. It’s got a 5ml eliquid capacity and comes with two coils. Interestingly, it’s got an airflow control ring that is adjustable to what looks to be a MTL setting.

If you’re new to vaping, should you pick up the iStick T80 kit? Read on to find out.

I was sent this kit by VapeSourcing for the purpose of this review. 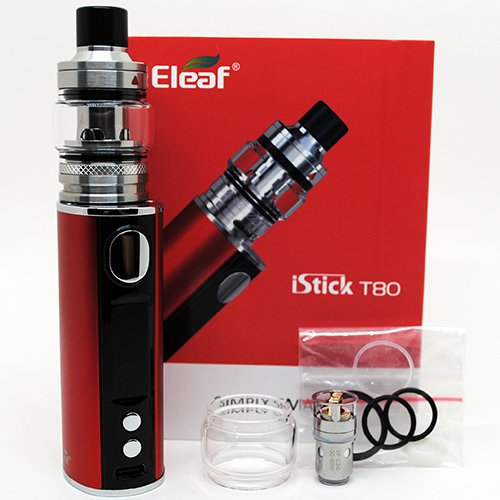 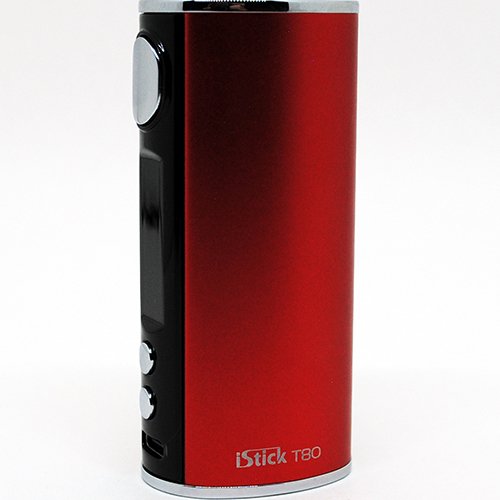 The iStick T80 is an oval shaped mod with no sharp edges. The contoured body fits the curve of my hand and is very comfortable to hold. I can’t find what it’s made of anywhere online but it’s really light compared to other built in battery mods so I’m guessing that it’s made of aluminum alloy. It’s also only 78mm tall, 28mm wide and 36mm deep — tiny for a box mod that takes a tank.

The entire body of the T80 is painted in a matte metallic color and the paint has stood up quite well so far. No scratches or knicks in it yet. There’s minimal branding with a small Eleaf logo on one side of the mod and iStick T80 written on the other side.

The top of the T80 has a silver mirror-finish that picks up fingerprints like crazy. The 510 connector is off-center and positioned towards the back end of the mod. The 510 pin is spring loaded, however there isn’t very much throw to it. The Pesso tank with its 25mm diameter fits perfectly on the T80 and with no overhang when attached but any larger tanks will overhang.

The buttons and screen are located at the front of the T80 and are encased in a shiny black plastic. The buttons have the same silver mirror finish as the top of the mod; they too pick up every little fingerprint. The fire button is large and oval shaped. It’s not firm enough for me and activates way too easily. It also feels a bit cheap. The adjustment buttons are much firmer and feel good.

The OLED screen on the T80 looks a bit old. It works though and it’s bright enough in direct sunlight. It appears a little blurry behind the plastic but this doesn’t affect visibility. 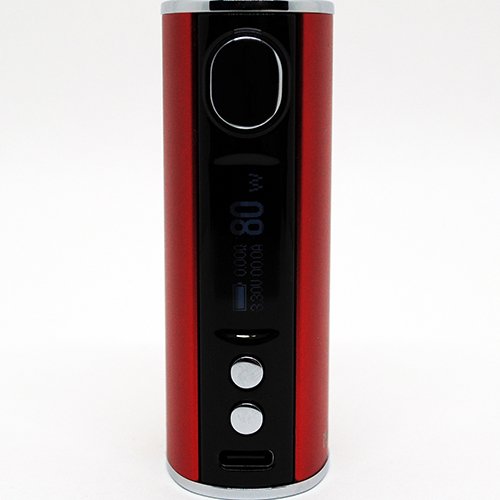 The iStick T80 has a wattage range of 1-80W. This makes it a mid-wattage device that is suitable for builds of 0.3ohm and above. Resistances lower than 0.30ohm would require higher wattages that the T80 just can’t output. Plus, vaping at the maximum 80W would drain the battery quickly.

Pressing the fire button three times opens up the modes menu. Here you can select any of the previous mentioned modes as well as the TCR modes. There are three TCR settings that you can set to different values: M1, M2 & M3.

In VW or Bypass modes you can hold the up adjustment button and power button to open up the settings menu. Here you have a few options:

To set the wattage in TC mode, press the fire button four times. You can also lock the coil resistance by holding the up adjustment button and power button to open the menu.

Select manual modes M1, M2 or M3 to use TCR. Once selected, hold the up adjustment button and power button to open the menu. Then scroll to the fourth option to set the TCR value.

A rather full set of modes & settings for an iStick device, that’s for sure.

For being so small and light, the T80 has an impressive 3000mAh battery packed into it. It also charges using USB Type-C for fast recharge times.

The T80 has been good to me during my testing. When used at 35W with the included 0.6ohm coil I was able to vape for two days before it died. Impressive usage time. When used at 60W though, I experienced much shorter battery longevity; about a day of use.

Recharge times are stellar. The 3000mAh battery charged back up to full in just around an hour and 15 minutes. That’s crazy fast for such a large battery! I’m used to 1000mAh batteries taking an hour or longer to charge with micro-USB. That being said, the T80 charges considerably quicker.

The Pesso is a 25mm diameter tank. It uses a basic 510, straight drip tip but I found it acceptable to use. It’s got knurling just above the airflow control ring and this design reminds me of the OFRF NexMesh tank.

The top cap is slide to fill and easy to push. Almost too easy to push. It’s firm enough that it doesn’t open on its own but I would feel better if it took more effort to open. The fill port is covered by silicone to prevent leaking and it does just that. To fill you have to push your bottle through the slit in the silicone. Filling is easy and straightforward.

I’m using the NA version of the Pesso which includes two 5ml bubble glass sections. I’m glad that they didn’t include a straight glass section because who really uses those? The tank looks good with the bubble glass and has extra capacity, two things that are important to me in a sub ohm tank.

The coils push into the bottom of the tank so the airflow control base has to be removed to gain access. The threading for this piece is rough and isn’t very smooth; it doesn’t feel well machined. Just from the feel of the threading, I’m worried about it stripping over time.

The Pesso has two very wide airflow slots but Eleaf have done something a bit different. One section of the airflow slot is large and open like I’m used to seeing. But beside the large airflow slot there are two differently sized airflow holes.

This airflow configuration looks like Eleaf are going for a hybrid DL and MTL tank but neither the 0.60ohm or 0.30ohm coil seem suited for MTL vaping. Weird. 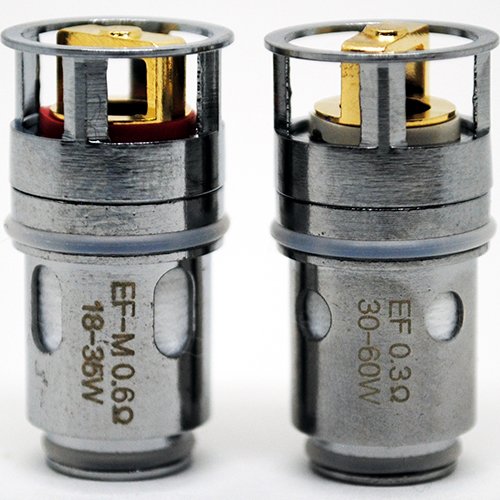 The coils are plug n play; something that a lot of tanks are doing these days. It’s easy to push them in or pull them out and they’re secure once inserted.

I didn’t have wicking issues with either coil so I’m happy with that aspect of their performance. These coils don’t have a lot of cotton so they wick ejuice to the coil really fast. I used a 50/50 and a 70VG eliquid and both coils kept up flawlessly.

Both coils are better suited to direct lung vaping than for mouth to lung due to their resistance, bore size and wattage requirements. I know that Eleaf made the Pesso adjustable to a MTL setting but it just doesn’t work with these coils. The vapor is too hot and becomes almost flavorless when vaping with just the two small airflow holes.

I’ll start with the performance of the T80 mod: it’s everything an iStick mod should be. It is relatively easy to use but still has a lot of features and modes. It fires nearly instantly when I press the fire button and certainly feels like it’s outputting the correct wattage.

Temperature control mode has been improved from previous iterations. It’s not a DNA mod by any means but it’s decent at TC. My cotton never got burned but it waits to throttle a little too long. Like I said, decent TC performance. If you’re just starting to explore using TC mode then this mod is a good one to do it with.

As for the Pesso tank I’m surprised by the flavor. Kit tanks are usually average or below average but the Pesso is definitely better. The coils take a half tank to break in but once they do the flavor and vapor are good.

Out of the two, I preferred the 0.60ohm coil. I felt like it was underpowered at 35W so I pushed it slightly higher to 40W. I kept the large airflow slot about halfway closed for a partially restricted direct lung hit. It’s a flavorful vape that any beginner will enjoy.

Using the 0.30ohm coil is almost as good but it’s a tad less flavorful. I vaped this coil right at its recommended limit of 60W with the airflow configured in the same way. There isn’t a difference between the draws of these two coils. But again, these aren’t meant for MTL. I tried and I was disappointed by the lack of flavor.

Eleaf have stayed true to what made the iStick line so popular in the first place: ease of use and good performance. I’m most impressed by the mod in this kit because the battery life is excellent when used at low or mid wattages. The TC performance is also quite good.

The Pesso tank is good for coming included with a kit but it’s not a MTL tank. It’s a flavorful direct lung tank that, while not a top-notch tank of the year, is good enough for a beginner to enjoy vaping.