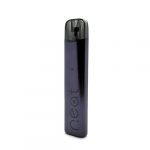 The Yearn Neat 2 is a new pod vape from Uwell, the same company that makes the crazy popular Caliburn devices.

Uwell have long dominated the pod vape market; first with the original Caliburn and Caliburn Koko, and then with the Caliburn G and Koko Prime. All of these devices received rave reviews and high recommendations and, honestly, it was well deserved. To this day, I believe that the Caliburn G is still the best pod vape that you can get and most of the team here at Versed Vaper feel the same.

But if the Caliburn G is so good, why did Uwell release the Yearn Neat 2? Good question but I think that I’ve figured it out. The Caliburn G and Koko Prime both use replaceable coils which is a change from the originals that used pods with the coils built in.

The Yearn Neat 2 here is a return to the “true” pod vape. It does not use replaceable coils and instead uses pods with built in coils. It’s also purely draw activated with no buttons at all. This makes it a straightforward and very beginner friendly device and I think that is Uwell’s target audience here.

The Yearn Neat 2 uses the same ‘Pro-FOCS’ flavor technology as the Caliburn series so it should deliver flavor that is just as good. Let’s see how it does. 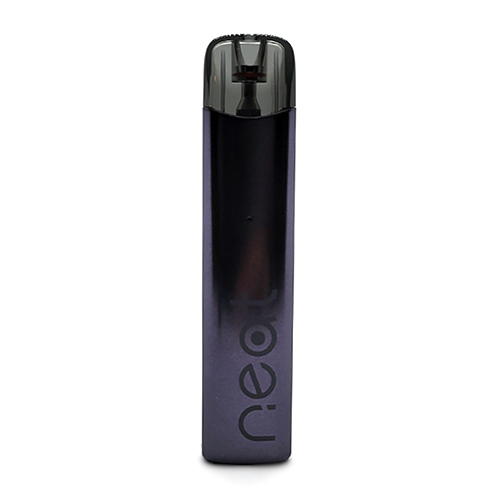 The Yearn Neat 2 is a simple looking device and it really does not have that much going on in terms of the design. It has a long and flat rectangular shape that looks a lot like the Caliburn G, minus the ribbing. The body flexes a little and feels like it’s made of plastic, however Uwell does not state the actual material.

The Yearn Neat 2 is 102.5mm tall, 22.1mm wide, and 11.5mm thick and weighs only 27.9g. This means it’s slightly smaller than the Caliburn G and even more portable. You can easily slip it into a pocket or bag and forget that it’s even there. It doesn’t get much more pocketable than this — some disposable vapes are larger!

It comes in six colors Green, blue, grey, red, black, and orange. It has a shiny finish, although not a mirror finish, and it looks simple but good. One side has ‘yearn’ printed and the other has ‘neat’.

The body scratches and scuffs easily, although on my unit the dark color makes it hard to see and practically unnoticeable. I’ve dropped it a few times and the corners immediately scratched and dented on the first drop. The Yearn Neat 2 is light but this comes with the tradeoff of durability. 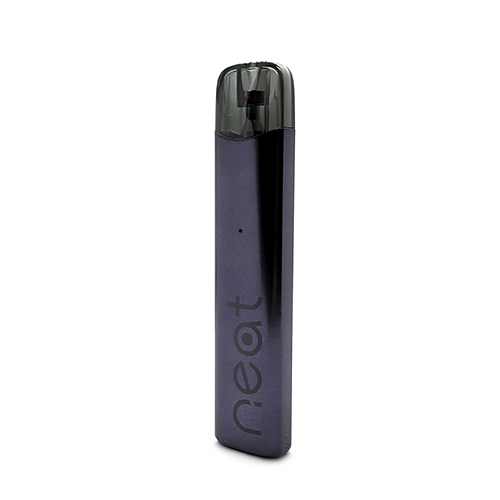 There are no buttons at all on the device. It’s draw activated only; just inhale on the mouthpiece to vape. It will fire at a maximum of 12W and whenever you take a draw, the small LED will light up to indicate your battery charge level.

Overall, the Yearn Neat 2 sports a very plain design but still manages to look good (as long as you don’t drop it or leave it in your bag with your keys!). The build quality definitely does not feel as solid as the Caliburn G and instead feels sort of cheap. It’s not horrible by any means, but it’s not amazing either. 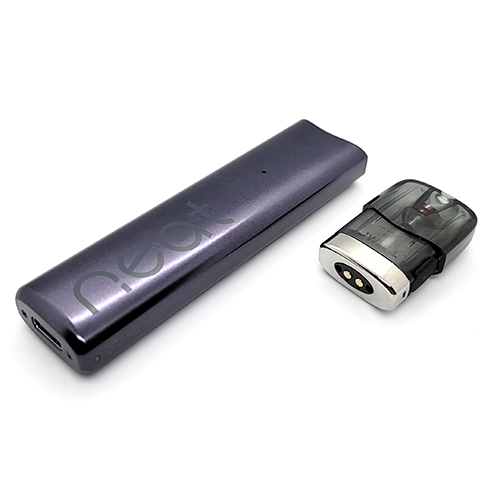 The Yearn Neat 2 is similar to the first generation of Caliburn devices because it uses pods with non-removable coils. The pods come with the coils built into them and once the pod is done, you just throw it out and replace it with a new one. Unfortunately Uwell only provides one pod in the package which I find to be just silly. The pod has a 2ml capacity.

The pod has a slight tint so depending on the lighting conditions it can be difficult to see how much ejuice is left inside of the pod. The pod does have to be removed in order to fill it because the fill bung is located on the side of the pod.

The pod attaches to the battery magnetically and sits very loosely. There is a noticeable amount of wiggle when the pod is attached and it takes very little effort to remove the pod. The pod will easily pop itself out if you drop the device and it can be frustrating to find it.

Inside of the pod is a 0.9Ω mesh coil that is best suited to nicotine salt ejuices but it can also be used with regular nicotine ejuices as well. The coil looks to be similar to the ones for the Caliburn G and Koko Prime and it uses Uwell’s “Pro-FOCS” flavor technology as well. 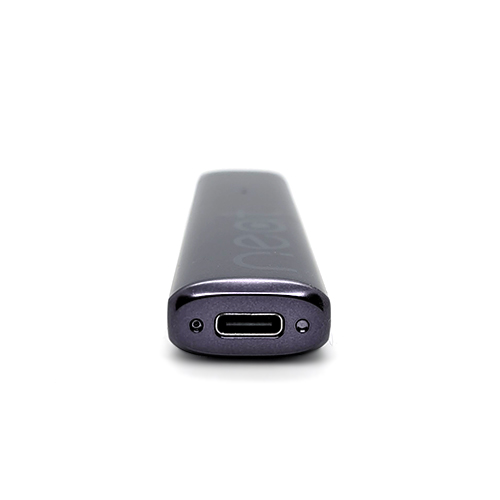 The 520mAh battery on the Yearn Neat 2 may seem small, but because it uses a 0.9Ω coil it actually delivers reasonable battery life. With my heavy vaping I got through about 2 ½ pods and had to recharge every other day. Unless you’re literally a chimney, you can expect the same amount of battery life or longer.

The LED on the front of the device will light up when you take a draw to indicate your battery charge level. There are three colors: green, blue, and red. Green means the battery is at 60% charge or more, blue is 30-60%, and red is less than 30%.

When you charge the Yearn Neat 2 the LED indicator will also light up. It will slowly pulse the LED to indicate that it is charging. Pulsing red is less than 30% charge, pulsing blue is 30-60% charge, and pulsing green is 60-99% charged. The green light will go solid once it is completely charged; it will not turn off. 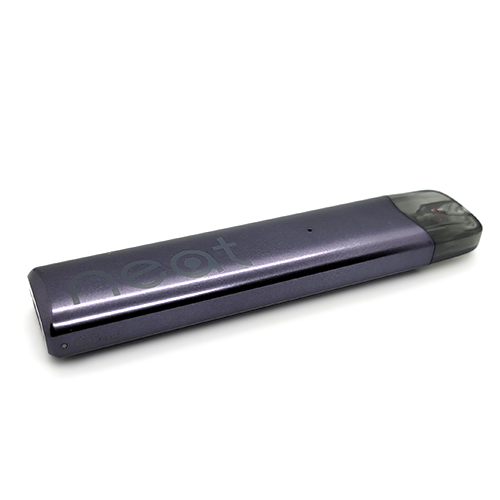 The flavor from the Yearn Neat 2 is just as good as I would expect from the company that makes the Caliburn G. I’m honestly not too surprised either because, as I mentioned earlier, the Yearn Neat 2 uses the same Pro-FOCS coils.

I used a few 50/50 nic salt ejuices, one a 35mg and the other a 25mg. The flavor is top-notch and definitely comparable to the Caliburn G. I taste all of the flavors in my Hakuna by Twelve Monkeys ejuice; fuji apple, granny smith apple, and cranberry. The taste is full, wet, and not at all muted. I also used Melon Berries by Coastal Clouds and similarly can taste all of the melon and berry flavors.

The draw is nice and warm and produces a surprising amount of vapor too. As for the airflow, it’s a medium mouth to lung draw; it’s not tight but it’s also not loose. It’s tighter than the Caliburn G though. All in all, it’s an incredible vape.

I tend to chain vape without even realizing it and which can put a real strain on a wick and coil. The 0.9Ω pod was not even phased. I kept vaping trying to get it to dry out but it just would not, no matter how repeatedly I vaped on it. On the other side of the coin, I did not have any leaking.

The draw activation is perfectly balanced. It does not take much effort to get it to activate and I did not have any issues with it activating by itself.

While the design could use some sprucing up and the build quality could be improved, the performance of the Yearn Neat 2 is superb. It delivers top level flavor and a very nice draw which are only rivaled by the best pod vapes out there right now like Uwell’s own Caliburn G, Vaporesso’s Luxe Q, and Smok’s Novo X.

The simplicity of the Yearn Neat 2 is definitely targeted towards new vapers or those who just want a device that they can vape with without having to worry about settings. It’s not an adjustable device at all though so vapers who want the ability to customize their vape may be disappointed.

That being said, as a vaper who does like to alter their airflow and wattage, I still really enjoyed using it. The Yearn Neat 2 is like a refillable disposable (an oxymoron I know, but hear me out) — it’s just as light and portable, just as simple to use, and it just works. But the benefit of this over a disposable is that you can use your own ejuice, the warmth of vapor and draw are better, and the flavor is miles ahead of the best disposable out there.

Despite the build quality, I can still easily recommend the Yearn Neat 2 purely based on the performance.