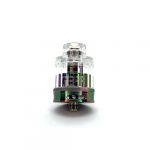 The Gear V2 is a solid RTA. The jeweled design isn’t going to be for everyone, neither is the lack of airflow adjustment. However, it’s a fairly flavorful tank that is easy to build on and the build quality is excellent.

This isn’t the most flavorful RTA on the market, but it does deliver good flavor and a smooth vaping experience. The airflow is one of the smoothest and quietest on any RTA that I’ve used, which is definitely a big pro for this tank.

Who is this tank not for? Well, if you like a restricted DL draw from your tanks, pass on the Gear V2. If you want the most flavorful RTA possible, I also suggest passing on the Gear V2.

Who would I recommend this tank to? First and foremost, this is a great RTA for beginners looking at getting their first rebuildable tank. It’s easy to build on and wick, provided you follow the instructions that I laid out in this review. It’s also a solid option for vapers who like an airy draw and who are looking for a simple, single-coil RTA that doesn’t leak.

The Gear V2 is a new 24mm RTA from Wotofo. It’s the follow-up to the original Gear RTA that, while I never had a chance to use it myself, received praise from vapers for the great flavor and performance that it delivered.

The Gear V2 is similar to the original in some ways, but the overall design and appearance are very different. This is a small single coil RTA, with a 3.5ml capacity and a top filled tank. Most interesting though is the fact that the Gear V2 does not have adjustable airflow. Is this a problem for this tank? I reviewed it to find out.

Wotofo is a popular vaping manufacturer that mainly specializes in rebuildable tanks. They are responsible for great tanks like the Recurve V2, Profile PS, SRPNT RDA, and Troll X RTA, just to name a few.

More recently, Wotofo have released mods like the Mdura Pro, pod vapes like the SMRT Pod Kit, and disposables like the Wotofo Mini+ and Wotofo Wafer. Wotofo is a manufacturer that is dominating the market in all areas, so you never know what they will release next.

With that background information out of the way, let’s jump right into the review.

This tank was sent to me by Wotofo for the purpose of this review.

In typical Wotofo fashion, you get everything that you need to build on this tank included in the box. That’s one thing that I love about Wotofo products so I’m glad that they are continuing to include coils and cotton with their rebuildables. 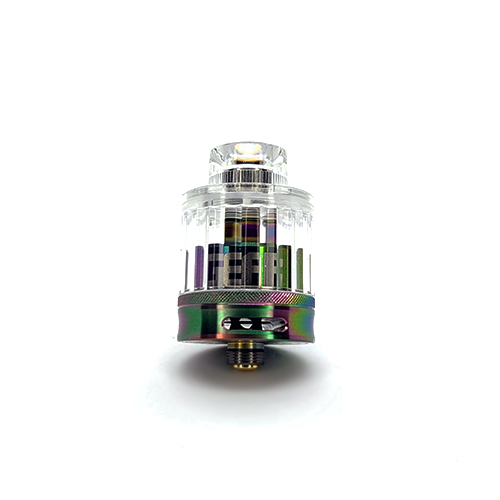 In addition to being made of PCTG, the Gear V2 has an interesting design. The tank is smooth on the outside, but inside the tank there are multiple tall, rectangular facets that give it a jewel-like appearance. At first I wasn’t a big fan of the design but it’s grown on me in the few weeks that I’ve been using it. You’re either going to love the design or you’re going to hate it, I don’t think that there’s an in between.

This is a compact tank, only 24mm in diameter and 38.5mm tall including the 510 pin and drip tip. The drip tip is built into the top cap and the opening is very small. The drip itself is about the size of an 810 drip tip, but with an opening that is even smaller than a 510 drip tip. 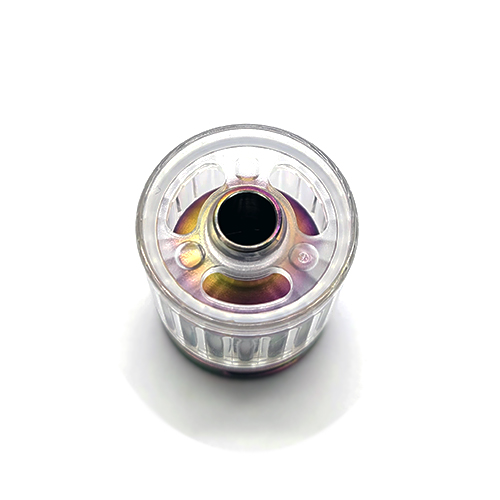 To remove the top cap just unscrew the drip tip counter-clockwise. The threading is smooth and feels great. Once you remove the top cap you’ll be greeted by three large kidney shaped fill holes. There’s an o-ring here to prevent leaking through the top cap and the fill holes are also slightly recessed for extra security. The fill holes are large enough to fit all sizes of ejuice bottle nozzles and I had no issue filling with either 60ml or 100ml bottles. The tank will hold up to 3.5ml of ejuice which is a good amount for an RTA. 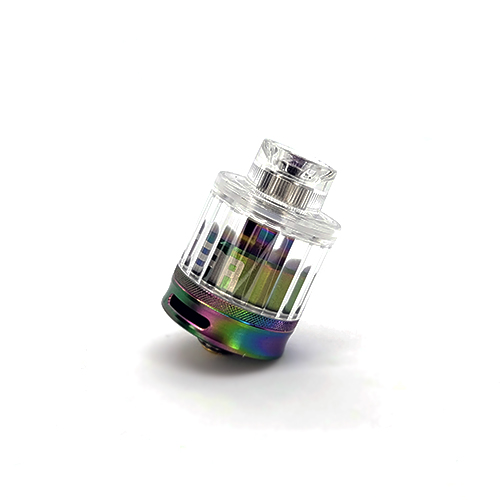 Wotofo states on their website that the Gear V2 “has the optimal air amount calculated by our engineers”. We will see if this is the case a little later. The product page also states that “such design eliminates condensates seeping down through the gaps when there’s a control ring”. Now this I can see as a valid reason for eliminating the airflow control as long as it provides a good draw that isn’t too airy.

Building On the Gear V2 RTA

The Gear V2 has a build deck that is similar to the original. This time however, there are only two posts instead of the four posts that were on the original. The Gear has always been a single coil RTA, but the original allowed you to install coils that were wrapped either clockwise or counterclockwise. This is no longer the case with the Gear V2 which only accommodates clockwise wrapped coils.

The two posts are on opposite sides of the deck which means that your coil legs have to be going in opposite directions in order to be installed. These posts use beefy flat head screws in order to secure the coil legs. In the middle of the deck there is an airflow hole that will funnel air from the side airflow slots to under and around your coil. On either side of the deck are the wicking ports.

The coils that Wotofo includes in the box are perfect for installing on this deck. These are 3mmID, framed staple clapton coils made of Ni80. The coil legs will be facing the same direction when you take them out of the package, but all you have to do is use the included coiling rod to get one leg to go the other way. Do not do another wrap to get the coil leg to go in the opposite direction. Instead, unwrap it slightly.

Also, while you have your coil on the coil rod, space the coil out a little. This will make for the best fit on the deck, and will also ensure even heating of the coils.

At this point you can dry fire your coil and strum it with a pair of tweezers to eliminate any hot spots. If you spaced out your coil like I recommended then you probably do not need to do this step. I do it anyway just to be sure.

Once the coil has cooled down we can move on to wicking. I used the included cotton that Wotofo provides in the box. Thread the cotton through the coil and center it with the coil. Drape the cotton over the sides of the build deck and cut it to just around the airflow holes. I also suggest combing out your cotton with your tweezers or a flat head screwdriver to ensure consistent wicking.

Tuck your cotton into the wicking holes on the sides of the build deck. If it’s too tight, you may want to comb out your cotton some more. It should be snug and fill up the whole wicking port, but not so tight that you have to jam it in there.

Take your bottle of ejuice and juice up the coil and wicks good. Reinstall the tank and make sure that it’s screws on properly. Now remove the top cap and fill the tank up. I suggest waiting for 5-10 minutes for the wicks to fully and properly saturate before vaping.

This is a simple deck to build on, it’s just a matter of spacing the included coils and installing them correctly with the legs on the outside of the screws. 3mm ID coils fit perfectly and I honestly would not go any larger. The screws secure the coil legs nicely too so I don’t have any major complaints.

The Gear V2 is a fixed airflow RTA. This means that the airflow is non-adjustable and the airflow slots remain wide open. There is no airflow control ring.

With one of the included 3mm ID coils installed the airflow is airy but there is a very slight touch of restriction. It’s barely noticeable, but it’s there. As a result, the Gear V2 does not provide what I would call “too airy” of a draw but instead, a nice airy draw. When I’m vaping it, I do sometimes want to close off the airflow a little bit more but it is still an enjoyable draw as it is.

The draw is also very smooth, quiet, and free of turbulence. It’s actually surprisingly smooth. It’s one of the smoothest and quietest draws that I’ve had on an RTA and with the amount of tanks that I’ve tried, that’s saying a lot.

The short and sweet of it is that if you prefer a restricted DL vape, this is not the tank for you. However, if you like an airier draw that is smooth and quiet, that is exactly what the Gear V2 delivers. 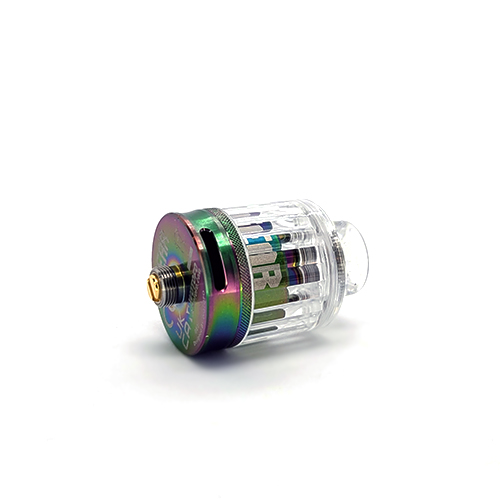 I built the Gear V2 using one of the included framed staple clapton coils and the included cotton strip. The coil came out to 0.36Ω. I used Reds Fruit Mix ejuice in 6mg strength for the duration of my testing.

Flavor is good from this tank, even with the wide open airflow slots. I believe that the flavor could be even better if there was an airflow control ring that could close down the airflow, but it’s a flavorful experience nonetheless.

Wotofo recommends 40-55W for this coil. I vaped at 50W and got warm, dense vapor with pretty big clouds too. Vaping at 55W felt just a little too hot for me. But no matter at 50 or 55W, wicking kept up fine with chain vaping and long draws.

Thankfully I did not encounter any leaking from this tank. The only place where it can even leak from is the airflow slots and although there was some condensation in there, it was typical amounts and no ejuice whatsoever.

Something that I like about this tank is that it’s simple to use. You just install a coil, wick it, and fill the tank. That’s it. You’re vaping without having to fuss with adjusting the airflow just right. Again, I think airflow adjustment would be welcomed on this tank but it does make it simpler without it.

The Gear V2 is a solid RTA. The jeweled design isn’t going to be for everyone, neither is the lack of airflow adjustment. However, it’s a fairly flavorful tank that is easy to build on and the build quality is excellent.

This isn’t the most flavorful RTA on the market, but it does deliver good flavor and a smooth vaping experience. The airflow is one of the smoothest and quietest on any RTA that I’ve used, which is definitely a big pro for this tank.

Who is this tank not for? Well, if you like a restricted DL draw from your tanks, pass on the Gear V2. If you want the most flavorful RTA possible, I also suggest passing on the Gear V2.

Who would I recommend this tank to? First and foremost, this is a great RTA for beginners looking at getting their first rebuildable tank. It’s easy to build on and wick, provided you follow the instructions that I laid out in this review. It’s also a solid option for vapers who like an airy draw and who are looking for a simple, single-coil RTA that doesn’t leak.