Home » Reviews » Wotofo Wafer Disposable Review: Should You Get Them?
DisposablesReviews

Wotofo Wafer Disposable Review: Should You Get Them? 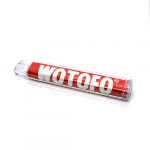 Wotofo is the latest vaping company to try their hand at disposable vapes. Wotofo is best known for their rebuildable tanks like the SRPNT RDA, Profile 1.5 RDA, Recurve Dual RDA, and Profile M RTA. Since their success with rebuildables, Wotofo has also released sub ohm tanks, vape mods, and pod vapes.

Now, Wotofo is adding disposables to their product line up. They’ve recently released seven lines of disposable vapes and I will be reviewing three of them in the coming weeks. Today, I’m hands on with the Wotofo Wafer disposables.

Their Wafer disposables come in ten flavors and are a “traditional” disposable. They are small and light, with a 400mAh battery and come filled with 2.2ml of ejuice for up to 600 puffs.

Will Wotofo’s disposables be a hit just like their rebuildable tanks?

These disposables were sent to me directly by Wotofo for the purpose of this review.

The first thing that you’ll notice about Wotofo’s Wafer disposables is that they are extremely colorful and so they stand out like no other disposable around. They do look good though. I think stylish is the best way to describe them, but they are certainly not discreet.

Each Wafer disposable has a colored paper insert that is encased in a clear shell. The color of each one relates to the flavor that it holds and the flavor is also labeled so you can tell which one you’re picking up. The flavor is printed in extremely small font though so you have to really look to see it.

On top of how loud the colors are, the branding is almost obnoxious. WOTOFO is plastered in huge font across the whole disposable, along with WAFER and typical certification markings. The mouthpiece is one piece with the body and is comfortable to use

Compared to the large 10ml+ capacity disposables that have been coming out recently, these are more “traditional”; they’re small and light. And while they don’t have huge amounts of ejuice, they are much very portable. Each Wafer comes filled with 2.2ml of either 50mg or 20mg of nicotine salt ejuice. This makes them good for approximately 600 puffs.

The airflow hole is at the bottom of the Wafer. The airflow is non adjustable so you get what you get. It’s a tight MTL draw and it closely replicates the feeling of drawing on a cigarette. There’s also a white LED that lights up whenever you take a draw. 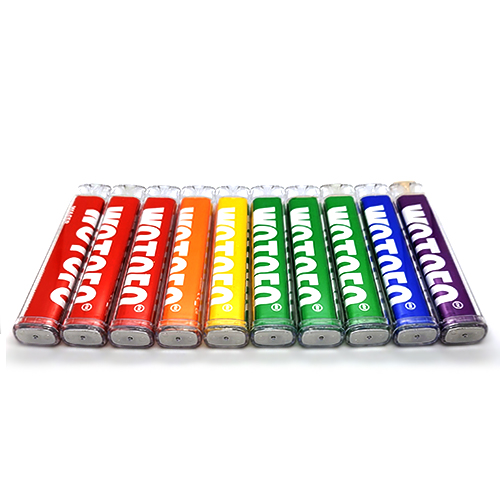 Wotofo Wafer disposables come in 10 flavors. I was sent all 10 flavors to try for this review. The flavors are mostly fruit and menthol flavors but there are some pure fruit flavors as well. The

I like that Wotofo has gone with the flavor of natural blueberries and raspberries rather than candied. It’s still pleasantly sweet though. Raspberry flavor comes in quite heavily on the exhale which is nice too. There isn’t a lot of cooling here for an ice flavor but I like it.

It’s like a grape soda but with a little cooling added in too. This is one of my favorite flavors of the lot. The sweetness is just right and the grape flavoring isn’t too artificial tasting. It’s a really good flavor for anyone who likes grape vapes.

This tropical mix is really nice. Guava and passion fruit are the main flavors that I taste on the inhale, followed by a subtle flavor of kiwi on the exhale. It’s slightly sour, mostly sweet, and all around tasty. No menthol at all here.

This is like a stick of freshmint gum. There isn’t a lot of gum flavor but that’s what it reminds me of. It’s a nice sweet mint and it’s refreshing to vape on. For a mint flavor though it’s not as minty as I’m sure some would like.

From what I can taste this is really just a pineapple flavor. I don’t taste a lot of coconut. There is a little coconut flavor right at the end of the exhale but it’s 95% pineapple. I think what the coconut does is make the pineapple a little less sour and brings out the sweetness a touch more but I don’t taste the coconut much. Good flavor though.

This is another one of my favorite flavors. I’m partial to any sort of apple flavor but this one is spot on. It’s slightly tart with a nice balance of sweet green apples. Any fan of apple flavors will definitely enjoy this flavor. I highly recommend it.

Strawberry banana is a tried and true flavor and a staple in any disposable brands lineup. While I don’t think that this one is any better than all of the others out there, it’s a solid flavor. The mix is perfect, half strawberry and half banana. It’s like a strawberry banana smoothie, complete with the menthol chill to round it all out.

This gives off the flavor of a strawberry milkshake, complete with a little vanilla to really sell the flavor. This flavor isn’t really for me but I have to give props where props are due. It’s hard to recreate a flavor like this and Wotofo has done a really good job.

If you vape on disposables a lot then you’ll be familiar with this flavor. It’s also known as “Lush Ice”. The watermelon in this disposable is super strong and pronounced. It’s not quite candied, but not natural either. Rather than emphasizing just the sweet taste of watermelon, the watery taste is really pronounced. It’s a different take on a watermelon flavor and one that I enjoy vaping. 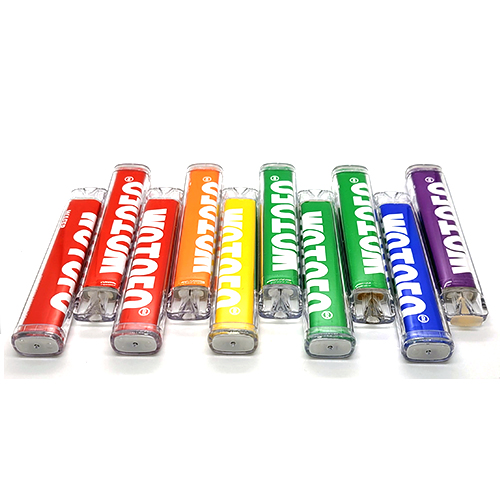 Each Wotofo Wafer disposable comes prefilled with 2.2ml of nicotine salt ejuice in either 50mg or 20mg strength. This makes each one good for up to 600 puffs. I did my best in counting my puffs and I managed to get 500+ counted puffs out of a few of these before they ran out. I did miss counting my puffs at times so the 600 puff count seems accurate.

Concerning the draw, it’s a tight mouth to lung draw that closely mimics and replicates the draw that you would get from smoking a cigarette. It’s not too difficult to activate the draw activated firing which is good. No one wants to struggle to vape!

The vapor that I get from each one is smooth and satisfying. I’m using the 50mg strength disposables and they aren’t harsh at all. The draw is pleasant but still delivers the nicotine that I’m looking for. They taste great too, which is obviously a main factor when choosing a disposable brand.

Quality control is good. I haven’t had any issues at all with any of the 10 disposables that I was sent to review. They all worked out of the packaging and I haven’t had any instances of them malfunctioning at all. None of them have leaked either. Because of the one piece clear shell there really isn’t a spot for them to leak from other than the mouthpiece, but I haven’t had any ejuice leak from there nor any spitback.

The main drawback to Wotofo’s Wafer disposables is one that has nothing to do with performance — the design. Each of these just screams for attention with their colorful shell and design. If this doesn’t bother you then there really isn’t any reason why you shouldn’t pick these up. The flavors are all great and the performance is exactly what you would hope for from a disposable vape.

Another con is that there are very few non-menthol flavors and Wotofo does not offer a tobacco flavor. However, if you like fruit and menthol combos, these are some of the best that I’ve tried. Highly recommended.